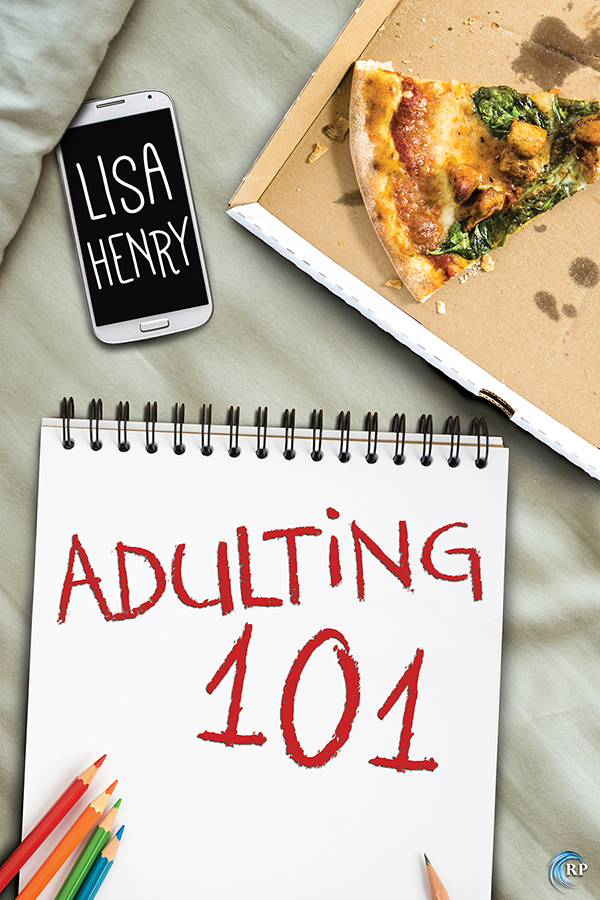 Hi, and welcome to the blog tour to celebrate the release of Adulting 101 by Lisa Henry. I’m visiting some of my favourite blogs around the place to talk about writing Adulting 101, some of my influences and inspiration, and even sharing an excerpt or two! Don’t forget to leave a comment for your chance to win a prize!

The struggle is real.

Nick Stahlnecker is eighteen and not ready to grow up yet. He has a summer job, a case of existential panic, and a hopeless crush on the unattainable Jai Hazenbrook. Except how do you know that your coworker’s unattainable unless you ask to blow him in the porta-potty?

That’s probably not what Dad meant when he said Nick should act more like an adult.

Twenty-five-year-old Jai is back in his hometown of Franklin, Ohio, just long enough to earn the money to get the hell out again. His long-term goal of seeing more of the world is worth the short-term pain of living in his mother’s basement, but only barely.

Meeting Nick doesn’t fit in with Jai’s plans at all, but, as Jai soon learns, you don’t have to travel halfway around the world to have the adventure of a lifetime.

This is not a summer romance. This is a summer friendship-with-benefits. It’s got pizza with disgusting toppings, Netflix and chill, and accidental exhibitionism. That’s all. There are no feelings here. None. Shut up.

You can find out more about Adulting 101 at Riptide.

Lisa likes to tell stories, mostly with hot guys and happily ever afters.
Lisa lives in tropical North Queensland, Australia. She doesn't know why, because she hates the heat, but she suspects she's too lazy to move. She spends half her time slaving away as a government minion, and the other half plotting her escape.
She attended university at sixteen, not because she was a child prodigy or anything, but because of a mix-up between international school systems early in life. She studied History and English, neither of them very thoroughly.
She shares her house with too many cats, a green tree frog that swims in the toilet, and as many possums as can break in every night. This is not how she imagined life as a grown-up.

Each comment on this blog tour enters you for a chance to win a $20 Riptide credit and an ebook of your choice from my back catalogue. You’ll also win a super secret cute little gift that’s very close to my (and Nick’s) heart! Entries close August 20, and contest is not restricted to US residents. Remember to leave your email address in the comments so I can contact you if you win!

I really enjoyed reading this book. The leads are in totally different places in their lives. It’s a coming of age story for Nick and kind of a reevaluation of some things for Jai. I love how it manages to be a M/M romance without the focus being on their sexual orientation, acceptance of it and such. I think this is a story that’s relatable to many. Nick has grown up privileged. He knows it. But now that he’s an adult, he doesn’t feel equipped to handle life even though he really doesn’t have an excuse. Adulting is hard. I totally agree.