Meant For Him by D.H. Starr Blog Tour Review 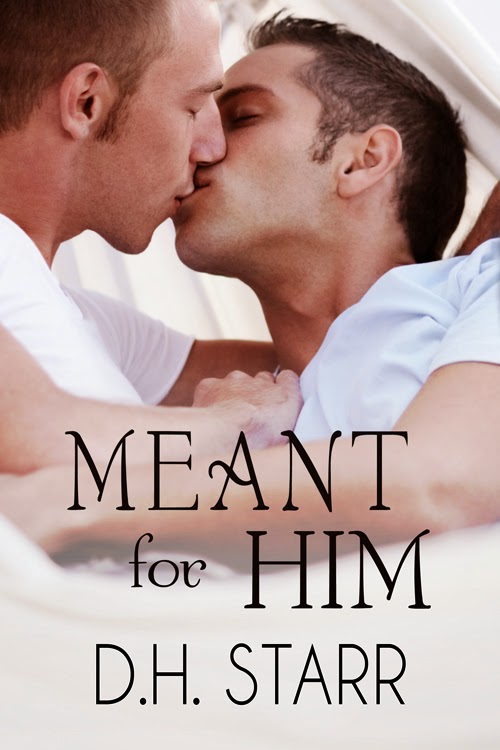 Another hot guy from Greenwich Village is about to meet his match. That is, if he doesn’t mess things up…this time.

After the failure of his relationship with Jeremy, Andrew Jamieson threw himself into a routine his high powered job on Wall Street and workouts. After two years, however, he is unable to quell the longing in his heart for that special someone. Feeling hopeless, Andrew resigns himself to life of work and living alone in his pent house apartment. That is, until he's fixed up with Peter, the local bartender in Jeremy’s favorite watering hole in the East Village. Peter is hot, sweet, sensitive and…masterful. Peter brings out a side of Andrew he never knew he had. And he can’t get enough. However, the same difficulties Andrew had with Jeremy threaten to rear up and ruin his chances with Peter. Will Andrew love Peter enough to let himself have the one guy in the world who could be meant for him?

D.H. Starr is a product of the 80s who should have grown up in the 60s and wishes he could travel through time to visit the Ancient Romans and Greeks so he could wear togas and be considered in-style. He loves to torment his characters before giving them their happy ending, enjoying the way they struggle and change from beginning to end. On his off-time, he can be found parading naked through the woods, searching for mystical creatures who he swears do exist. Once he finds the portal to their world that will be the last you see of him. His favorite quote comes from the musical Rent, “No day but today” and he loves the song Seasons of Love because its message is so true.

Your Choice, use either Giveaway #1 or #2 or you are welcome to use both.

(You can run this giveaway in any way you see fit.  When you have your Winner, please send their name and contact information to me via email, I will forward it on to Doug.)


R-Rated
Each exercise tormented a distinct part of his body. There was precision to the work as he focused within, as if he were able to command individual cells to do their part. Mechanically he progressed from core to limbs as he broke down muscle tissue so it could build back up even stronger.
As one hour passed and the next was well underway, Andrew continued his circuits until he’d stretched and pulled every fiber of himself. He finished his workout with a thirty minute run on the treadmill.
Once done, he stepped off the machine, panting. He ran an internal check, trying to sense any lingering stress.
His mind was blessedly clear as he carried himself down the stairs to shower and change. There were just as many men as when he’d arrived earlier, but Andrew wasn’t focused on them. The ache from his workout still throbbed in his body and the penetrating heat of the steam room beckoned him.
He made quick work of undressing, aware of the glances he received but ignoring them. With a skimpy towel, which seemed to be a staple at all sports clubs, barely clinging to his hips, he entered the small tiled area. Immediately assaulted by thick billows of vapor, Andrew stood in the middle of the room gaining his bearings. Slowly, he was able to make images along the benches. He worked his way to an empty spot where he could have some space.
There were two guys just to his right stroking each other’s cocks. Their eyes were fixated on the objects in their hands. When the man closest to Andrew leaned over and took the second guys cock in his mouth, Andrew closed his eyes and leaned his head back against the wall.
For several minutes he simply breathed in and out through his nose. The door opened and closed a few times and the slurping noises next to him continued, but Andrew pushed each distraction aside, focusing on the wet heat in the room. As little as two or three months earlier, he would have watched. Maybe even participated. But meaningless encounters held no appeal to him any longer.
The image of Peter flashed behind his closed lids, along with the imagined statement he’d made in Andrew’s fantasy. Let me take care of you. Andrew didn’t need anyone to take care of him. I know what you want. Andrew didn’t even know what he wanted. How could anyone else?
Andrew snapped his eyed open and noticed a man leaned against the wall next to him. Each muscle stood out along his powerful frame and, as Andrew surveyed the physical prowess, he couldn’t help the way his eyes fell naturally to the man’s groin. Long fingers of one hand cupped the package, rubbing gently and doing virtually nothing to hide the sizable lump hidden beneath the towel.
Though the steam blurred Andrew’s vision, he could tell the man was staring at him in open invitation. Had this been another time, if he hadn’t become so aware of his isolation, Andrew would have allowed his covering to slide open and his dick to lay bare for the man to see. He might even allow his hand to drift towards his groin, playing with himself. But none of those impulses or desires surfaced. Instead, Andrew closed his eyes once again, shutting out the obvious invitation.
Rejecting the pass was enough to stimulate Andrew’s thoughts. And the more he tried to concentrate on breathing and relaxing spent muscles, the more his thoughts closed in until they captured one thing.
Peter.
In one day, the man had managed to wedge his way past the walls Andrew’d constructed to hold his desires at bay. And in another day Andrew would have a chance to see the guy in action at the gym. At least he hoped so. After the way he fled Jeremy and Craig’s he wouldn’t be surprised if Peter backed out. Heaviness settled in his chest. Why should he care? He barely even knew the guy. Even if he’d met him a few times and admired him at Phoenix, there was no good reason why he should care if Peter broke their date.
Is that what their meeting at the gym was? A date? Andrew closed his eyes once again. He wondered whether Peter would wear a tee-shirt or a tank. Did he wear sports clothing like Adidas or Nike, or did he simply work out in plain cotton? Did he wear a jock or underwear?
Each question brought new pictures with it and Andrew slid his hand towards his cock, rubbing at the growing bulge. With his palm, he created friction using the rough material covering his skin. His breathing became slightly heavier.
Realizing what he was doing, Andrew opened his eyes to find Mr. Beefcake, who’d stood next to him. He’d moved and was now located directly in front of Andrew, his towel slung over his shoulder.
Andrew gasped, surprised to see the man standing before him. The giant lowered himself to his knees and reached to unhitch Andrew’s towel.
It was as if a light had been switched on. Andrew stood and brushed past the man, exiting the steam room and wincing at the rush of cool air against his skin. Securing the towel on his hips, Andrew scampered to his locker and made quick work of dressing.
The whole time, one question screamed inside his head. Why didn’t I let that guy blow me? The man was hotter than hell and looked like he was ready to provide Hoover action on Andrew’s cock. Yet something had recoiled at the idea of letting someone touch him in that empty, purely physical way.

Meant for Him by D.H. Starr

This book is about two men who have to learn to take opportunities that arise in their lives in order to have a chance at not being lonely. Both are fine how they are but must step out of their comfort zones in order to be in a better place.

"I'm afraid if I try, and get hurt, I might not be able to bounce back and be happy again. At least I know the way things are. I'm not miserable."


Andrew has to learn to give up control sometimes, and Peter has to learn to take charge and go for it. They don't instantly fall into place. Most of the book is them being a work in progress trying to figure themselves and each other out.

In my opinion, the storyline needed more dimension, not necessarily more words, but words used to give the Meant For Each Other universe a more 3D feel. I did like the maturity of the the exes staying a positive in each other's lives and everyone becoming close. It's nice to read a book involving past lovers and not see the petty arguments from those past relationships. In this story, they are actually still best friends after everything. The characters are likable and the story leaves behind a good feeling.