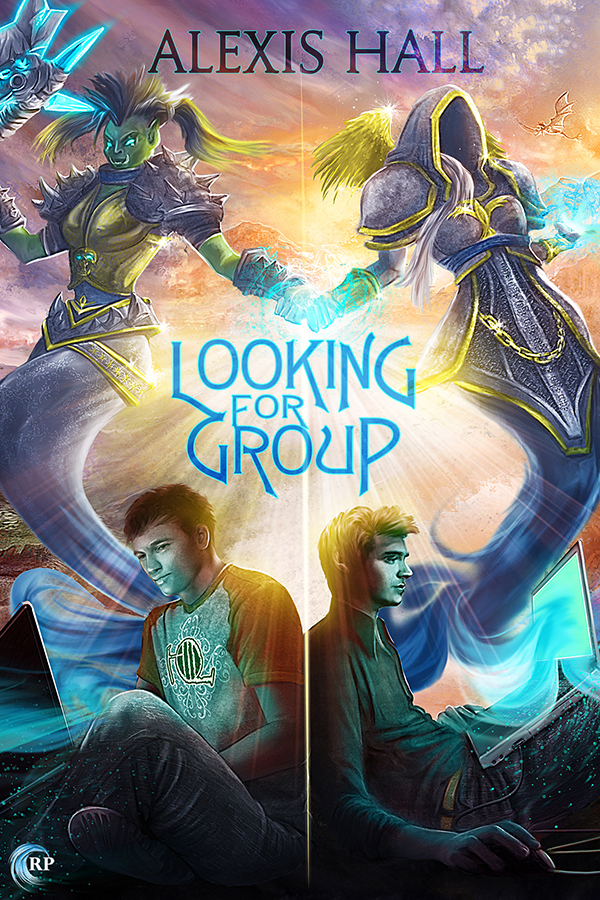 About Looking for Group

So, yeah, I play Heroes of Legend, y’know, the MMO. I’m not like obsessed or addicted or anything. It’s just a game. Anyway, there was this girl in my guild who I really liked because she was funny and nerdy and a great healer. Of course, my mates thought it was hilarious I was into someone I’d met online. And they thought it was even more hilarious when she turned out to be a boy IRL. But the joke’s on them because I still really like him.

And now that we’re together, it’s going pretty well. Except sometimes I think Kit—that’s his name, sorry I didn’t mention that—spends way too much time in HoL.  I know he has friends in the guild, but he has me now, and my friends, and everyone knows people you meet online aren’t real. I mean. Not Kit. Kit's real. Obviously.

Oh, I’m Drew, by the way. This is sort of my story. About how I messed up some stuff and figured out some stuff. And fell in love and stuff.

Alexis Hall was born in the early 1980s and still thinks the 21st century is the future. To this day, he feels cheated that he lived through a fin de siècle but inexplicably failed to drink a single glass of absinthe, dance with a single courtesan, or stay in a single garret.

He did the Oxbridge thing sometime in the 2000s and failed to learn anything of substance. He has had many jobs, including ice cream maker, fortune teller, lab technician, and professional gambler. He was fired from most of them.

He can neither cook nor sing, but he can handle a 17th century smallsword, punts from the proper end, and knows how to hotwire a car.

To celebrate the release of Looking for Group, one lucky winner will receive their choice of 3 ebooks from Alexis Hall’s backlist. Leave a comment with your contact info to enter the contest. Entries close at midnight, Eastern time, on September 3, 2016. Contest is NOT restricted to U.S. entries. Thanks for following the tour, and don’t forget to leave your contact info!

Looking for Group by Alexis Hall

A big part of this story is activities and conversation happening inside a game. It’s going to hit home more for someone who is a gamer. Since I’m not, I wasn’t fully able to understand and appreciate some parts, but it actually broadened my mind to a whole new world. I will never look at online gaming the same again.
Looking for Group is very sweet. I recommend it for teens and adults. The characters are everyday people that most can identify with at least somewhat. The storyline is full of empathy for others, faith in being the real you, knowledge that exact definitions of your sexuality aren’t necessary and examples in online friendships can be just as important as face to face relationships. For some, the gaming jargon will be too much to get passed so this won’t be a book everyone will appreciate. Go into it with an open mind, and you will see it’s a beautiful look at life and learning from one young man’s point of view.