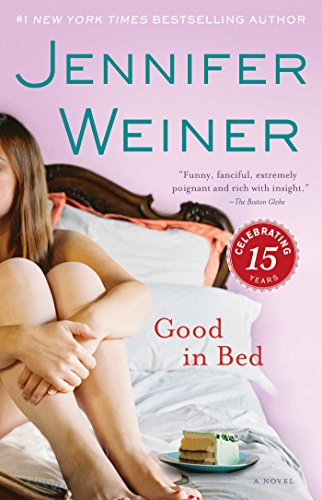 For twenty-eight years, things have been tripping along nicely for Cannie Shapiro. Sure, her mother has come charging out of the closet, and her father has long since dropped out of her world. But she loves her friends, her rat terrier, Nifkin, and her job as pop culture reporter for The Philadelphia Examiner. She's even made a tenuous peace with her plus-size body.
But the day she opens up a national women's magazine and sees the words "Loving a Larger Woman" above her ex-boyfriend's byline, Cannie is plunged into misery...and the most amazing year of her life. From Philadelphia to Hollywood and back home again, she charts a new course for herself: mourning her losses, facing her past, and figuring out who she is and who she can become.
https://www.goodreads.com/book/show/14748.Good_in_Bed
http://www.jenniferweiner.com/good-in-bed 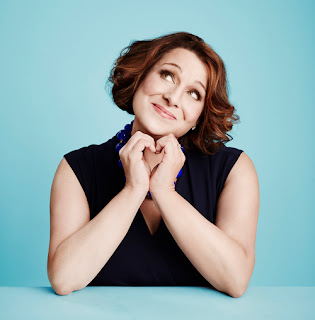 A #1 New York Times bestselling author, Jennifer Weiner’s books have spent over five years on the New York Times bestseller list with over 11 million copies in print in 36 countries.
She is the author of the novels Good in Bed (2001); In Her Shoes(2002), which was turned into a major motion picture starring Cameron Diaz, Toni Collette and Shirley MacLaine; Little Earthquakes (2004); Goodnight Nobody (2005); the short story collection The Guy Not Taken (2006); Certain Girls (2008); Best Friends Forever (2009); Fly Away Home (2010); Then Came You(2011); The Next Best Thing (2012); All Fall Down (2014) and Who Do You Love (2015). Her debut middle-grade book, THE LITTLEST BIGFOOT, will be published in September of 2016. Her first nonfiction collection, HUNGRY HEART, will appear in October of 2016.
Jennifer Weiner grew up in Connecticut and graduated summa cum laude with a degree in English literature from Princeton University in 1991. She worked as a newspaper reporter in central Pennsylvania, Kentucky, and Philadelphia, where she was a feature writer and columnist for The Philadelphia Inquirer. Now a contributing opinion writer for The New York Times Op-Ed and Sunday Review, Weiner’s essays – “Mean Girls in the Retirement Home” and “Another Thing to Hate About Ourselves” – rose to the top of the “most emailed” lists and have been reprinted in newspapers and media outlets across the world.
With over 128,000 fans on Facebook and 131,000 followers on Twitter, Weiner appeared on Time magazine’s list of “140 Best Twitter Feeds.” The magazine hailed her “must-read” live “Bachelor” tweets, noting that “rarely has there been such an ideal pairing of material and writer.” Forbes magazine put her on their list of “25 Working Moms to Follow on Twitter," writing "tune in for hilarious shards of brilliance." Entertainment Weekly named her as part of its "brain trust" for social media coverage of the 2016 election. writing "the best-selling novelist comments on the race with the same wit she brings to live-tweeting 'The Bachelor."
A 2014 New Yorker profile called Jen an “unlikely feminist enforcer” and celebrated her “lively public discussion about the reception and consumption of fiction written by women.”
In 2015, Slate praised Jen's "power-tweeting, Bachelor-watching feminist brand" and her mastery of the "haterbrag," "a bit of social media sleight-of-hand that turns an insult into an asset."
Jen uses her social media platform to encourage women's voices, self-esteem, and body positivity. In the summer of 2016, she posted a picture of herself in a bathing suit with the #weartheswimsuit hashtag, encouraging women of all ages and sizes to put on their bathing suits and get in the water. The movement, which was covered in media outlets including PopSugar, Time, Kveller, "The Today Show" and "Good Morning America," encouraged hundreds of women to shuck their cover-ups, skip the heat rash, get in the water and post shots of themselves in their swimsuits.
Jennifer has appeared on many national television programs, including The Today Show, Good Morning America, CBS This Morning, and CBS Sunday Morning, as well as #RichkidsofBeverlyHills and, as herself, on Younger. She did a series of pop culture videos for People.com, which will resume in of 2017, with the new season of "The Bachelor." Her frank, funny Facebook Live videos, on topics from the Taylor Swift/Kim Kardashian feud to gold-medal-winning shot-putter Michelle Carter's lack of endorsement deals, have been viewed tens of thousands of times and have made her page a destination for fans of sharp, witty takes on the world.
Her work has been published in dozens of newspapers and magazines, including Seventeen, Redbook, Glamour, Cosmopolitan, Elle, Allure, Ladies Home Journal, Time and Good Housekeeping. Jennifer can be found on Facebook, on Twitter, on Instagram and, in real life, Philadelphia, where she lives with her family.

Good in Bed by Jennifer Weiner

Cannie has a great personality. I love reading the words that come out of her mouth, the witty come backs and the down-to-earth delivery. She's a real people person. She's full-figured but doesn't let it slow her down. On the outside she is confident and full of life, but she does feel the barbs of plus-sized life on the inside. I like her realness.
I adored this story. It made me laugh and tear up, and it touched me deeply. It covers so many issues like weight, marriage, pregnancy, depression, parent-child relationships, gay family members, break ups, jobs and just a little of everything in a woman's life these days. The feeling is often light and occasionally heavy. It's inspiring, entertaining and delivered with a special oomph that's missing from some books. Good in Bed is a must read.