From New York Times Bestselling author Kristen Ashley, comes ROCK CHICK REAWAKENING, the long awaited story of Daisy and Marcus, brought to you by 1,001 Dark Nights! Be sure you grab your copy today!

“You, thinkin’ I’d have a problem with you bein’ Marcus Sloan,” I expanded.
“Do you know who I am?”
“Nope.” I shrugged. “Don’t care either. Though, that’s to say ‘nope’ don’t mean that I don’t know. I just don’t really know. I still don’t care. And that’s not why I don’t wanna have dinner with you.”
“I’m still not understanding.”
“Honey bunch, I’m a stripper.”
“Yes. And?”
I shut up.
Dear God, he thought I thought I was better than him.
No.
He thought I thought I had reason to think I was better than him.
“I don’t judge,” I said quietly. “Life’s life and a person’s gotta do what they feel they gotta do to get along in it.”
“This is correct.”
“So I don’t care what you do or who you are.”
“And this delights me.”
My heart started racing because it did. It delighted him.
And I knew this because his eyes were again twinkling.
“Men are a**holes,” I shared.
“Some of them are, yes,” he somewhat agreed.
“Not met many who aren’t. My count, all my life, that number equals two.”
Those twinkling eyes stopped twinkling in order to flash.
“Just two?”
“Yup. Two,” I confirmed.
“Although I find that knowledge upsetting, I’ll share I’d like to make that three,” he told me something I already (mostly) got.

A Message from Kristen:

I’m beside myself with glee that this prequel to my Rock Chick series has been unleashed! There was some time when I never thought I’d write it. When I couldn’t be in that terrible place with Daisy. But I’m oh-so glad that she called to me, demanding her story be told so she could give it to me and now I can give it to you! I loved every moment spent with Daisy and Marcus. And I hope you do too! 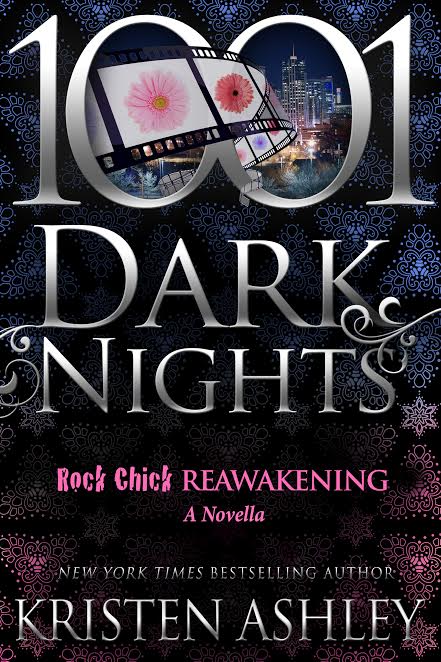 From New York Times bestselling author, Kristen Ashley, comes the long-awaited story of Daisy and Marcus, Rock Chick Reawakening. A prequel to Kristen’s Rock Chick series, Rock Chick Reawakening shares the tale of the devastating event that nearly broke Daisy, an event that set Marcus Sloan—one of Denver’s most respected businessmen and one of the Denver underground’s most feared crime bosses—into finally making his move to win the heart of the woman who stole his.

“This novella is like the key to all the locked doors in this series.”

“We inhaled Marcus and Daisy’s story, how could we not. It was everything to us and we cannot thank Kristen Ashley enough for writing it, in her much loved unique manner. The queen of epilogues struck once more and we smiled through copious tears of happiness, our hearts feeling full and complete. Whilst sad that it’s over we just can’t feel anything but happiness and love right now. It was Aces! Rock on…and be prepared to be swept of off your feet.”

“There is something about them [Ashley’s books] that I find crackalicious.”

“I felt all of the rushes, the adrenaline surges, the anger spikes… my heart pumping in fury. My eyes tearing up when my heart (I mean… her heart) would break.”

About Kristen Ashley:
Kristen Ashley was born in Gary, Indiana, USA and nearly killed her mother and herself making it into the world, seeing as she had the umbilical cord wrapped around her neck (already attempting to accessorize and she hadn't taken her first breath!). Her mother said they took Kristen away, put her Mom back in her room, her mother looked out the window, and Gary was on fire (Dr. King had been assassinated four days before). Kristen's Mom remembered thinking it was the end of the world. Quite the dramatic beginning.


Kristen grew up in Brownsburg, Indiana and has lived in Denver, Colorado and the West Country of England. Thus, she's blessed to have friends and family around the globe. Her family was (is) loopy (to say the least) but loopy is good when you want to write. They all lived together on a very small farm in a small farm town in the heartland. She grew up with Glenn Miller, The Everly Brothers, REO Speedwagon and Whitesnake (and the wardrobes that matched).


Needless to say, growing up in a house full of music, clothes and love was a good way to grow up.


And as she keeps growing, it keeps getting better.

Rock Chick Reawakening by Kristen Ashley
My rating: 4 of 5 stars

This book gives us the backstory for Daisy and Marcus. Both are very strong and have overcome much in their lives. Daisy is so sweet and light for all the pain she's had. It makes me appreciate her uniqueness even more after witnessing her struggles. Marcus is amazing. His actions are perfect and mature in every situation. He's secure in himself and respectful of Daisy in every way. We get to witness how they came to be a couple. They seem so different; yet, they're perfect for one another.
Seeing bits of much beloved characters from other books is a treat of course. We get scenes before we ever knew them in the previous stories, before they're more settled. I adore the Rock Chick series. I thought it was over so I'm super happy to get more. RCR is more serious than some of the other books and shorter, but it gives the reader that great vibe of being back in that world. I've missed it. Reading this novella is a must for all RC fans.