The Deal by Elle Kennedy Review 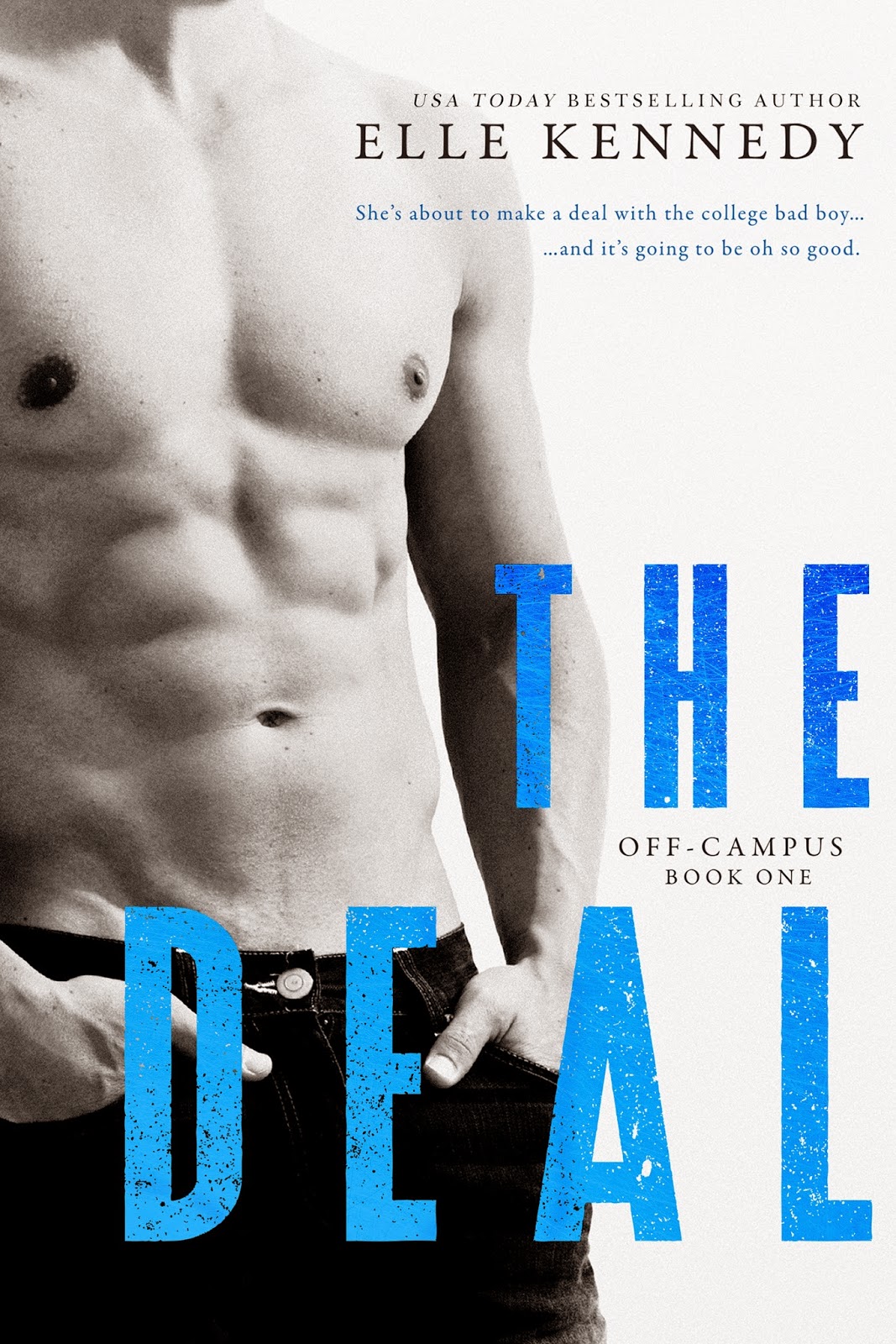 
Hannah Wells has finally found someone who turns her on. But while she might be confident in every other area of her life, she’s carting around a full set of baggage when it comes to sex and seduction. If she wants to get her crush’s attention, she’ll have to step out of her comfort zone and make him take notice…even if it means tutoring the annoying, childish, cocky captain of the hockey team in exchange for a pretend date.

…and it’s going to be oh so good

All Garrett Graham has ever wanted is to play professional hockey after graduation, but his plummeting GPA is threatening everything he’s worked so hard for. If helping a sarcastic brunette make another guy jealous will help him secure his position on the team, he’s all for it. But when one unexpected kiss leads to the wildest sex of both their lives, it doesn’t take long for Garrett to realize that pretend isn’t going to cut it. Now he just has to convince Hannah that the man she wants looks a lot like him.

One of a thousand favorite lines:


Yes, Hannah and I are friends. In fact, she’s the only female friend I’ve ever had. And yes, I want to keep being Hannah’s friend. But…I also want to sleep with her.​

"Hannah and Garrett are funny, relatable, and their chemistry on the page is palpable enough to linger off of it. The Deal reminds me of all the reasons I love romance. Two capable, yet flawed people realize that living without the other is worse than anything else life can throw at them. I highly recommend it to fans of Easy by Tammara Webber or The Hook Up by Kristen Callihan. It'll make you laugh, maybe even tear up, but most of all leave you with that warm good book feeling at the end."


​​
Elle Kennedy engages your senses from the very first sentence! Both deliciously steamy and heart-achingly tender, the Deal is an absolute winner!

​EXCERPT​
Thirty minutes before my shift ends, I find Garrett Graham in one of my booths.


Does this guy ever give up?

I have no desire to go over there and serve him, but I don’t have much of a choice. Lisa,

the other waitress on duty, is busy tending to a group of faculty members at a table across the room, and my boss Della is behind the baby-blue Formica counter dishing out slices of pecan pie to three freshman girls sitting on the tall swivel stools.

I set my jaw and march up to Garrett, making my displeasure obvious as I meet his
twinkling gray eyes. He runs a hand through his cropped dark hair and flashes a lopsided grin.

“Yeah, fancy,” I mutter, yanking my order pad out of my apron pocket. “What can I get

“Sorry, that’s not on the menu.” I smile sweetly. “We serve really good pecan pie,

“You know what I did last night?” he says without acknowledging the sarcasm.

“Yep. You were text stalking me.”

He rolls his eyes. “Before that, I mean.”

with the girls’ hockey team. No, wait, they’re probably not ditzy enough for you. I stick with my original guess—cheerleader.”

“Sorority sister, actually,” he says smugly. “But I’m talking about what I did before that.”

He raises one dark eyebrow. “But I’m very intrigued by your interest in my sex life. I can give you details about that another time if you want.”

“Another time,” he echoes in a dismissive tone, folding his hands on the blue-and-white-
checkered tablecloth.

He’s got big hands with long fingers, short nails, and knuckles that are slightly red and
cracked. I wonder if he’s been in a fight recently, but then I realize the busted-up knuckles are probably a hockey player thing.

“I was at study group yesterday,” he informs me. “There were eight other people there,
and you know what the highest mark in the group was?” He blurts out the answer before I can hazard a guess. “C-plus. And our combined average was a D. How am I supposed to pass this makeup if I’m studying with people who are as dumb as I am? I need you, Wellsy.”

Wellsy? Is that a nickname? And how on earth does he know that my last name is Wells?

Garrett notices my surprised look and cocks his brows again. “I learned a lot about you in study group. Got your number, your full name, even found out where you work.”

“Congratulations, you really are a stalker.”

“Nope, just thorough. I like to know what I’m up against.”

“Jesus Harold Christ! I’m not tutoring you, okay? Go bug somebody else.” I point at the
menu in front of him. “Are you ordering? Because if not, then please go away and let me do my job in peace.”

“Jesus Harold Christ?” Garrett snickers before picking up the laminated menu and giving it a cursory glance. “I’ll have a turkey club.” He sets the menu down, then reaches for it again.

“And a bacon double cheeseburger. Just the burger, no fries. Actually, I changed my mind—yes to the fries. Oh, and a side order of onion rings.”

My jaw almost hits the floor. “You’re seriously going to eat all that?”

Boy? Nuh-uh. I’m only noticing it now—probably because I’ve been too distracted by
how insufferable he is—but Garrett Graham is all man. There’s nothing boyish about him, not his chiseled good looks or his tall frame or that ripped chest of his, which suddenly flashes to mind as I remember the picture he sent me.

“I’ll also take a slice of that pecan pie and a Dr. Pepper to drink. Oh, and some tutoring.”

“Not on the menu,” I say cheerfully. “But the rest is coming right up.”

Before he can argue, I abandon his booth and head to the back counter to place his order with Julio, our night cook. A nanosecond later, Lisa rushes over and addresses me in a hushed

Lisa looks outraged. “What is wrong with you? Why aren’t you freaking out right now?

Garrett Graham is sitting in your booth. He talked to you.”

“Holy shit, he did? I mean, his lips were moving, but I didn’t realize he was talking.”

I roll my eyes and walk over to the drink station to pour Garrett’s drink. I don’t look his
way, but I can feel those smoky gray eyes following my every movement. He’s probably sending


​
elepathic orders for me to tutor him. Well, too bad for him. There’s no way I’m wasting the little spare time I have on a college hockey player who thinks he’s a rock star.


Lisa trails after me, oblivious to my sarcasm and still gushing about Graham. “He’s so


gorgeous. Like unbelievably gorgeous.” Her voice lowers to a whisper. “And I hear he’s

I snort. “He probably started that rumor himself.”

“No, Samantha Richardson told me. She hooked up with him last year at the Theta
kegger. Said it was the best sex of her life.”

I have no response, because I couldn’t care less about the sex life of some girl I don’t
even know. Instead, I shrug and hold out the Dr. Pepper. “You know what? Why don’t you take his booth?”

The way Lisa gasps, you’d think I just handed her a check for five million dollars. “Are
you sure?”

“Oh my God.” She takes a step forward as if she’s going to hug me, but then her gaze
darts to Garrett and she appears to have second thoughts about broadcasting her terribly unwarranted joy. “I owe you so big for this, Han.”

I want to tell her that she’s actually doing me the favor, but she’s already dashing toward
the booth to wait on her prince. I watch in amusement as Garrett’s expression clouds over at

Lisa’s approach. He picks up the glass she sets in front of him, then meets my gaze and slants his

As if to say, you’re not getting rid of me that easily.

The Deal by Elle Kennedy

This is one of those really sweet and saucy new adult books that makes us ladies swoon. It completely met that bar, but I was surprised by some of the deep subject matter too. While it has all those romance and young love in college vibes, it also is a story of overcoming trauma.

Garrett is the big man on campus, but I wouldn't call him typical. He's maybe a little full of himself, but the most genuine guy ever. Hannah is a little different also. She's focused without being a snob and reserved while still being fun. Both characters behaved pretty maturely which I super appreciate, no over drama or cheating. Both are good people with demons in their pasts, and when they hook up sparks fly.

Sometimes people sneak up on you and suddenly you don't know how you ever lived without them. How you went about your day and hung out with your friends and fucked other people without having this one important person in your life.

I will certainly read the next book in the series. I would like to know more about this group of friends. This story left me feeling happy and made me smile while reading.