The Contradiction of Solitude by A. Meredith Walters Review 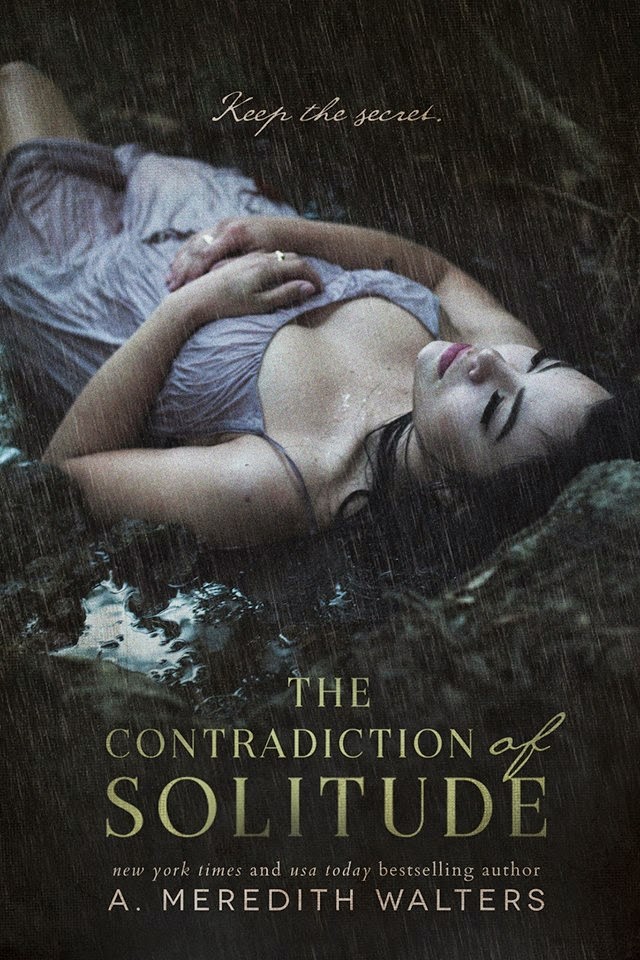 You may notice me, but you will never know me.
I prefer it that way.
I am the daughter of a monster.
Born from blood and lies.
Dead before I have truly lived.
But Elian tells me that I'm different.
He tells me that I'm beautiful.
That I'm an enigma wrapped in irresistibly complicated skin.
Elian says that he loves me.
These words terrify me.
I can't trust love.
Or hope.
Or truth.
Because I fear the beast inside.
It threatens to drown Elian and his sweet, unconditional love.
It's a beast that will destroy everything.
*This is a psychological thriller and very different than my previous books*

The New York Times and USA Today bestselling author of Contemporary and Paranormal romance including The Find You in the Dark and Bad Rep series as well as the upcoming stand alone romance, Reclaiming the Sand, and a dark new adult series for Gallery Books.

A. Meredith spent ten years as a counselor for at risk teens and children. First working at a Domestic Violence/Sexual Assault program and then later a program for children with severe emotional and mental health issues. Her former clients and their stories continue to influence every aspect of her writing.

When not writing (or being tortured with all manner of beauty products at the hand of her very imaginative and extremely girly daughter), she is eating chocolate, watching reality television that could rot your brain and reading a smutty novel or two.

A. Meredith is represented by Michelle Johnson with the Inklings Literary Agency.

The Contradiction of Solitude by A. Meredith Walters

This book is not a romance at all. So when I say it has dark themes, I don't mean sexually. This novel deals more with the darkness of a soul. Before reading it, I was told these facts so I definitely want to convey the point. This story is not a love story.

I can't give many details of the actual plot without ruining it so I'm sorry if my points seem vague. I love psychology. So many aspects of it are present here. The book is a psychological thriller. Psychology is used on the reader, and some of the characters suffer from psychological disorders. Because of the fact that the story involves a serial killer, bloody murder scenes do play a part. The narrative switches between two characters points of view. It is mostly told in present tense with some flashbacks.

Much of the first is build up. I think the author really wants to put the reader in a certain state of mind. There's so much introspection from the characters that I started to feel like the storyline was just spinning it's wheels. I was ready to move to the action. That is the only fault that I have, and it's just a personal issue. If the story wouldn't have moved at a slower pace during some parts, it may have given the rest less impact.

As for when things start happening, I was super into it. Whether you are surprised by the direction the story takes or not, you will still feel the effects. Excellent storytelling, marvelous. This book definitely put the fear into me. I think I'll never leave my house again. It's too dangerous out there in the world.

If you're looking for a feel good read, this probably isn't for you. If you want to try something different to get your blood pumping, something quite chilling and twisted, you may have just found it.