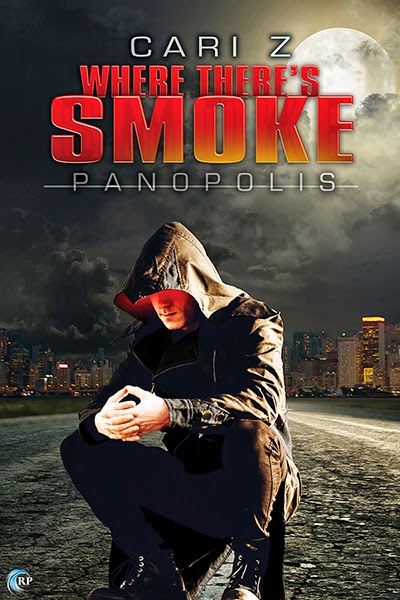 Panopolis is a rough place to be an average Joe. I came here looking for adventure and excitement, but nobody cares about one more normal guy in a city filled with super-powered heroes. The closest I’ve come to glory is working in a bank that villains often rob.

But then I maybe accidentally-on-purpose helped a villain escape the hero who was trying to save the day. Imagine my shock when, a week later, that villain asked me out for coffee. One date turned into more, and now I’m head over heels in love with Raul.

Falling in love with the guy dubbed the Mad Bombardier isn’t without its downsides, though. I’ve had to deal with near-death encounters with other villains, awkwardly flirtatious heroes who won’t take no for an answer, and a lover I’m not sure I can trust. It’s getting to the point where I know I’ll have to make a choice: side with the heroes, or stand fast by my villain.

Either way, I think my days as a normal guy are over.

Cari Z was a bookworm as a child and remains one to this day. In an effort to combat her antisocial reading behavior, she did all sorts of crazy things, from competitive gymnastics to alligator wresting (who even knew that was legal!) to finally joining the Peace Corps, which promptly sent her and her husband to the wilds of West Africa, stuck them in a hut, and said, "See ya!" She also started writing in earnest then, because when you have no television, no car and nothing to read other than a French translation of Twilight, you find ways of entertaining yourself. She’s been back in Colorado for a while now, but stuck with the writing.

Cari posts a free weekly serial on her blog at carizerotica.blogspot.com. Come read, come say hi, or check out her other works at cari-z.net.

Every comment on this blog tour enters you in a drawing for a paperback copy of Rules To Live By. Entries close at midnight, Eastern time, on May 2. Contest is NOT restricted to U.S. entries. Don't forget to add your email so we can contact you if you win!

Where There's Smoke by Cari Z.

This story is about villains and heroes. It does things a little differently than many superhero tales. The main character is a human man in love with a villain. There are a lot of grey areas. Instead of the standard supervillain most of us are used to seeing, we get a guy who is not good but still has morals. He isn't out with some big ruthless plan for world domination, but he isn't using his powers to help others either. In fact, the lines are very blurred throughout on which characters would be considered righteous or evil.

This is the first book or comic of this type that I have read where the leads are gay. Definitely a welcome change for me. It contains dark comedy which kind of pokes fun of stereotypes. Some details of gore are present. Romance and love are a heavy point also. I easily dug into the plot, and I'm looking forward to the rest of the series.