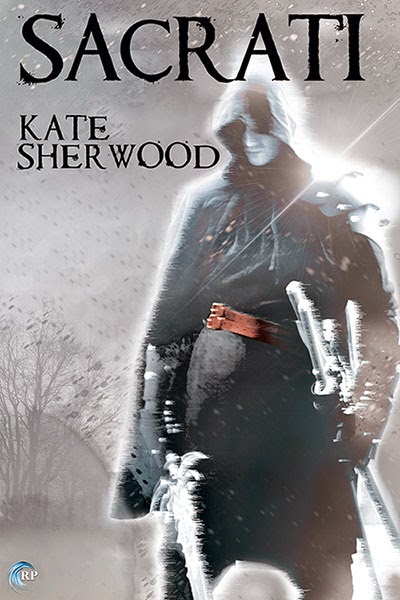 As an elite Sacrati fighter in the mighty Torian military, Theos is blessed with a city full of women who want to bear his children, and a barracks full of men proud to fight at his side and share his bed. He has everything he needs—until he captures Finnvid on a raid.

Finnvid is on a secret mission to prevent the Torian invasion of his homeland Elkat. Being enslaved by Torian soldiers wasn’t in his plans. Neither is his horrified fascination with the casual promiscuity of the Sacrati warriors. Men should not lie with other men—and he should not be so intrigued when they do. He definitely should not be most intrigued by the leader of the soldiers who captured him and plan to invade his home.

For Theos, everything would have been easier if the infuriating, lying, bewildering Elkati had never come into his life, but he can’t stay away. When betrayal and treachery threaten both their nations, they must work together to stop a war that could destroy their homes forever—even as they begin to question everything they’re fighting for.

Kate Sherwood started writing about the same time she got back on a horse after almost twenty years away from riding. She’d like to think she was too young for it to be a midlife crisis, but apparently she was ready for some changes!

Kate grew up near Toronto, Ontario (Canada) and went to school in Montreal, then Vancouver. But for the last decade or so she’s been a country girl. Sure, she misses some of the conveniences of the city, but living close to nature makes up for those lacks. She’s living in Ontario’s “cottage country”--other people save up their time and come to spend their vacations in her neighborhood, but she gets to live there all year round!

Since her first book was published in 2010, she’s kept herself busy with novels, novellas, and short stories in almost all the sub-genres of m/m romance. Contemporary, suspense, scifi or fantasy--the settings are just the backdrop for her characters to answer the important questions. How much can they share, and what do they need to keep? Can they bring themselves to trust someone, after being disappointed so many times? Are they brave enough to take a chance on love?

Kate’s books balance drama with humor, angst with optimism. They feature strong, damaged men who fight themselves harder than they fight anyone else. And, wherever possible, there are animals: horses, dogs, cats ferrets, squirrels… sometimes it’s easier to bond with a non-human, and most of Kate’s men need all the help they can get.

After five years of writing, Kate is still learning, still stretching herself, and still enjoying what she does. She’s looking forward to sharing a lot more stories in the future.


Every comment on this blog tour enters you in a draw for a $15 Riptide gift card. Entries close at midnight, Eastern time, on April 11. Contest is NOT restricted to U.S. entries. Don’t forget to add your email so we can contact you if you win!

Sacrati has a historical feel, but it's also like an alternate reality type read. It's not paranormal or fantasy by my definition. All things that happen are capable of occurring within our real world past, but the Torian society is completely different from anything that has ever happened as far as I know.

Finnvid lives in a more traditional kingdom. He is high-born, younger brother to the king, son of the queen mother. He is expected to be refined, learnéd and above the common folk. He is also required to marry a woman of the same standing.

Theos is from a warring people. He is an elite soldier. His way of life is totally different. Academics have no place, and strength is everything. The women and children life in the city. The men live around the city. Most of the men have sex with each other and travel into the city during certain times to impregnate the women. Everyone is considered equal for the most part in this system, but no one mates for life or marries.

This book has a lot of positives. The storyline is great in my opinion. The politics and social aspects are very well thought out and detailed. I really got into picking sides and choosing alliances. I thought the set up was completely original. The descriptions of how the soldiers lived in the wild was very interesting also.

I did have an issue with the romantic interest. I liked both of the male leads and really pulled for them. Their relationship did not go exactly how I thought it would. I had mixed feelings especially toward the end. It wasn't believable for me.

I enjoyed this novel and plan to check out more from this author. I recommend it to readers who like war plotting and strategy stories.