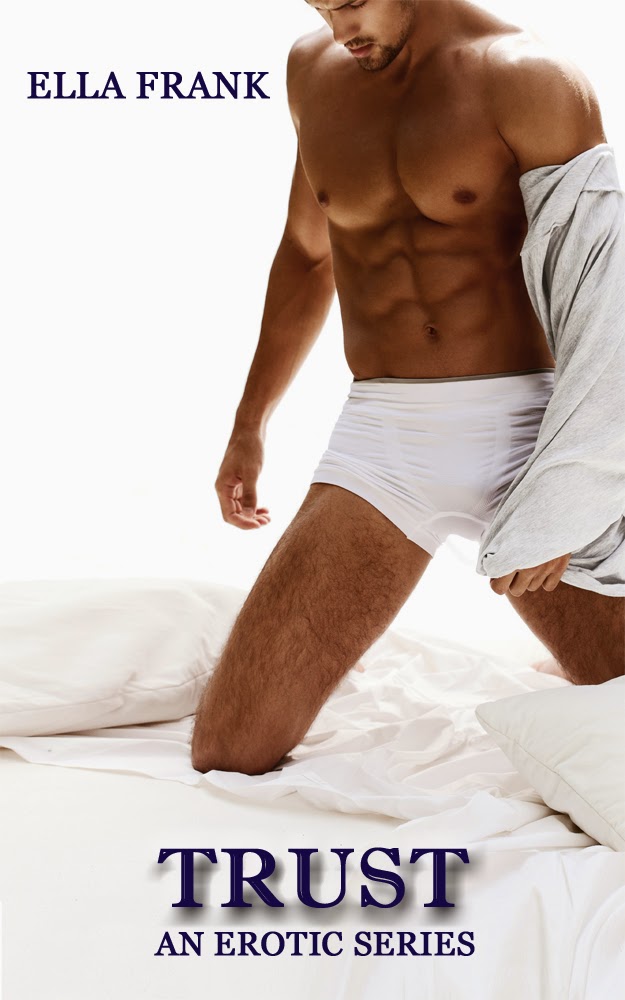 TRUST – verb: to believe in the reliability, truth, or strength of another.

Up until now, Logan Mitchell has never had much of a reason to trust anyone.
Having struggled with a self-identity crisis throughout college, he’s spent the years since then creating a sophisticated facade to present to the world.
It’s an armor he thought was impenetrable—until he met Tate Morrison.
The gorgeous, headstrong bartender he’d sat across from only months ago has taken a tight hold of his heart, and Logan is discovering that it’s time to let go.
It’s time to let someone inside.

After years of placing his dreams on hold for his family, Tate has finally chosen to do what makes him happy and follow his heart.
The one thing he never would’ve imagined was that it would lead him into the arms of a man—and not just any man—the striking, never-takes-no-for-an-answer Logan Mitchell.
Tate has fallen hard, and as his world is turned on its axis and they move forward together, he finds his life becoming more entwined with the confident, successful lawyer.

Even though neither man expected the other, it’s time to trust in their relationship—but not everything comes so easily… 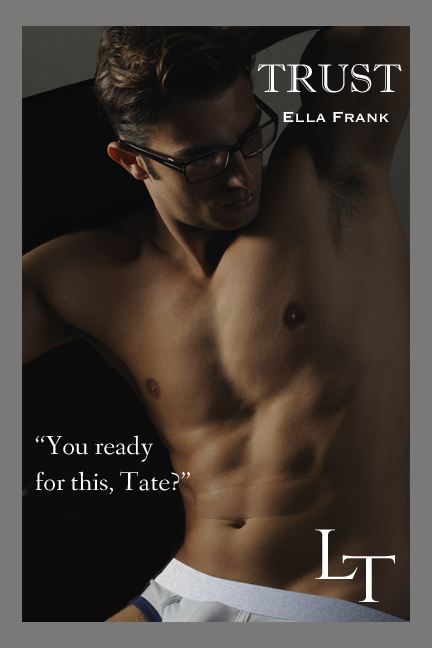 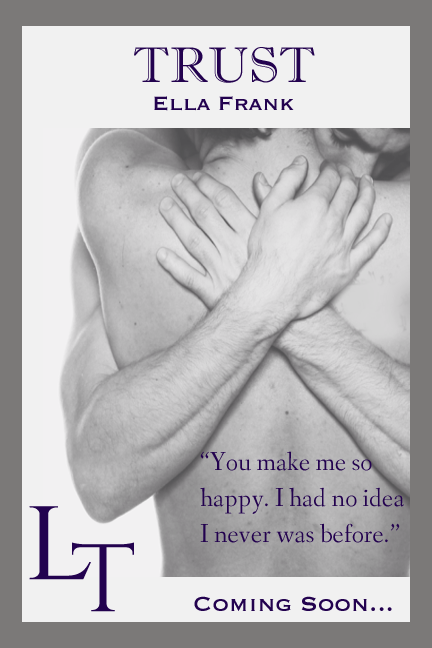 “What’s wrong with my hair? Are you saying I need to cut it?”
“No, I’m fucking not,” Logan said as he fingered the curls by Tate’s ear. “And you know it.”
“What would you do if I did shave my head?”
“Kill you? And likely get away with it since I have connections to a very reputable law firm.”
Tate chuckled and shoved Logan until he was on his back beside him. “Be serious.”
Logan turned his head on the pillow and ran his eyes over Tate’s full head of hair. Then he returned his gaze to the eyes watching him. “I would quite possibly cry. For days.”
“Over my hair? It does grow back, you know.”
“Yeah, but not for months,” he grumbled. “Can you please stop talking so calmly about this? You’re making me nervous.”
Tate shifted until his long, lean body was stretched out above him, and Logan widened his legs to allow him to settle in between.
“Don’t worry,” Tate assured him as he lowered his head to kiss the corner of his mouth. He then moved those teasing lips to Logan’s ear and whispered, “I like your hands in it too much to cut it off.”
Logan threaded his fingers through the thick waves and asked, “Like this?”
With a groan, Tate rocked his hips against him, and Logan twisted his fingers tighter.
“Exactly like that.”
“Good,” he said as he wound his legs around Tate’s. “Because this way, I can have a tight hold on you when you’re trying to distract me. I’m onto you, Mr. Morrison. Don’t try to use your body against me.”
He almost lost his willpower when Tate, the cocky fucker, placed his hands on either side of his head and rubbed their erections together.
“You don’t want me to use my body on you?”
“Fuck you,” Logan said, knowing full well that, if he didn’t change the subject or get Tate the hell off him, he was going to roll him over and cease talking altogether.
Usually he’d love nothing more, but right now, he wanted to know why Tate had reacted so strongly to his question from last night—well, early morning.
“We need to talk.” 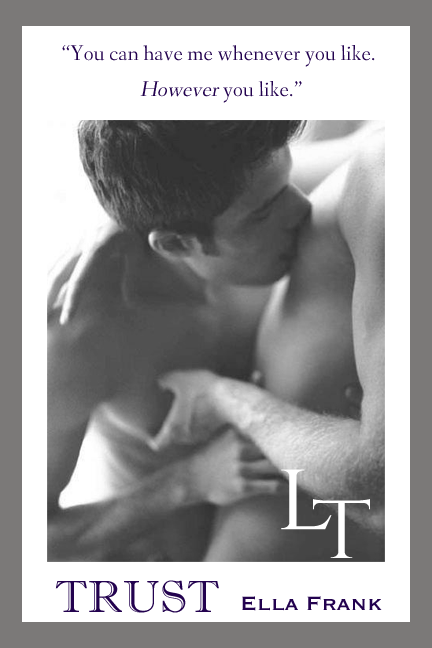 
Here is the universal amazon link for all countries - myBook.to/Trust 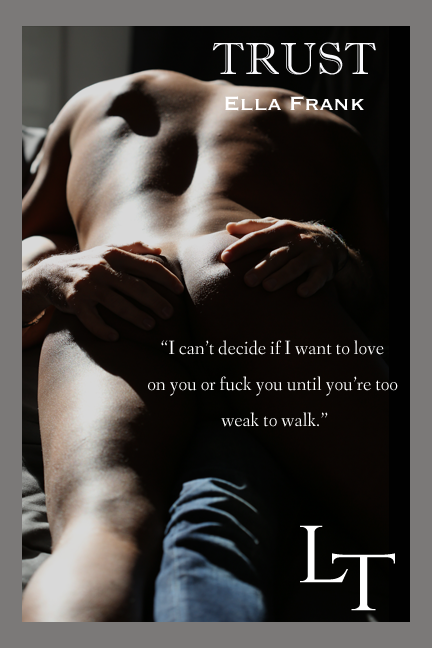 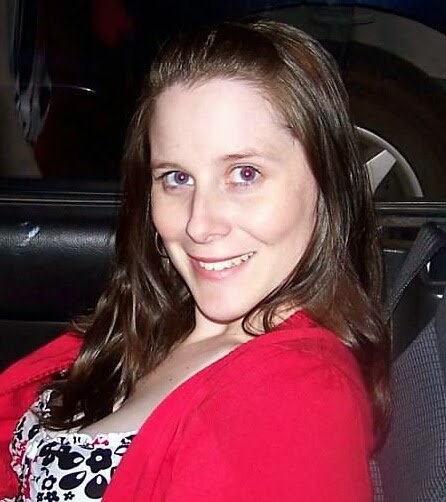 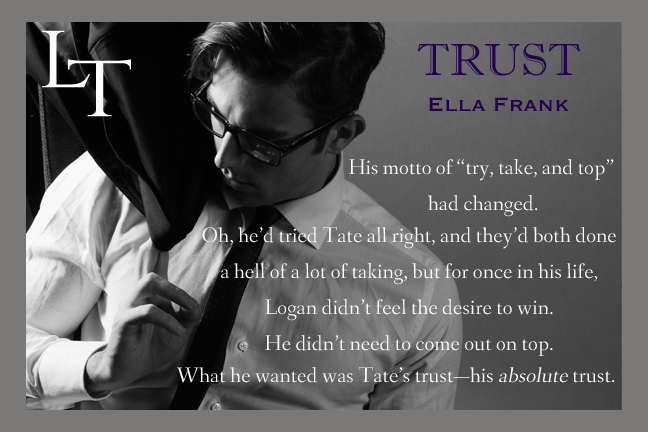 Logan and Tate have gone through many changes from when we first met them. They've moved on to a great place in their relationship. Being a reader who has followed their journey, I couldn't wait to have more, but I was sad to know this was the end of the series. Watching these men grow into who they are suppose to be with each other has been wonderful.

Even though they are together and exclusive, Logan and Tate have not completely sorted out their happily ever after. What's the end game? Trust answers all of that. Also, as shown with the last installment, they have many issues—family members, exes and just life problems that arise. This book does have surprises in all of those categories.

I always enjoy catching up with the cast of the Exquisite series. They all had bits. I'm hoping Ella will at some point in the future allow the Temptation series to cross over into another also. hint, hint ;)

I just want to say thank you to Ella. This series will always have a special place in my heart. Try was the first M/M novel I ever read. It opened up a whole new world to me. Now I read as much M/M as anything else. Logan and Tate will always be my first, and their series will always be one of the great romances of the literary world.