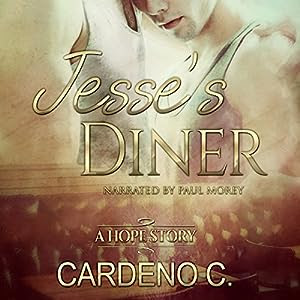 Two men with a shared history and a mutual attraction must be honest with themselves and each other so both their dreams come true.
Quiet, unassuming Tanner Sellers spends his time running a diner in Hope, Arizona. Not particularly social, 22-year-old Tanner keeps to himself and enjoys his simple life, but he longs for someone to call his own. In his most secret fantasy, that someone is sexy Steve Faus. But Steve is his friend's father and mentor's widower and therefore off-limits.
Despite some challenges, 39-year-old Steve Faus has had a good life. He's extremely successful at work, has a great relationship with his college-age son, and lives in a wonderful town. Eighteen months after losing his partner, the one thing Steve lacks is someone to share his life with. If Steve is honest with himself, that someone is the young man he has known and cared about for years. Steve and Tanner want one another; all they need is a little push in the right direction to make both their dreams come true. 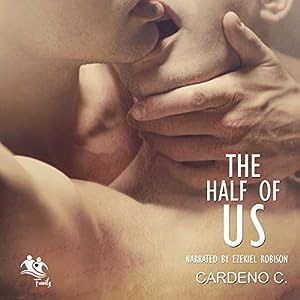 The Half of Us: Family Collection

Short-tempered, arrogant heart surgeon Jason Garcia grew up wanting a close-knit family, but believes he ruined those dreams when he broke up his marriage. The benefit of divorce is having as much random sex as he wants, and it's a benefit Jason is exploiting when he meets a sweet, shy man at a bar and convinces him to go home for a no-strings-attached night of fun.
Eight years living in Las Vegas hasn't dimmed Abe Green's optimism, earnestness, or desire to find the one. When a sexy man with lonely eyes propositions him, Abe decides to give himself a birthday present - one night of spontaneous fun with no thoughts of the future. But one night turns into two and then three, and Abe realizes his heart is involved.
For the first time, Abe feels safe enough with someone he respects and adores to let go of his inhibitions in the bedroom. If Jason can get past his own inhibitions and open his heart and his life to Abe, he might finally find the family he craves. 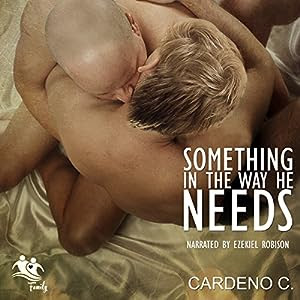 Something in the Way He Needs: Family Collection

Controlled Asher didn't expect to fall for free-spirited Daniel, but they'll find what they desperately need in one another.
Police captain Asher Penaz's staunch professionalism bleeds into his home life, down to his neatly pressed attire and Spartan apartment. He enjoys being in charge and in control, so his sudden and powerful attraction to the lighthearted, free-spirited Daniel Tover throws him for a loop. In his entire life, Daniel has never gotten what he needs, so he moves to the next place, the next job, the next attempt to find something worth staying for, always landing at the top of his game, but never feeling like he belongs.
The chemistry between Asher and Daniel sizzles, but with all that fire comes the risk of getting burned. As both men struggle to learn themselves while getting to know each other, the lines of desire and control blur. If Daniel and Asher can walk through the flames together, they might find what they desperately need. 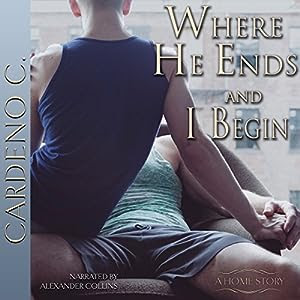 Where He Ends & I Begin: Home Collection, Book 3

Aggressive, physical, and brave, Jake Owens is a small town football hero turned big city cop who passes his time with meaningless encounters believing he can't have who he really wants: Nate Richardson, his best friend since before forever. Thoughtful, quiet, and kind, Nate is a brilliant doctor who has always known who he is and has never been able to shake his crush on loyal, courageous, straight Jake.
After a passionate night together, Nate realizes Jake isn't as straight as he assumed, but he worries that what they shared was a fluke, a result of too much closeness for too long. For Jake, the question isn't how they ended up in bed together because he has always known that Nate holds his heart; it's how he'll convince Nate that he wants and needs to stay there.

Cardeno C. - CC to friends - is a hopeless romantic who wants to add a lot of happiness and a few "awwws" into a reader's day. Writing is a nice break from real life as a corporate type and volunteer work with gay rights organizations. Cardeno's stories range from sweet to intense, contemporary to paranormal, long to short, but they always include strong relationships and walks into the happily-ever- after sunset.
Cardeno's Home, Family, and Mates series have received awards from Love Romances and More Golden Roses, Rainbow Awards, the Goodreads M/M Romance Group, and various reviewers. But even more special to CC are heartfelt reactions from readers, like, "You bring joy and love and make it part of the every day."
Website | Facebook | Twitter
Cafe Risqué ~ SharedBlog
Pintrest | Google+ | Youtube

a Rafflecopter giveaway
presented by WLKBookPromotions.com

Where He Ends and I Begin by Cardeno C.

This book is pure sweetness, awww to the max. It definitely hit the spot for the mood I was in.

Nate and Jake were destined to be together. They were raised as one big family. It's like both have a second set of parents and a brother. They aren't alike in the sense that one is a jock and the other a nerd, but they both form their life around and follow the other. The way they base their entire existence on one another makes an epic romance inevitable. They do have a few bumps to pass on the way, but this is mostly a drama free, smooth read.

If you're looking for an adorable couple who are all about their love for each other, this is the story for you.

The Half of Us by Cardeno C.

I thoroughly enjoyed reading this book. Many stories are about the meeting and trying to hook up, the excitement of it all. This volume already has that. It's about the actual settling down.

Jason tried marriage with a woman, but couldn't stay faithful. His reason for not being able to commit to the marriage is that he's gay, but in his mind, he believes that monogamy wasn't meant for him.

Jason has already lived it up, slept with more men than he can count, but after meeting Abe that lifestyle doesn't appear as glamorous as he thought it was.

This change in his feelings also opens his eyes to other areas of his life that need work. I adore the whole family aspect of this story. It has plenty of heat, but we get the sweetness and real life problems as well. And I love how he has a great relationship with his ex-wife. So often the exes are portrayed as bitches, but his ex is lovely. They're still best friends. This book has a cast of likable and relatable characters which I think is wonderful.

This is a feel good story. It has so many factors which could have caused major dramatics, but they're handled with grace. Steve is a 39 year old HIV-positive man who lost his life partner. Tanner is a socially awkward virgin who is in love with his friend's dad (Steve).

These two smoothly ease into a relationship and handle everything maturely. I'm a fan of not having manufactured drama. I love the sweetness. McFarland's Farm (book 1) was better for me, but I do recommend Jesse's Diner to someone looking for a cute, pleasant, lovable read.

Something in the Way He Needs by Cardeno C.

I really had trouble finding any sense of connection with these characters. More than anything I felt aggravation or apathy with their relationship. My recommendation is not to start with this book if you haven't read Cardeno C. before. Then again, plenty of people love this one so it may be your type of read.