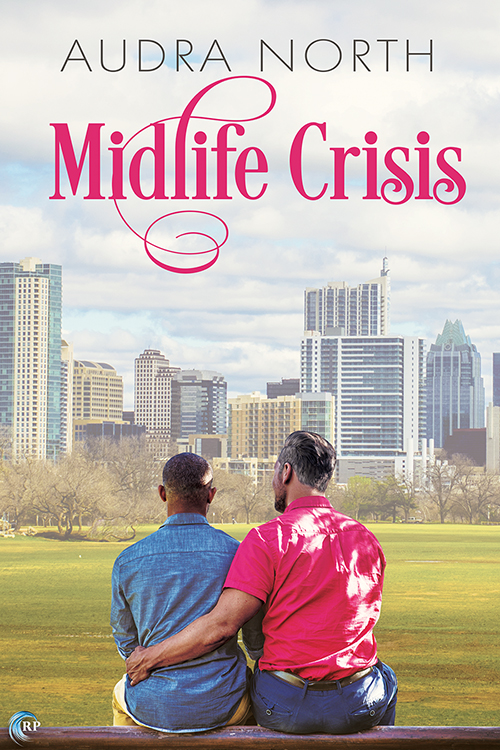 Cam McGhee grew up like any other small-town Texas farm boy: he played football, went to church every Sunday, and married his high school sweetheart. But thirty-five years after he said "I do," Cam finds himself nursing a beer in a gay bar, thinking about what might have been.

Dave Montoya is confident, self-assured, and cautiously single. But when he meets shy, uncertain, and clearly-still-not-out Cam in a coffee shop in Austin, his reservations about getting seriously involved again disappear. Cam is everything he’s looking for in a partner . . . almost, anyway.

No matter how much Dave wants him, and how good they are together, Cam can't bring himself to openly embrace the life he was meant to live. After all, when his secret finally gets out, he faces the very real possibility of losing everything that kept him going for the first fifty years of his life, just like he’s feared for so long. But with a little faith—and a lot of love—his dream of living fully, truly, as himself might finally be within reach.

Audra North is a contemporary romance author of more than twenty romances, including the Stanton Family series, the Hard Driving series, and the Pushing the Boundaries series. She is the owner and publisher of Pink Kayak Press, which focuses on the publication of diverse romance works. Winter Rain, a Pink Kayak Press anthology, won a gold medal in the 2015 Independent Publisher Awards.

Audra enjoys speaking to writing groups and at industry conferences. She is also an avid jogger and loves running marathons. She has three children and lives with her family outside of Boston.

For more about Audra, and to sign up for her newsletter, visit audranorth.com.

To celebrate the release of Midlife Crisis, one lucky winner will receive a $25 Amazon gift card! Leave a comment with your contact info to enter the contest. Entries close at midnight, Eastern time, on September 2, 2017. Contest is NOT restricted to U.S. entries. Thanks for following the tour, and don’t forget to leave your contact info!

THREE IS A WAR by Pam Godwin Release Blitz

The conclusion of the Tangled Lies series is now available!

Three means war. Three sides vying for forever.
Cole. My first love. The bad boy with the dangerous smile and passionate temper draws attention like a lit fuse on dynamite. But his dark molten eyes spark only for me.
Trace. My second chance. Over six feet of Norse god in a tailored suit, he calculates every move and seizes my hungry breaths with an iron fist.
Me. The free-spirited dancer, torn between two men with no resolution in sight. I tried leaving, staying, refusing, and surrendering. What options do I have left?
I love two men, and I do the only thing I can. I fight.

One promise. One forever.
One look and I knew Cole was mine. My dark rebel in leather. My powerhouse of passion, devastating smiles, and impulsiveness. When his job sends him overseas, he promises to return to me. A promise that’s destroyed in the most irrevocable way.
Two years later, an arrogant suit invades my heartbroken loneliness.
Clean-cut and stern, Trace is everything Cole wasn’t. At first, he’s a job that will rescue my dance company. But as he intrudes on my life, our hostile relationship evolves. He knows I’m still in love with Cole, but his dedication is my undoing.
Then a catastrophic moment changes everything.
Promises resurface. Lies entangle. And an impossible choice shatters my world.
I love two men, and I can only have one.

Two lies. Two men who don’t share.
I never stopped loving Cole. Not when he left me. Not when he disappeared for three years. Not when he crashed back into my life in a violent explosion of testosterone and fury. His sudden reappearance questions everything I thought I knew, including how I came to love another man.
Trace is an intoxicating breeze of seduction over ice. My rock. My second chance at forever. And he’s committed to annihilating the competition.
The battle that ensues wrenches me back and forth between them. Fighting and fucking. Resisting and submitting.
Together, they entangle me in a web of lies, rivalry, and desire that weaves as deeply as their devotion to me.
I love two men, and if I can only have one, I choose none.

New York Times and USA Today Bestselling author, Pam Godwin, lives in the Midwest with her husband, their two children, and a foulmouthed parrot. When she ran away, she traveled fourteen countries across five continents, attended three universities, and married the vocalist of her favorite rock band.
.
Java, tobacco, and dark romance novels are her favorite indulgences, and might be considered more unhealthy than her aversion to sleeping, eating meat, and dolls with blinking eyes.
Website | Facebook | Twitter | Amazon page | Goodreads | Instagram | Bookbub

Other books by Pam Godwin

Posted by Toni FGMAMTC at 1:30 AM No comments: 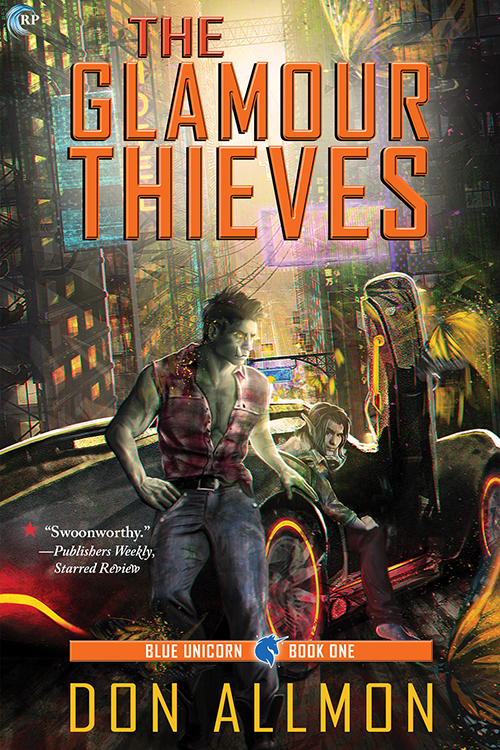 Howdy y'all. I'm Don Allmon and I got a debut book name of The Glamour Thieves. It’s the first of a three book series called The Blue Unicorn. It's a grim kind of fantasy, a cybernetic near-dystopia, a rough-edged romance with few promises except for the ones that matter. Ain't nothin' worth earnin' that wasn't hard won. Join in on the comments and win yourself some loot.

About The Glamour Thieves

JT is an orc on the way up. He’s got his own boutique robotics shop, high-end clientele, and deep-pocketed investors. He’s even mentoring an orc teen who reminds him a bit too much of himself back in the day.

Then Austin shows up, and the elf’s got the same hard body and silver tongue as he did two years ago when they used to be friends and might have been more. He’s also got a stolen car to bribe JT to saying yes to one last scheme: stealing the virtual intelligence called Blue Unicorn.

Soon JT’s up to his tusks in trouble, and it ain’t just zombies and Chinese triads threatening to tear his new life apart. Austin wants a second chance with JT—this time as more than just a friend—and even the Blue Unicorn is trying to play matchmaker.

“They argued over music because JT refused to play anything written this century. They argued what direction to take into town because Austin thought it was more dramatic to come to the rescue via the Golden Gate rather than the Bay Bridge. Comfortable arguments, an easy rhythm to fall into. They came in by the Bay Bridge listening to nothing.”

But music still had a lot to do with The Glamour Thieves even if JT wouldn’t let Austin run the truck stereo. The TV show Supernatural was a big influence on my story and this is one of the things I mined from that show.

Dean is a classic rock fan (as am I) while Sam’s taste is more contemporary. Not only does Dean’s music become the soundtrack for the show (Kansas’s “Carry on Wayward Son”), but their difference of opinion becomes a running joke. I wanted something like that.

Austin’s taste in music was easy to figure. He was my stereotypical hot elf. Dance clubs, sex clubs. Something raw, something dreamy. So:

JT’s a classic rock fan, but he’s also a big old cuddly softy with a secret penchant: When he gets all drunk and thinks no one is watching, the power ballads come out:

He sets the player on random and just listens to those four songs over and over again until Austin comes in, wordlessly pulls the plug, then walks out.

Throw the lyrics of these songs into a blender and you pretty much know everything you need to know about JT and Austin and their relationship.

In his night job, Don Allmon writes science fiction, fantasy, and romance. In his day job, he’s an IT drone. He holds a master of arts in English literature from the University of Kansas and wrote his thesis on the influence of royal hunting culture on medieval werewolf stories. He’s a fan of role-playing games, both video and tabletop. He has lived all over from New York to San Francisco, but currently lives on the prairies of Kansas with many animals.

To celebrate the release of The Glamour Thieves, one lucky winner will receive a $20 Riptide gift card! Leave a comment with your contact info to enter the contest. Entries close at midnight, Eastern time, on September 2, 2017. Contest is NOT restricted to U.S. entries. Thanks for following the tour, and don’t forget to leave your contact info! 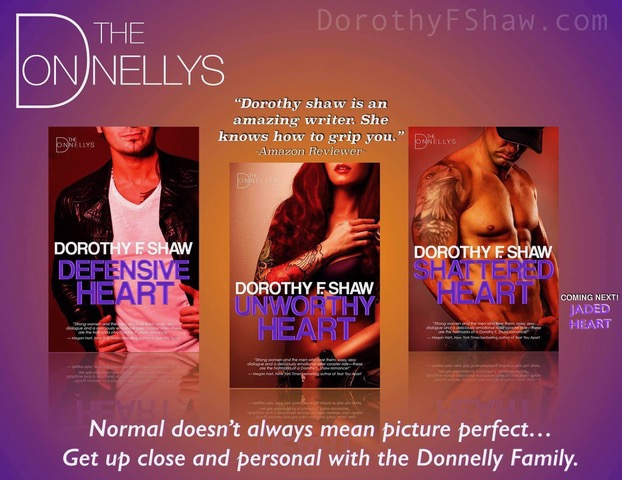 Get up close and personal with the Donnelly family as each sibling takes a journey through the trials and tribulations of everyday life…to finally find their one true love.

The Donnelly family may be a happy “normal” one, but they are far from perfect.