I'll Be Watching You by Leslie A. Kelly Book Blitz 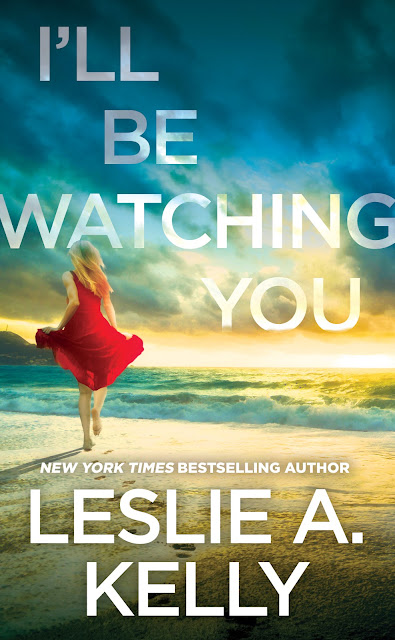 I'll Be Watching You
By Leslie A. Kelly
Genre: Romantic Suspense

Growing up as a foster kid, Jessica Jensen found her escape in movies-especially those starring teen heartthrob Reece Winchester. When she meets him as an adult, he's just as charming, fascinating, and devastatingly handsome as she'd imagined. Before she knows it, Jessica is falling hard. But her real-life Cinderella story is about to take a deadly turn...

Jessica has completely upended everything about Reece's carefully ordered life. There's a reason he's never allowed anyone to get so close to him before. But now that she has, there's a target on her back. Because someone knows that the Winchesters have been hiding some dark family secrets. Someone who is out there waiting to strike. Waiting...and always watching.

"Throughout this charged, fast-paced love story, Kelly expertly balances sensuality and intrigue. This will be a hit with readers looking for a
spicy contemporary romance." - Publisher's Weekly

As a film director, Reece Winchester was used to watching life through a camera lens, picturing angles, depth, color, and texture. He lived as a voyeur, removed from the action he oversaw, the unseen god of the worlds he created for moviegoers everywhere. Some people might see him as being aloof or uncaring. Hell, maybe he was. But he’d learned hard lessons throughout his life about trust, about grief, about tragedy and loss. Better to put a layer between yourself and the outside world, as far as he was concerned.
Maybe that’s why he was able to remain calm during this latest catastrophe. He only sighed as he stared at the charred remnants of his house, eying the wisps of smoke still rising from the ruin in the early morning light, was number one on that list.
“Damn, Reece, I’m so sorry,” said his brother Rowan, who’d been the one to call him at two a.m. to tell him about the fire. He’d repeated the phrase about a dozen times.
Reece had been shooting in the New Mexico desert, so his Beverly Hills home had been empty when it went up in flames last night. He’d spent most of the flight back being thankful he’d left his dog with his and had given the couple who looked after the place two weeks off. During other trips, he’d left Cecil B., his golden retriever, at home with the Scotts. He didn’t even want to think about what could have happened if they’d been there. Shit could be replaced. Lives could not. The loss of a couple of statues of a guy named Oscar was nothing compared to the singeing of one hair on the heads of his employees or his dog.
“Any idea yet what started it?” he bit out.
“I talked to the fire investigator. He already found accelerant.”
Accelerant. Arson? Jesus.
“Somebody hates me enough to burn down my house?” Reece murmured, a little more stunned by that fact than by the fire itself.
“It could have been a frustrated stalker who expected to find you at home.”
“And when I wasn’t, they decided to make sure I didn’t have a home to come back to?”
“You know it’s possible.”
Yes, it probably was. He’d had overzealous fans before, mostly during his acting days. They occasionally slipped from pushy into obsessive. He’d been dealing with a particularly bad one lately, who’d found out where he lived and had been leaving notes stuffed into the security gate. Perhaps that was who had gotten past the fence last night and decided to send his home up in a giant ball of flame that had, reportedly, been seen by people miles away.
“Do you ever wonder if we’re damned?” he asked.
He’d had this thought many times over the years but had never shared it with his twin.
“Don’t say that.”
He didn’t push, knowing Rowan had done a better job moving beyond all the dark episodes of the past. Reece, though, had found letting that go extremely difficult to do.
“You know you can stay with me for a while. At least until you find another place,” Rowan offered.
Reece nodded. “Dad has a spare room, too.”
Reece, his twin Rowan, and their baby brother, Raine, had bought their hardworking father, who’d supported them all his life, a big place on the beach a few months ago. His dad would hate to hear about the fire but would probably love some company.
Reece watched silently as firefighters walked the site. They carefully looked for any sputtering embers trying to reignite. With the drought, they also had to be sure no sparks landed on a nearby roof, spreading the conflagration to the entire neighborhood.
“Why don’t we get outta here?” Rowan asked. “You’ve given your statement. You don’t have to stay. Want some breakfast? We can pick up Cecil B. and take him out for pancakes.”
Seeing his dog sounded like a great idea to Reece. “Sure.” He was hungry, as, he suspected, were the sweaty, exhausted firefighters. He’d already put in an order for cold drinks and food for the guys who’d tried so hard to rescue his six-thousand-square-foot house.
Just a house. Just a building. Right.
Frankly, the worst part wasn’t the fire, but the realization that someone had set it. He was in somebody’s crosshairs. The knowledge unsettled him.
“Surfing after?” They hadn’t surfed together in months, both of them having busy schedules, and Reece 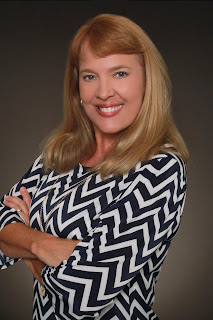 Leslie lives in Colorado with her husband of 34 years and two spoiled dogs.
Visit her "alter ego" site--www.lesliekelly.com--to learn more about her sexy contemporary romances.

Posted by Toni FGMAMTC at 9:04 AM No comments:

Email ThisBlogThis!Share to TwitterShare to FacebookShare to Pinterest
Labels: blitz, Leslie A. Kelly

The Marshal’s Mobster (Yours to Protect: Book Four) by Este Holland Cover Reveal

Book Title: The Marshal’s Mobster (Yours to Protect: Book Four)

This witness is more than he seems.

Jericho Alvarado has been stuck babysitting a former mob boss in Alaska for months. He’d rather be hunting down fugitives with his fellow marshal’s, but Damian Corsetti is no ordinary witness. He made demands the District Attorney’s office had to meet or risk losing their star witness.

And having Jericho protect him was his biggest demand.

A former heavy hitter in the Vegas mafia, Damian knows all about the who’s who of Organized Crime. With a target on his back and so much at stake, it’s hard to know whom to trust.

When their cover is blown, they hit the road only to find out that Rio, Rake and Carter have been kidnapped.

Together, Jericho and Corsetti, along with their most trusted friends, must work together to find them and bring down their enemies…

Jericho put his arm out, keeping Corsetti and Flip behind him. Corsetti turned to watch their six, and Jericho silently thanked him. They shouldn’t have listened to Corsetti’s demands. He’d only agreed to Jones’s help, so Jericho could have a break every now and then. But he’d demanded Jericho be the only regular marshal on his detail. The idea was to cut back on the chance of betrayal, but another marshal would have been welcome right about then.

He eased around the corner of the hallway. The living room light flipped on and they froze. They’d have to pass the entryway to get to the garage. He started to back them up. One hand on Corsetti’s stomach.

Jericho stopped. He shouldn’t have, but the voice sounded non-hostile. Amused even.

Corsetti put his hand over Jericho’s where it rested on his abs. He snatched it back and held up one finger. Stay.

He inched toward the entryway. “Yes?”

“Whatever you gets you off, man. I was sent by Special Agent of Homeland Security, Luke Kairo.”

“Kairo? James Kairo’s brother?” Jericho’d had a lot of long talks with his boss, Gannin West.

He and Corsetti glanced at each other.

Este Holland is a writer and reader of all things Romance. She's also a treasure hunter, a word wizard, a lover, and a fighter. She was born and raised in WV, and now lives in Virginia. She works in marketing during the day. She began writing novels in 2012.

Posted by Toni FGMAMTC at 5:00 AM No comments: 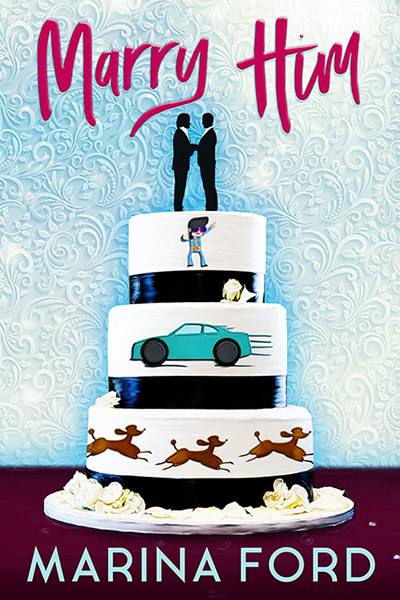 Blurb:
Joe Kaminski likes to go with the flow, a good trait to have as a young artist living in London. His laidback approach to life makes him a fish out of water when he’s hired at P&B Designs, a high-powered PR agency. The money’s good, but with his poor planning skills, he doesn’t see it lasting.
Harry Byrne likes his life the same way he likes his PowerPoint presentations: structured. Known for his dynamic personality, Harry suffered a blow when his seven-year relationship fell apart, souring his mood. The last thing on his mind is getting into another relationship, especially with a man who can barely make it to the office on time.
They’re not even supposed to like each other. But five years later, Joe and Harry are getting ready to tie the knot. They should’ve known it was only a matter of time before everything starts to fall apart: obstructive friends, well-meaning but meddlesome family, a hovering ex, international incidents, fires, pregnancies, and an airport chase. It seems their “I do”s were doomed from the start.
Available now from Riptide Publishing! 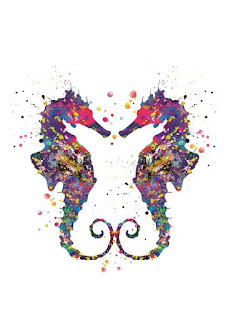 Bio:
Marina Ford is a thirty-three-year-old book addict, who would, if permitted, spend all of her time in bookstores, libraries, or in her own bed with stacks and stacks of books. Luckily, she has a husband and a dog, who force her to interact with humans of planet Earth from time to time. In fact, she so enjoyed falling in love with her husband that she can’t resist evoking those same feelings in the love stories she writes. She does not believe in love at first sight—but she does believe in the happy ever after, though it must be earned. She likes her stories to be light, since real life can be miserable enough without making up more of it in fiction.
She lives in England, loves rain (gives one an excuse to stay at home and read books, right?), long walks (when it doesn’t rain), history, Jane Austen, the theatre, languages, and dogs. It is her dream to one day possess an enormous country house in which each room is a library (okay, maybe except for the kitchen), and in which there are more dogs than people. A smaller and perhaps more realistic dream is to make people smile with the things she writes.

Giveaway
To celebrate this release, one lucky person will win a $15 gift card to Riptide! Leave a comment with your contact info to enter the contest. Entries close at midnight, Eastern time, on March 7, 2020. Contest is NOT restricted to U.S. entries. For more chances to enter, follow the tour, and don’t forget to leave your contact info!