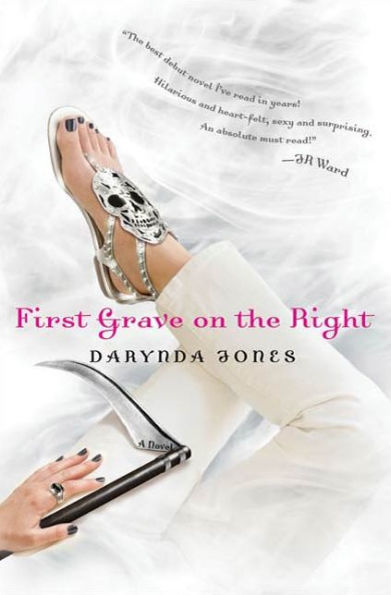 This whole grim reaper thing should have come with a manual.
Or a diagram of some kind.
A flow chart would have been nice.
Charley Davidson is a part-time private investigator and full-time grim reaper. Meaning, she sees dead people. Really. And it's her job to convince them to "go into the light." But when these very dead people have died under less than ideal circumstances (like murder), sometimes they want Charley to bring the bad guys to justice. Complicating matters are the intensely hot dreams she's been having about an entity who has been following her all her life...and it turns out he might not be dead after all. In fact, he might be something else entirely. But what does he want with Charley? And why can't she seem to resist him? And what does she have to lose by giving in?
With scorching-hot tension and high-octane humor, First Grave on the Right is your signpost to paranormal suspense of the highest order.
https://darynda.com/books/first-grave-on-the-right
Kobo / B&N / Amazon

First Grave on the Right by Darynda Jones
My rating: 4 of 5 stars


First Grave on the Right has a strong female lead, action, mystery, a bit of comedy and some light suspense. Charley is a grim reaper but not in the traditional way they are usually portrayed. After people die, she sometimes helps them with unfinished business and provides them a portal to the other side. There are often spirits of the deceased around. She's friends with several. In this book, she helps cops and the murder victims solve the case of who killed them and why. There's also a being similar to the ones she sees daily but very different. She's majorly attracted to him so she must figure out if he is he dead or alive and who or what he is. Charley is one of a kind. She can't stay away from trouble, but she never lets that keep her down. I enjoyed following along. The side characters and interactions were fun. I plan to continue the series.