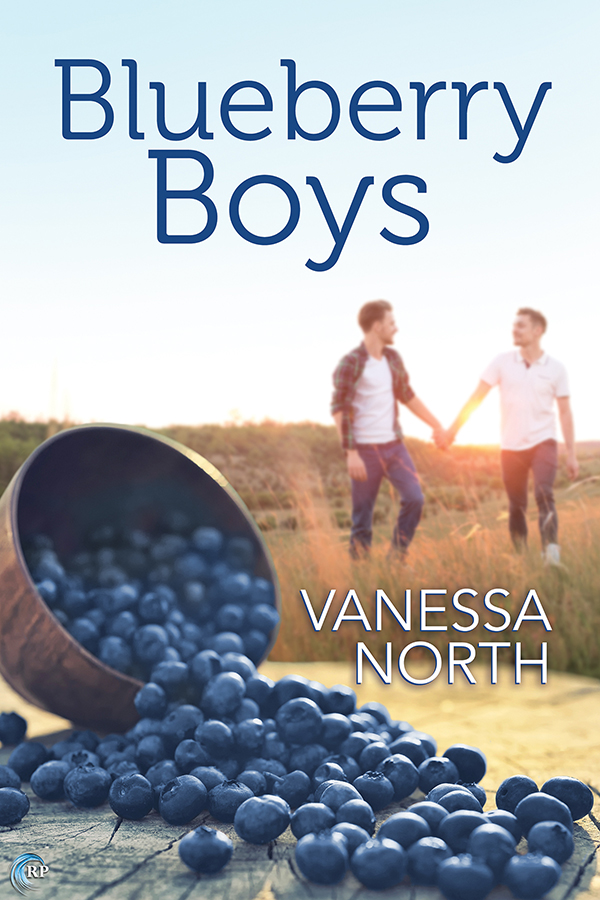 Hello! I’m Vanessa North—welcome to the Blueberry Boys blog tour! At various tour stops, I'll be sharing character interviews, blueberry recipes, a confession about a certain guilty pleasure that partly inspired this story, and more. Comment on each stop to be entered in a drawing for a $30 Amazon gift card. Thanks for joining me on the tour!

Connor Graham is a city boy—a celebrated fashion photographer in New York. When his uncle’s death drags him back to the family blueberry farm, all he wants to do is sell it as quickly as he can. Until he meets his uncle’s tenant farmer.

Jed Jones, shy and stammering, devout and dedicated, has always yearned for land of his own and a man to share it with. Kept in the closet by his church, family, and disastrous first love, he longs to be accepted for who he is. But now, with his farm and his future in Connor’s careless hands, he stands to lose even the little he has.

Neither man expects the connection between them. Jed sees Connor—appreciates his art and passion like no one else in this godforsaken town ever has. Connor hears Jed—looks past his stutter to listen to the man inside. The time they share is idyllic, but with the farm sale pending, even their sanctuary is a source of tension. As work, family, and their town’s old-fashioned attitudes pull them apart, they must find a way to reconcile commitments to their careers and to each other.

Author of over a dozen novels, novellas, and short stories, Vanessa North delights in giving happy-ever-afters to characters who don’t think they deserve them. Relentless curiosity led her to take up knitting and run a few marathons “just to see if she could.” She started writing for the same reason. Her very patient husband pretends not to notice when her hobbies take over the house. Living and writing in Northwest Georgia, she finds her attempts to keep a quiet home are frequently thwarted by twin boy-children and a very, very large dog.

To celebrate the release of Blueberry Boys, Vanessa North is giving away a $30 Amazon gift card! Your first comment at each stop on this tour enters you in the drawing. Entries close at midnight, Eastern time, on December 5, 2015. Contest is NOT restricted to U.S. Entries. Follow the tour for more opportunities to enter the giveaway! Don’t forget to leave your email or method of contact so Riptide can reach you if you win!

Connor is back to visit his hometown for the first time in several years. Growing up without much support in the way of family in a town where being gay wasn't largely accepted led to him moving to the city and never looking back. He's only returning now to attend his uncle's funeral and determine what to do with the land inheritance.

Jed comes from a big religious family. Unlike Connor, Jed is not open about being gay. He's afraid to let anyone know because if it affected his reputation negatively, in a small town the impact could be detrimental. Jed already has the added pressure of stuttering and running a farm, which isn't a secure job.

As Connor and Jed spend time together getting to know each other, they see things differently and are inspired to make changes in their own lives. I'm not a fan of a lot of ridiculous drama so I super appreciate the realness of this story. Yes, there are issues for the characters to overcome. Everything isn't perfect in their world, but it happens realistically.

Blueberry Boys is easy to follow and understand. It's sweet, sexy, thoughtful and romantic. After reading it, I had a satisfied, uplifted, happy feeling. I recommend it those looking for a subtle story of life and love.