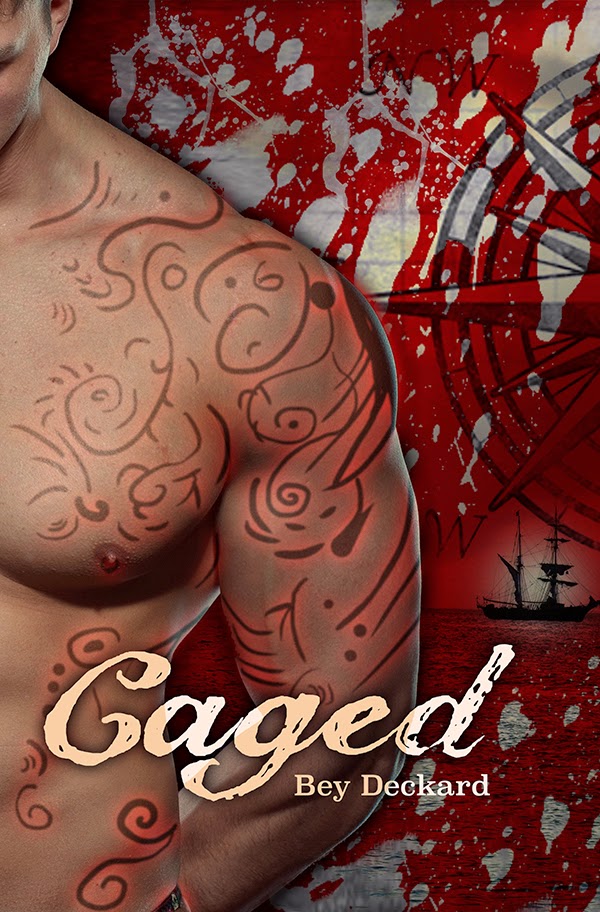 Caged: Love and Treachery on the High Seas
(Baal's Heart #1)
by

Caged: Love and Treachery on the High Seas from bey.d on 8tracks Radio. 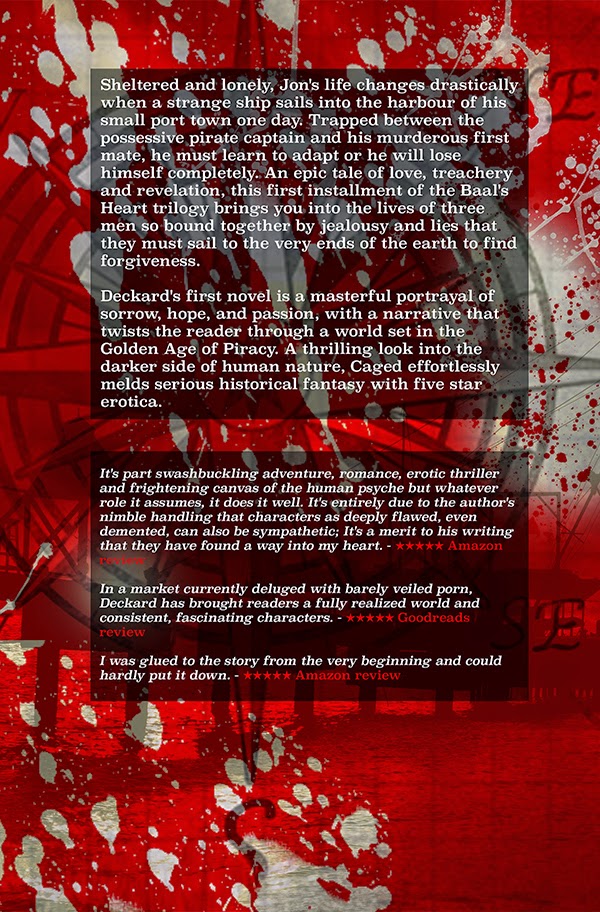 Sheltered and lonely, Jon's life changes drastically when a strange ship sails into the harbour of his small port town one day. Trapped between the possessive pirate captain and his murderous first mate, he must learn to adapt or he will lose himself completely. An epic tale of love, treachery and revelation, this first installment of the Baal's Heart trilogy brings you into the lives of three men so bound together by jealousy and lies that they must sail to the very ends of the earth to find forgiveness.
Deckard's first novel is a masterful portrayal of sorrow, hope, and passion, with a narrative that twists the reader through a world set in the Golden Age of Piracy. A thrilling look into the darker side of human nature, Caged effortlessly melds serious historical fantasy with five star erotica.
Themes: BDSM, M/M Romance, Erotica, Historical Fantasy, Ménage, Enemies to Lovers

Artist, Writer, Dog Lover.
http://www.beydeckard.com
Born and raised in a small coastal town in northern Québec, Bey spent his early summers on his uncle’s boat and running wild on the beaches of the surrounding islands, lighting fires and building huts out of driftwood and fishermen’s nets. As an adult, he eventually made his way to university and earned a degree in Art History with a strong focus on Anthropology. Primarily a portrait painter and graphic artist, Bey sat down one day and decided to write about the two things that he felt most passionate about: sex and the sea.
Bey currently lives in the wilds of Montréal with his best buddy, a spotty pit bull named Murphy. Caged: Love and Treachery on the High Seas is his first novel. 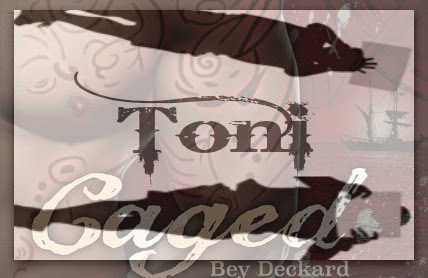 Caged: Love and Treachery on the High Seas by Bey Deckard

This book was suggested to me. If I would have been picking something on my own, I would not have went for it. It's historical, which I figured wouldn't be my thing, but I absolutely loved it! I was looking for something different so this definitely fulfilled that request.

Jon is unhappy and sickly, but he's also special. His powers of observation are better than the average person so his skills are in high demand. He's awkward and tends to keep to himself. In the days before video cameras (or any electrical devices), credit card trails and DNA testing, Jon's ability to read others and follow his gut has him being used by the higher-ups to interrogate prisoners. He's never shown love or friendship, only used like any other tool.

Baltsaros is a pirate ship captain. He's also very mysterious. In my mind, he's kind of a medicine-man/voodoo priest/Dom. Baltsaros is a crazy pirate, but a great leader. He's not a good guy, but he's fair to his crew.

Tom is the first mate. It's hard to know how to take him. Is he sweet underneath a protective shell? Is he coo-coo wrapped in muscles? Tom is wickedly perverse and a natural sailor. He's guaranteed to have a side that will flip your switch.

So these three men are on a boat together. The sexual tension is so thick it fogged up my kindle screen. Don't worry all these desires come to fruition several times with the men in groups of two and three. But is there enough room on this ship for these three large personalities?

However, when Baltsaro's thick cock pushed slow and hard into his body, Jon captured Tom's mouth with his own, forcing himself to relax into the sensation of being stretched wide. He groaned loud, and Tom twisted his fingers into Jon's dark curls, kissing him with frantic, rough passion.

Baltsaros began fucking Jon with long strokes that drove him hard into Tom's body. It was perfect and exquisite, this feeling of fucking and being fucked.

And...while all of this is going on, we have battles, deaths, explosions, missing limbs, whore houses at the end of the world... There are even some women characters with pretty significant roles. It's a very well-rounded tale.

Everything brought out in the storyline is just a another puzzle piece to the overall enigma that is Baal's Heart. I'm eager to find out more.