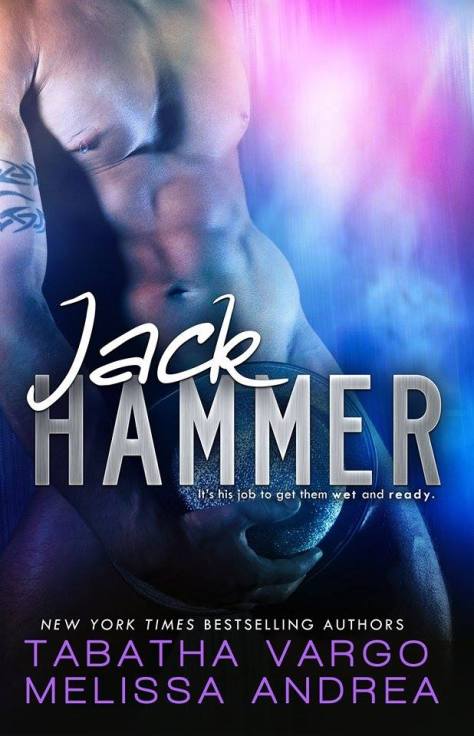 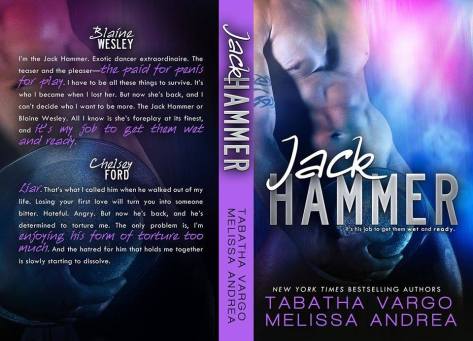 Blaine Wesley I’m the Jack Hammer. Exotic dancer extraordinaire. The teaser and the pleaser—the paid for penis for play. I have to be all these things to survive. It’s who I became when I lost her. But now she’s back, and I can’t decide who I want to be more. The Jack Hammer or Blaine Wesley. All I know is she’s foreplay at its finest, and it’s my job to get them wet and ready.

Chelsey Ford Liar. That’s what I called him when he walked out of my life. Losing your first love will turn you into someone bitter. Hateful. Angry. But now he’s back, and he’s determined to torture me. The only problem is, I’m enjoying his form of torture too much. And the hatred for him that holds me together is slowly starting to dissolve. 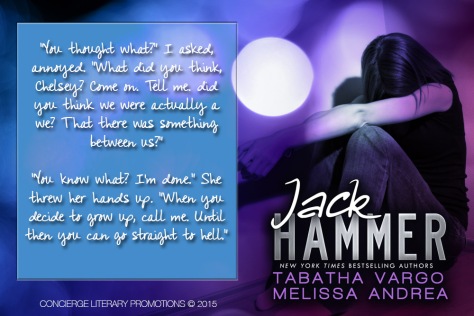 Tabatha is a NEW YORK TIMES and USA TODAY bestselling author, but mostly she's a sweet tea sippin', front porch sittin' kind of girl from South Carolina. She loves old, historical anything, wind chimes, and all things romantic. She's the mother of an 9 y/o rockstar/princess and the wife of her very own Prince Charming.

When she isn't writing, she's texting book ideas to herself. Tabatha is represented by Jane Dystel of Dystel & Goderich Literary Management.

I find it hard to sum up my life in a paragraph, but I’ll try. Reading has always been a passion for me and writing is as instinctive as breathing. Every inhale is an idea; every exhale a creation. Flutter, The Discover Series, was my debut release and since then I have written a contemporary romance duet- The Edge of Darkness and The Grace in Darkness. I also co-wrote Little Black Book and The Wrath Of Sin with Tabatha Vargo. The only thing I do better than writing? Making beautiful, sassy, and independent girls. My daughter’s will always be my greatest accomplishment, my biggest fans, and my every inspiration. I live, breath, and would die for them! I’ve been married to one of the greatest men in my life for eight years and I love him more than chocolate (you know shit just got real :), Justin Timberlake and Friday’s. Without him, my website would be a mess and I would probably being paying more taxes than I should be. He’s a jack of many trades, and this is just my opinion, but I like to think besides my daughters, I’m his second biggest accomplishment. (Does anyone else hear a horn tooting?) I was born in Denver, Colorado, but I grew up in sunny Arizona. I currently live in South Carolina. I don’t have a big family, but I’m close with my sister, brother & mom. My mom is my hero, my reality check, and I couldn’t have asked for a more amazing person to be raised by. She has supported me throughout this crazy adventure and I’m lucky to have her on my side! 6 things you should know about me: 1. I’m a tornado with lipstick! Translation: I’m very girly, but I can get down and dirty with the best of them. 2. I adore the color pink! 3. I love things that sparkle (including vampires!) 4. I like even numbers (hence 6 things about me, not 5) 5. I’m loyal to a fault, but I like to see the good in everybody. Don’t mistake my kindness for weakness though because my bark is not always bigger than my bite :)) 6. I don’t like calling readers ‘fans’. When it come down to it, I am all YOUR biggest fan! MWAH! I will never be able to thank every reader, every blogger, or every author who has helped me in one or a million ways since I published, but I will try every chance I get. Y’all are the reason I’m here and every comment, every message, and every review makes me feel like I have a reason to be. So to the moon and back, THANK YOU! Mwah! Okay, so this was a little longer than a paragraph.

I'm so torn in how I feel about this book. First, I thought it was going to be all super hot sex, but it's half NA, which was actually a nice surprise. I loved a lot of the book, thought some was okay, and didn't like some.

It begins shockingly sexy in a full service male strip club, but immediately goes back to how it all began in high school. I delighted in a good portion of this part. I was seriously thinking 5 stars for much of it. She's the virginal nerdy good girl, and he's the hot bad boy. It's sounds cliché, but it didn't seem that way while reading. She isn't all like oh I wish I was popular and outgoing. She's just focused. She wants to go to an Ivy League college to be a doctor, and she doesn't want high school antics spoiling her plans. He's not the I don't care looser turned good guy either. He actually is a great son and brother. He's just more worried about helping his family than school. She's rich. He's poor. Both have decent family lives and parents.

I wanted to run after her, but I knew chasing after her was like chasing after the sun. She was impossible to catch and when I got close, she burned me.


Issues arise. Fast forward to the current. Bits of this part were ok for me, and sometimes I had difficulty. One thing that would have helped overall with the book in general, in my opinion, is leaving some out. Some of the story isn't needed. I did receive an unfinalized copy that was headed for edits after I think, so much of it could be cleaned up by release time. I don't want to give away spoilers, but I had a problem with the way they treated each other and the misunderstandings. They seemed more mature in high school. Some people like to read those types of dramatics, but I don't, so it may be a nonissue for most people, may just be me.

Concerning Blaine's job, which is how the book got it's name and what I was assuming the entire book would be about, I liked it. Some may have complications with it, but I did not.

As I said before, I loved some parts and disliked others so I'll just average to get an overall rating. I think it will be a favorite for many.