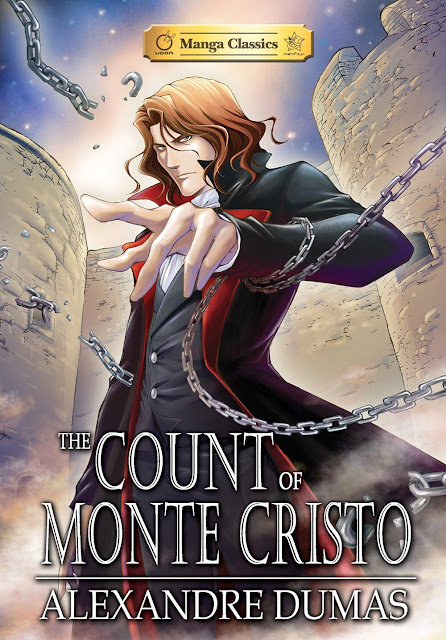 A Conspiracy and a miscarriage of justice turn the gentle Edmond Dantès into an implacable agent of fate: The Count of Monte Cristo . Obsessed by vengeance and empowered by providence, the Count avenges himself on whose who have wronged him - but is this justice, or is this hubris? In the end, does even the Count know?
Alexandre Dumas' skillful narrative combines intrigue, betrayal, and triumphant revenge into a powerful conflict between good and evil. Now this exciting saga, rich and diverse, takes on an entirely new life in this Manga Classics adaptation!
https://www.goodreads.com/series/233923-manga-classics
On the very day of his wedding to the beautiful Mercedes, a young merchant sailor named Edmond Dantès is falsely imprisoned for life, laying to waste his plans of marriage and hard-earned fortune. Following several long years in prison he has managed to escape and reinvent himself as the mysterious Count of Monte Christo. It is the reign of Napoleon Bonaparte and the Count has been plotting his revenge on the three men who had him falsely imprisoned. With a new identity, an incredible education abroad and a vast fortune, has returned completely unrecognizable to those who had committed their crimes against him.
https://www.mangaclassics.com/the-count-of-monte-cristo

The Count of Monte Cristo is yet another fantastic adaptation for Manga Classics.  The manga format brings excitement to this timeless classic and a new level of context for the next generation readers.   Manga Classics continue to garner praise from across the spectrum from teachers, librarians, and trade publications such as Publishers Weekly, VOYA (Voice of Youth Advocates), and School Library Journal.

Manga Classics: The Count of Monte Cristo by Stacy King
My rating: 4 of 5 stars

I am impressed with this. I love the original book, but it is very long. The story adaptors and artists did a great job of translating the original into a manga and still telling its story. They even included portions at the end explaining some changes and information about real locations within the story and the characters. I loved the artwork and the whole idea of making a classic into a manga. This was an enjoyable experience for me.