Who We Are by T.J. Klune Review 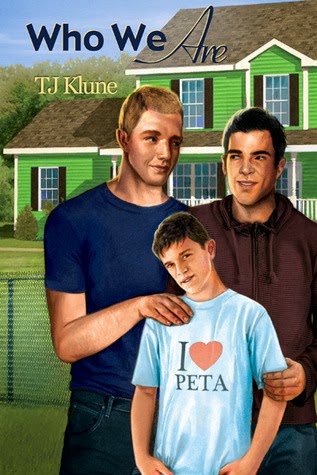 Sequel to Bear, Otter, and the Kid
Bear, Otter, and the Kid survived last summer with their hearts and souls intact. They’ve moved into the Green Monstrosity, and Bear is finally able to admit his love for the man who saved him from himself.
But that's not the end of their story. How could it be?
The boys find that life doesn’t stop just because they got their happily ever after. There’s still the custody battle for the Kid. The return of Otter’s parents. A first trip to a gay bar. The Kid goes to therapy, and Mrs. Paquinn decides that Bigfoot is real. Anna and Creed do… well, whatever it is Anna and Creed do. There are newfound jealousies, the return of old enemies, bad poetry, and misanthropic seagulls. And through it all, Bear struggles to understand his mother’s abandonment of him and his brother, only to delve deeper into their shared past. What he finds there will alter their lives forever and help him realize what it'll take to become who they're supposed to be.
Family is not always defined by blood. It’s defined by those who make us whole—those who make us who we are.

When TJ Klune was eight, he picked up a pen and paper and began to write his first story (which turned out to be his own sweeping epic version of the video game Super Metroid—he didn't think the game ended very well and wanted to offer his own take on it. He never heard back from the video game company, much to his chagrin). Now, two decades later, the cast of characters in his head have only gotten louder, wondering why he has to go to work as a claims examiner for an insurance company during the day when he could just stay home and write.
He lives with a neurotic cat in the middle of the Sonoran Desert. It’s hot there, but he doesn’t mind. He dreams about one day standing at Stonehenge, just so he can say he did.

Who We Are by T.J. Klune

I cannot explain how much I love this story and these people.

Before I even got past the first 20% I was laughing so hard that I had tears running down my face and neck, my eyes were swollen. As embarrassing as it is, I have to admit, I ending up peeing on myself and then throwing up because I just could not for the life of me stop laughing so hard. I mean just wow.

I love how unique this character line-up is, the wide age range, the realness to them all. I love them all for their differences they lend. Bear, being the storyteller of the book, gets my attention the most with all of his neurotic head trips, but it's how they all play off each other that makes this so amazing.

Your family needs you, Bear. You're the one thing that holds them all together, and without you, they're just as lost."

Just looking through all of my book highlights makes me start giggling again.

"So would you call yourself a...hmmm, that doesn't sound appropriate..a 'nasty come hungry bottom dumpster bitch'?"

"Would either of you be going in drag?" the Kid asks. "I was researching gay history and I'm quite taken with drag queens. They have cool hats and stage names. I found a drag queen name generator online, and my drag queen name is Minerva Fox. I would probably sing a lot of Barbra."
"Who's Barbra?" I ask him, glancing at Otter. Otter looks as baffled as I do.
He shrugs. "All the pictures I saw said that drag queens sang Barbara. I don't even know what that means."

And of course I can't forget the sexy.


An hour later, we lay next to each other, spent and gasping, his spunk trickling out of my ass and down my thigh [...]


I told him that we would grow old together, that I'd be there to make fun of him when he started to get fat and bald, when he'd get spots on his hands. I told him we'd build a little house by the beach, and we'd sit on the porch wrapped up in a blanket and that the world would pass us by and that it was okay. It was okay because we'd have lived it all already.

I'm not leaving out all the tears. Yes, I cried a lot, again.

This book is amazing! T.J. Klune is a wonderful, magnificent, glorious story teller.