In Your Eyes by Cardeno C. Review 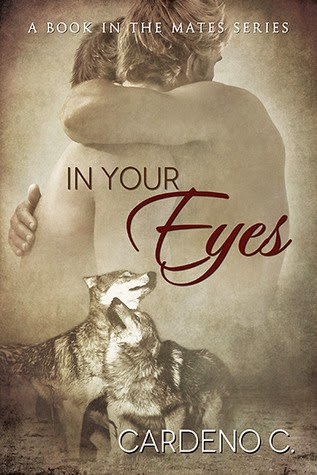 Raised to become Alpha of the Yafenack pack, Samuel Goodwin dedicates his life to studying shifter laws, strengthening his body, and learning from his father. Taking control comes easily to Samuel, but relating to people, including those he's supposed to lead, is a constant challenge.


When Samuel meets Korban Keller, the son of a neighboring pack’s Alpha, he reacts with emotion instead of intellect for the first time in his life. Resenting the other shifter for putting him off-balance, Samuel first tries to intimidate Korban and then tries to avoid him. What he can’t do is forget Korban’s warm eyes, easy smile, and happy personality.


When a battle between their fathers results in tragedy, Samuel and Korban are thrown together. With his world crashing down around him, Samuel must save his pack and show them he can lead. But first, Korban needs to save Samuel by inspiring him to feel. Two very different men with a tumultuous history must overcome challenges from all sides and see past the rules they’ve been taught to realize they are destined to fit together.

Wake Me Up Inside by Cardeno C.

For the first part of this book I wasn't feeling it. I questioned whether or not to stop reading it. But it all the sudden really picked up for me. I was very interested to see how the whole relationship fit together within the shifter world after they mated. It ends with some interesting leads that will probably carry and be explained further in book 2.

Until Forever Comes by Cardeno C.

Even though this book is the 2nd in the series, it's story takes place first chronologically. I really loved getting the background and connections from book 1 explained.

This book started out okay for me and got better as it went, much the same as the first book was in my opinion. When the mythology of the characters started taking over, it pulled me in more.

Also I love the mentioning of the mating knot. Anything animalistic seems so hot to me.

My already impossibly hard rod swelled further, getting thicker, longer, and then, just when I thought I couldn't take another moment of pleasure, I felt my mating knot pushing against Miquel's pucker.
"Holy fuck!" Miguel cried out. "What is...what is..." I shoved forward and circled my hips at the same time, wedging my way inside my mate's body. "Ahhh," Miguel shouted, never slowing his movements. If anything, he pushed back harder against my prick, locking the mating knot within his warm channel.


Thinking of poor Miguel before Ethan was sad.

I've lived for four hundred years, and spent almost every one of them feeling lonely and hungry and cold, deep down.


So reading of them together was sweeter than than the average couple.

[...] snuggled on my mate's warm chest, enjoying the feeling of his skin against mine and the realization that I'd have this for the rest of my life. "Until forever comes"

I'm looking forward to more of this series.

Cardeno C. - CC to friends - is a hopeless romantic who wants to add a lot of happiness and a few "awwws" into a reader's day. Writing is a nice break from real life as a corporate type and volunteer work with gay rights organizations. Cardeno's stories range from sweet to intense, contemporary to paranormal, long to short, but they always include strong relationships and walks into the happily-ever-after sunset.
Cardeno's Home, Family, and Mates series have received awards from Love Romances and More Golden Roses, Rainbow Awards, the Goodreads M/Romance Group, and various reviewers. But even more special to CC are heartfelt reactions from readers, like, "You bring joy and love and make it part of the every day."

In Your Eyes by Cardeno C.

First I have to say that these book covers are perfect for this series. They do a great job of transforming the words of the story into a picture.

Since this is the third book of the series, I'm more familiar with how things work in this shifter world and how things are for true mates.

In Your Eyes is the story of Samuel and Korban. Although it's told from Samuel's POV, Korban is my favorite. Actually he is probably my favorite of all the characters from the Mates series. He is so sweet, empathetic, kind, considerate, understanding, compassionate, easy going, friendly, light-hearted, selfless—really I could just go on and on. Samuel is smart, strict, OCD, all business, distant.

From the very beginning, they know something is different when they are around each other. For Samuel, someone that doesn't do well with the unknown, it's a scary thing.

"Samuel," he said quietly.
I looked back at him over my shoulder.
"It's going to be fine."
I had no idea what he meant, but then I never seemed to know what he meant.
"Maybe not right now, but eventually, it'll be fine."
My confusion obviously showed on my face, because he smiled once again, this one gentle and understanding.
"I promise. I'll take care of things. No matter what, you'll be fine."


Since they belong to neighboring packs, they don't spend time together daily. Whenever the opportunity presents itself to socialize, Korban is all about being near Samuel, but Samuel just doesn't know how to handle it. If Samuel where a real-life person with all his advanced intelligence, fixations on things being correct and aversion to human contact, he would most likely be diagnosed with Autism Spectrum Disorder and possibly even Sensory Processing Disorder. Korban is older and bigger but has the patience of a saint so they are obviously the yin to other's yang.

After all this focus on the difficulties Samuel has, we then find out what an angel Korban is because he has had a super crappy upbringing and has never thought twice about it. If you could look inside his brain, it would pretty much be the word "Samuel" floating around bouncing off the inner walls of his skull.

Oh, and their dads are enemies, and they get dragged into the fight. Drama and heartache, check. There are also small bits or mentions of the previous true mates. Overall I enjoyed reading this series. I especially loved Korban's playfulness and the sexy scenes.