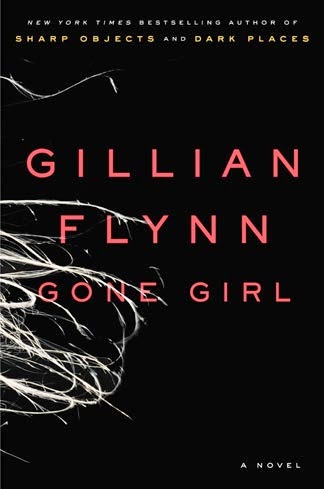 I've gotta figure out where to begin in saying how I feel about this story. First off, I finished it a few days ago, and I'm still thinking about it all the time. . . ALL. THE. TIME. That is a major deal to someone who reads as much as I do. So many are forgotten immediately. I don't think I will EVER forget this book. I listened to the audio version on CD, and I really recommend it. They did an excellent job.

I'm the type of person that can usually figure out where the storyline is headed pretty easily. I knew this was a popular story, but I made sure to learn nothing about it before starting. My initial thought of what was going on as far as Amy's disappearance was correct, but the way the story is written, I was unable to fully commit to that idea. The author had me questioning my theory often.

Amy's journal lead me to believe she was crazy; yet, at the same time, I totally got a lot of what she was saying. Then when she really let loose, just wow. Her whole cool girl rant. . . wowza.


And Nick, he was so socially awkward he didn't help himself at all. His thoughts were so out there; yet, again, I totally got them.

Like a child, I picture opening her skull, unspooling her brain and sifting through it, trying to catch and pin down her thoughts.


When the truth was revealed about what actually happened with the disappearance of Amy, I was not expecting things to go the way that they did. A certain character in this book goes above and beyond in the genius psychopath role. I'm in awww, amazed and repulsed. The character is like a hero and a villain rolled into one.

I love psychology whether it's seeing the disorders within a story or it being used on me, the reader. This book has both. I will definitely be reading more from this author.

FangirlMoments and My Two Cents