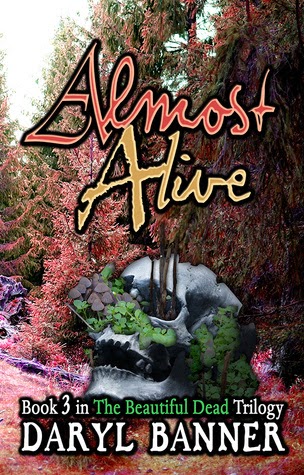 Twelve years have passed since the devastation.

The world is changed. What once was a planet struggling to survive is now a planet bursting to life. The humans are thriving. Gardens are growing. Trees are reaching up to the sky and the Undeadly clutch on the planet is slowly letting go.

But what does that mean for Winter and her friends?

In the wake of spring, the last of the desperate Undead gather, fighting to maintain their place in a world that no longer wants them. Mother Nature slowly but certainly works to purge the planet of the Dead, just when Winter thought she had finally embraced this Second Life.

Her new friends are back and old nemeses return for the final chapter in Winter's Undead journey.

In fact, the whole world’s dead. Every single person, apparently. Unburied and reimagined into a beautiful living-dead woman called Winter, she is doomed to spend the rest of eternity in a quaint, peaceful city with no hunger, no sickness and no bills to pay. Her Second Life is perfect in every way possible.

So why is she so bent on destroying it all?

After angering the mayor, befriending rebel headless teenagers and igniting romance with a dark and brooding neighbor, she finds herself wrestling madly with a First Life she cannot remember and this Second Life she cannot accept. Not to mention the maniacal army of rotting corpses who want her dead. Again.

But none of that matters in comparison to an even worse problem. There’s a guest in her house. A rude, good-looking man on the run ... a man with a heartbeat.

No one said being an Undead is easy.


Winter’s Second Life became a lot more complicated when the Living moved into her hometown of Trenton. Undead neighbors fight with their Breathing ones. Food is sparse. And, worst of all, the season is taking a change for the colder.


A desperate plea for help to a neighboring city turns deadly and soon Winter finds herself facing an old friend from her past whose plot to annihilate all life on the planet may have everything to do with her.


And what about the man-with-the-heartbeat in her house? Is there even room for love in such a ruined, unforgiving world?
New friends are made. Others are lost forever. In the dead of winter, no one is safe.

Daryl Banner is a writer and composer who graduated from the University of Houston with a degree in Theatre and Psychology. After writing several plays and a musical in college, he started composing for short films and websites, one of which is the Vamplets "Baby Vampyre Dolls" website: (www.vamplets.com)

Writing this review is very difficult. How does a person convey the depth within an amazing book like this? It's one of the best stories I've ever read so I don't think anything I write will do it justice. Almost Alive is an epic fantasy that has something for every type of reader.

Winter and my favorite cast of zombies and humans in a post-apocylptic world are back one final time. Previously the world was dying. The people, plants and animals were going extinct. Now it seems the planet may be ready to brace a new age.

This story has the entertainment factor. It's very imaginative and original with plenty of action and adventure. There are undead, giant spiders, magical rocks and loads more attention grabbers. The plot is very steady, no falling off, no getting stagnate. Every character is on a mission.

Matters of the heart are also a part. Friendship, familial love and romance all play roles in the overall storyline. Many of these characters have been through so much with each other through life and death. It's very touching and tearful. Prepare yourself for some major feels.

Isn't that how all our most precious things are lost? In one silly, insignificant moment?

For those wanting to deepen their experience, this book takes it to a whole new level. The meaning of existence, the circle of life, the afterlife; it's all in there. The way this series has unfolded leaves me in awe. From the first time I read it, I've been in love with this author's writing style. The Beautiful Dead trilogy overall has the perfect quirkiness and individualness, revolutionary for the entire zombie genre.

This is my #1 read of the year. It reached my soul, and really isn't that why we read, to be transported from our world into another, to know the personas as we know ourselves, to rejoice in victories, to smirk at snide humor, to morn the dead, to realize it's all worth it, to be changed forever more.

The world is suddenly so full of beauty and poetic reciprocity and meaning.