The Deep of the Sound by Amy Lane Blog Tour Review 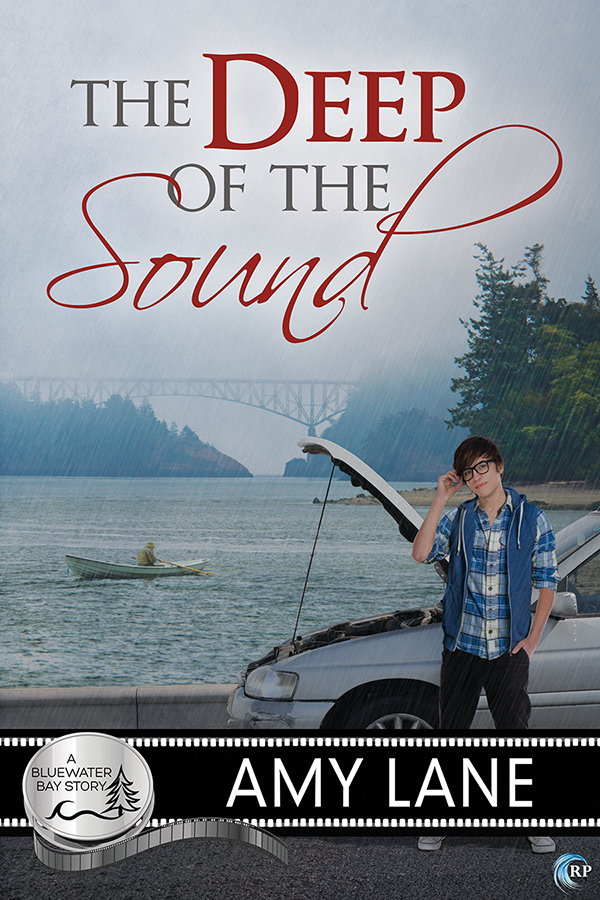 Cal McCorkle has lived in Bluewater Bay his whole life. He works two jobs to support a brother with a laundry list of psychiatric diagnoses and a great-uncle with Alzheimer’s, and his personal life amounts to impersonal hookups with his boss. He’s got no time, no ambition, and no hope. All he has is family, and they’re killing him one responsibility at a time.

Avery Kennedy left Los Angeles, his family, and his sleazy boyfriend to attend a Wolf’s Landing convention, and he has no plans to return. But when he finds himself broke and car-less in Bluewater Bay, he’s worried he’ll have to slink home with his tail between his legs. Then Cal McCorkle rides to his rescue, and his urge to run away dies a quick death.

Avery may seem helpless at first, but he can charm Cal’s fractious brother, so Cal can pretty much forgive him anything. Even being adorkable. And giving him hope. But Cal can only promise Avery “until we can’t”—and the cost of changing that to “until forever” might be too high, however much they both want it.


Every comment on this blog tour enters you in a drawing for an eBook package of all of Amy Lane's backlist titles with Riptide! (Excludes The Deep of the Sound and anthologies.) Entries close at midnight, Eastern time, on June 20, 2015. Contest is NOT restricted to U.S. entries. Don’t forget to add your email so we can contact you if you win!

The Deep of the Sound by Amy Lane

This is one of the best stories I've read in a long time. I absolutely loved it. The Deep of the Sound has all the feels that make a truly wonderful novel.

Avery is the nerdy type. His past experience is with boyfriends that are good-looking users. He and they feel that he is dating above his league so he gives too much and receives too little. His parents don't take him seriously either. He has no one in his corner telling him to reach for the stars. Instead they're all telling him what they want from him.

Cal's future is dim at best. He barely has a moment to take a breath. He lives paycheck to paycheck, working himself to the bone, in order to keep his family trio together. Both his uncle and his little brother have mental health issues so he also has no actual interaction with peers, no stimulating conversation, no close friendships. He has become hardened in order to get by.

I adore both of these men. They are deep down in the soul kind. Witnessing two beautiful people in a relationship is heartwarming. They overcome so many obstacles and have so much love to give.

Nothing stands out to me that I didn't like in this read. Several things stand out that I did appreciate. It's nice to see real life issues for regular people. Being a caretaker to someone with mental health issues can be a horrible burden to bear. Finding the courage to strike out on your own instead of staying where it's safe but you're unhappy is brave. Also, everyone can't be knockout gorgeous all the time. Everything can't always be about the orgasms. BTW, it does have great sex scenes, but there is a lot more to the book than just that. I totally fell for this couple. Reading their story made me feel good about the world.