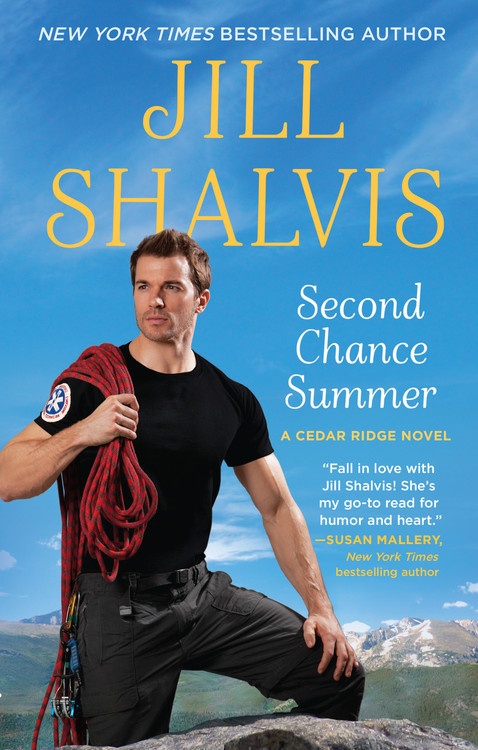 Cedar Ridge, Colorado, is famous for crisp mountain air, clear blue skies, and pine-scented breezes. And it's the last place Lily Danville wants to be. But she needs a job, and there's an opening at the hottest resort in her hometown. What has her concerned is the other hot property in Cedar Ridge: Aidan Kincaid-firefighter, rescue worker, and heartbreaker. She never could resist that devastating smile . . .

The Kincaid brothers are as rough and rugged as the Rocky Mountains they call home. Aidan has always done things his own way, by his own rules. And never has he regretted anything more than letting Lily walk out of his life ten years ago. If anyone has ever been in need of rescuing, she has. What she needs more than anything are long hikes, slow dances, and sizzling kisses. But that can only happen if he can get her to give Cedar Ridge-and this bad boy-a second chance . . .

“How did you fall?” he asked.
“Backward. Fast,” she quipped, not about to admit she’d been startled by a bunny. A baby bunny.
“Smartass.” He began to check her over. As in he put his hands all over her and ran them over her body. “You’re bleeding,” he said.
“I’ll buy you new sheets.”
“Shut up.” He frowned at her wrist and found another problem at her ankle, all while she attempted to keep her T-shirt covering as much as of her as possible.
Then he pointed to her shirt. “Lose it.”
“Bite me.”
“Later,” he said. “I want to see your ribs.”
“How about my foot up your ass?”
He met her gaze, his own stubborn and unbending. “Me or a doctor, Lily.”
He’d do it too, she had no doubt. He’d drag her kicking and screaming out of here if need be. So she sighed and very carefully lifted the T-shirt to just beneath her breasts. “See? I’m fine—”
She broke off, the air backing up in her lungs when he ran his hands very lightly over her ribcage, stopping when she managed to suck in a breath.
“Bruised, not broken I don’t think,” he said, his voice quiet and calm and clinically dispassionate, in direct opposition to his eyes. “Turn over.”
She bit out a harsh laugh. “Yeah, that’s going to happen nev—”
He rolled her over and pinned her there with a hand low on her back.
She sputtered and fought him, but then went utterly still when he ran his fingers up the back of one thigh, scooping the edge of her boy cut panties up a cheek.
“Also bruised,” he said.
“That’s where I landed. No worries, I’m padded nicely.”
“Nicely is right,” he said, and he removed his hands from her.
She leapt off the bed, tugged down her shirt, and had to tighten her lips not to whimper at the fast movement. “Okay, thanks. Be sure to lock the door on your way—”
“Did you hit your head or lose consciousness at any time?”
“No!” She didn’t want to need his help, wanted to lick her wounds in private rather than get turned on by his gentle touch. But she was stupid light-headed from getting up too fast and knew she wasn’t in the greatest shape.
And must as she didn’t want to like it, she did like how he always seemed to be there for her, even if her brain kept telling her heart she didn’t want him to be.
He still wasn’t leaving. “Tell me what really happened.”
“I loaded up some wood and was making my way up the stairs when”—she broke off and grimaced —“something popped out of the wood. I nearly had heart failure and fell down the stairs. The end.”
He never took his eyes off of her. “What popped out at you?”
“A spider,” she said, because hey, that could’ve totally happened. Just because she’d freaked out over the baby bunny didn’t mean that there wasn’t also a spider. Maybe she’d been so busy falling down the stairs she just hadn’t seen the spider.
“A spider made you fall down the stairs?” he asked in disbelief.
“A big one.” She lifted her hands so that they were about a foot apart.
His lips twitched.
Her hands spread apart even wider. “It might have been a mutant spider.”
“Or a baby bunny,” he said.
She stared at him while he grinned wide.
“You knew the whole time,” she accused.
“Yep. Lenny told me.”
“Well isn’t that just like a man,” she said in disgust.
Aidan tipped his head back and laughed out loud.
“Fine. Whatever,” she said. “I’m taking a shower. Alone.”
“Make it lukewarm, not hot,” he said. “I’m going to the truck for my first aid kit.”
“Aidan, I’m so not in the mood to play doctor.”
“Good,” he said. “I’ll play doctor and you play the nice, sweet, passive patient.” 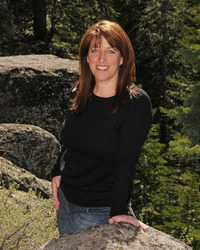 New York Times and USA Today bestselling author Jill Shalvis lives in a small town in the Sierras full of quirky characters. Any resemblance to the quirky characters in her books is, um, mostly coincidental. Look for Jill’s sexy contemporary and award-winning books wherever romances are sold and click on the blog button above for a complete book list and daily blog detailing her city-girl-living-in-the-mountains adventures.
Twitter   Facebook   Goodreads   Instagram   Tumblr   Pinterest

This is a story of a second chance at romance just as the title implies. Lily and Aidan had a thing for each other growing up. Tragedies happened which moved things like crushes to the back burner. Now after continuing hardships for both, Lily has come back to town, and there is no denying the sparks are ever present.

For me, the best part of the book is all the banter and chemistry between all the people in Cedar Ridge. They all know each other. The conversations between Lily and her friends and others at her job were interesting. Aidan and all the playing around with his coworkers and siblings made me smile. The silly things the characters did (the underwear, the wood pile). I actually enjoyed all of these friendship elements way more than the romance aspects of the book. I really liked everyone and felt like part of the crew.

Near the end of the book, things get really exciting with Aidan's job. During the story there are small rescues and remembrances of deaths, but it's made more real when the reader gets a ringside seat to a scary situation.

If you like down to earth good people and hot sexy rescue squad men, this is probably a great book for you. I'm looking forward to the next installment of the series.