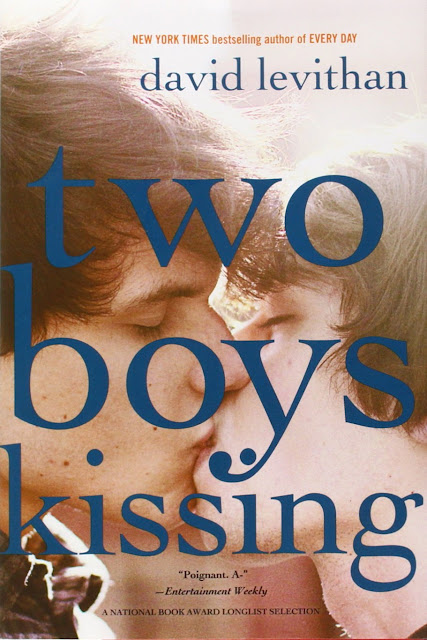 New York Times  bestselling author David Levithan tells the based-on-true-events story of Harry and Craig, two 17-year-olds who are about to take part in a 32-hour marathon of kissing to set a new Guinness World Record—all of which is narrated by a Greek Chorus of the generation of gay men lost to AIDS.

While the two increasingly dehydrated and sleep-deprived boys are locking lips, they become a focal point in the lives of other teen boys dealing with languishing long-term relationships, coming out, navigating gender identity, and falling deeper into the digital rabbit hole of gay hookup sites—all while the kissing former couple tries to figure out their own feelings for each other.

For more information go to
http://davidlevithan.com/two-boys-kissing-2/

This is an amazing inside look at the struggles of being gay in the past and present. The narrator is the collective voice of the gay generation during the AIDS epidemic. The storyline follows a cast of several gay teens in different walks of life during the age of the internet.

I don't know what it says about me. Maybe I'm not as knowledgable as I thought I was. I consider myself to be a supporter, but I've never thought about things from some of the angles which this book gave me. It was really eye opening. I can see how helpful it would be for a gay teen having a hard time and beneficial to their families. Really, I think it is required reading for everyone.

Two Boys Kissing takes everything to a personal level. The author really puts the reader inside the minds of the characters. It made me feel sad and hopeful at the same time. Remarkable writing. Thank you to the author for giving me a life lesson. This is a book that will stay with me.