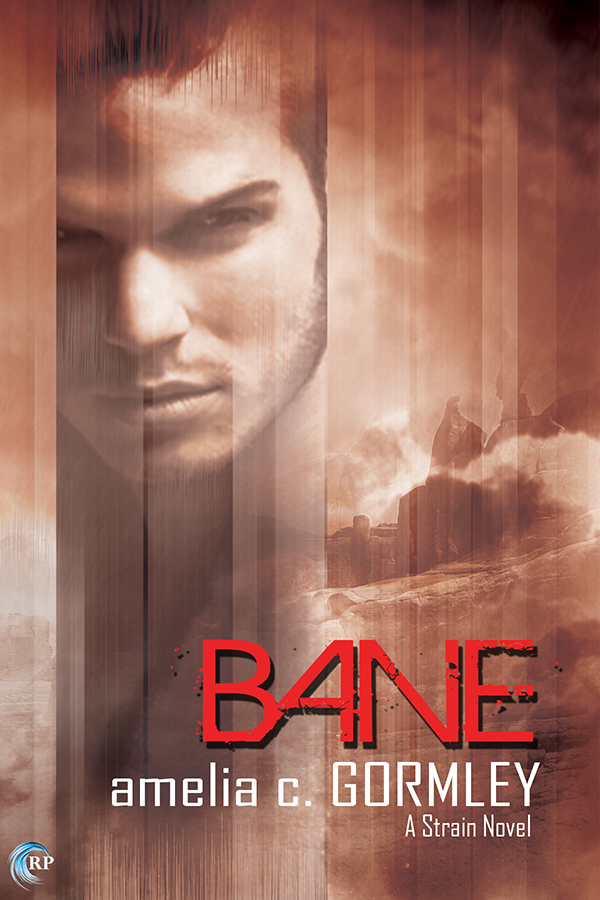 The weapon that nearly destroyed humanity may be their only salvation.

Rhys Cooper’s unique immunity to all three strains of the virus that nearly annihilated humanity has brought him the unwanted attention of Clean Zone scientists. They’ve summoned him for testing—ostensibly in the hopes of finding a vaccine—but Rhys’s partner, Darius Murrell, has good reason not to trust any government. He and his comrades in Delta Company were unwitting test subjects for Project Juggernaut, the military experiment that gave them superhuman abilities and unleashed the pandemic. Doubting the government’s intentions, Delta Company refuses to let Rhys go alone.

Fear of infection has kept Zach Houtman and his lover Nico Fernández apart for a decade. They meet rarely, just long enough to coordinate their spying on the head of the government’s virus research division. Secretary Littlewood is a vicious predator, and they suspect he’s trying to acquire the strain of the virus that would make him superhuman. To stop him, they need the perfect bait: Rhys.

For Rhys, helping them might cost him his relationship with Darius—or his life. For Zach and Nico, even if their plan succeeds, they still face the ultimate question: can infected and uninfected people ever live together safely?


Hi, and welcome to the Bane blog tour!

I don’t think it’s any secret that a lot of readers, in the wake of reading Strain, wanted more of Darius and Rhys. Already by that point I was brainstorming the pre- and peri-apocalyptic story that would become Juggernaut, but the further along I got on that, the more I realized the situation Zach and Nico were in couldn’t be resolved in the timeframe of Juggernaut. They needed developments that would only make sense to happen after the events of Strain. The plot also required Rhys to have matured a great deal since the end of Strain. Altogether, it gave me a beautiful opportunity to bring closure and an HEA ending (or at least as close to one as you get at the end of the world) for both sets of protagonists.

Thus we have Bane.

Over the course of the Bane blog tour, I’ll be sharing a free post-Bane short story, Refuge. How far post-Bane? Well, you’ll have to read and see. Some developments that happen in Bane are referenced, but not in any great detail, which means the reader should only encounter a few very broad, non-specific spoilers. Obviously, though, it will be best enjoyed if you’ve read Bane already (and Bane, of course, is best enjoyed after Juggernaut and Strain.)

Refuge introduces us to three new characters, Kal, Billie, and perhaps my favorite, Zeus. It’s a completely sex-free story, so you’re safe reading it at work. If my nebulous thoughts on how to continue the Strain universe ever take shape, it’s very possible a lot of material in this short story will be folded into a larger plot with Kal and Billie as the protagonists, and if that happens, you’ll find the smut there.

Each day, at least one stop on the blog tour will contain a section of the story. These segments may end or begin a little abruptly or clumsily at times, as I tried to split them in such a way that no one section would be to long and cumbersome for a single stop on the blog tour. In its linear form, it would simply be a five chapter story. By the end of the tour, all the sections will have been posted. If you need to catch up, you can check out the blog tour page (linked above), or my website, or the “Extras” tab on the Bane product page at Riptide for sequential links to all the posts.

Anyone who follows along on the tour will qualify to win store credit at Riptide. To enter the drawing, leave a comment on this post including a way to contact you (email, Twitter, or Facebook.) Each stop along the blog tour that you visit offers you another chance to enter. Be sure to check the Riptide blog tour schedule for a complete list of other stops. The contest will close 9/26/15. Any entries made without a way to contact the winner will be invalidated, so please don’t forget to provide your email, or your Twitter or Facebook address.

*Author’s Note: Refuge is completely unedited and un-proofed. What you’re seeing here is essentially a first draft, and like any first draft, it often may be clumsy to read or contain extraneous world-building and info-dumping that would be trimmed and streamlined during the editing process. Actually, I kind of like sharing it with you this way, if for no other reason than to allow readers to see just how much world-building happens behind the scenes and in my head, but doesn’t ever actually make it onto the page.

And of course, there will be typos. Oh so many typos.

“Take you back where?”
Billie would have narrowed her eyes at the stranger if she’d had the energy to move her eyelids. “The Clean Zone. If you have, you ought to know the rations I stole are already gone.”
Kal’s mouth opened, then understanding lit his eyes and he nodded slowly. “Ahhh. You’re from the Zone.”
Fear clawed at her chest, and the dog jumped up with a yelp and scrambled out of their cocoon as he picked up on her tension. “Oh, no. Oh, God. You’re not from the Clean Zone. You’re one of the Juggernauts.”
She tried to throw off the blankets, but her arms were heavy and uncoordinated. One of them swept dangerously close to the fire and Kal leapt to his feet, pushing it back. No part of her body seemed to want to move, at least not in the direction she meant for it to go. Rather than extricating herself, she just became more firmly tangled.
“Hey, relax!” Kal said, catching hold of her. “I’m not a Jug. I mean, my moms are, but I’m second generation.”
She tried to kick at him but only succeeded in toppling herself over with him on top of her, pinning her under the blankets. The fight abandoned her in a single breath. It was hopeless. She’d never be able to fight him off.
He made a disgusted noise. “Guess I don’t need to guess what sort of bullshit people in the Zone are telling themselves about us these days.” His weight disappeared and when she got the blankets off her face, he stood back, his arms spread as though to prove to her he was harmless. “You want to go, honey, feel free, but I wouldn’t lay odds on your chances for survival.”
“Right,” she muttered resentfully. “That what you tell all your new slaves?”
“Slaves?” He gave her an incredulous look. “What the fuck? Charlie Company was gone ten years before I was even born.”
“We know what you did with all the people you managed to convince to leave the Clean Zone!” she spat.
He rolled his eyes. “I’m pretty sure what you ‘know’ has less in common with reality than I have in common with a fish. Now would you settle down and let me wrap you up again before you die of hypothermia? I’m an anthropologist, not a medic. I can handle basic survival stuff, but if you get badly sick I’m not going to know what to do to help you.”
Despair thrummed in her chest as she sat mutely and let him bundle her up with the dog again. The dog’s presence felt affectionate, though for all she knew, its function was to sniff out and track down people they could take back to the Clean Zone. Nonetheless, she found herself delving her trembling fingers into its long fur and using its softness to comfort herself.
“Thank you,” Kal said once he was done, as if she’d done him a favor by sitting still. “I can’t really make you believe me when I tell you I don’t plan to make you do anything you don’t want to do, so I’ll offer you this: when you’re warmer and have gotten some rest, if you want to go on your way, you can. I’ll even let you take most of my supplies since I’ve probably got more experience taking care of myself out here than you do.” He quirked an eyebrow at her, daring her to contest that claim. Which she really couldn’t do, since she hadn’t even known enough to avoid that damned house.
When she didn’t argue, he continued, “Or, if you want, I’ll help you find shelter, someplace you can hole up until spring since you probably won’t get far before winter sets in. I’ll even help you lay away provisions. Only thing is, if I take time to do that, you’ll probably end up having to share them with me because there’s no way I’ll be able to make it across the mountains. Then my moms and half of Delta Company will kick my ass for worrying them once I do make it back. Really, it’s probably better for both of us if you just come with me.”

Amelia C. Gormley published her first short story in the school newspaper in the 4thgrade, and since then has suffered the persistent delusion that enabling other people to hear the voices in her head might be a worthwhile endeavor. She’s even convinced her hapless spouse that it could be a lucrative one as well, especially when coupled with her real-life interest in angst, kink, social justice issues, and pretty men.

When her husband and son aren’t interacting with the back of her head as she stares at the computer, they rely on her to feed them, maintain their domicile, and keep some semblance of order in their lives (all very, very bad ideas—they really should know better by now.) She can also be found playing video games and ranting on Tumblr, seeing as how she’s one of those horrid social justice warriors out to destroy free speech, gaming, geek culture, and everything else that’s fun everywhere.

You can find her self-published Impulse trilogy almost anywhere ebooks are sold, and check out her catalog of Riptide Publishing releases at their website.

Bane does an excellent job of tying up the Strain series. Separate storylines of characters from both of the previous books merge. The reader has witnessed the beginning and evolution of this pandemic. Now, the goal is to find a solution to combat this plague that would allow coexistence between all surviving members of the human race.

I like how there are different strains of the virus presented. It seems more realistic because diseases do mutate and adapt. Also, a tragedy of this magnitude is sure to bring out the best and worst in people. Nothing ever comes easily. It's a constant fight just to stay afloat.

The action and romance are great. The struggle is real. Elements of chance, karma, fate, luck, destiny, politics, religion, revenge, sacrifice and love are present. The mix of everything together keeps it interesting, and the end is satisfying.

I love this series and will look for more from this author.