The Complications of T by Bey Deckard Review 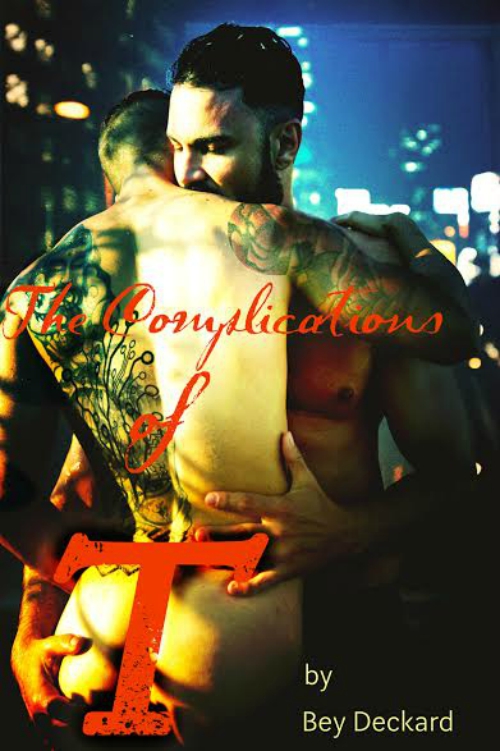 Stuart Leandro knows he’s washed up, both on the big screen, and in his marriage. Then, when things take an even bigger turn for the worse one night, he winds up blind drunk and lost in a foreign city.

Thankfully, someone’s there to rescue him before his face ends up plastered all over the tabloids.

Wary of the motives of the reclusive stranger who brings the fading star into the quiet shelter of a hip but isolated loft, Stuart nonetheless can't deny his curiosity… Or his attraction. Tim is unlike anyone the actor has ever met, but underneath the mystery and quiet attempts at invisibility, Stuart discovers someone whose life has been intertwined with his own for years.

Neither could have predicted that Tim's act of kindness would lead to one of the most intense encounters of their lives—but, are they willing to weather the media storm their extraordinary relationship will cause?

Buy it now:
Amazon
ARe
Smashwords

This book is a bit of a departure from my norm (though what is my norm... really?).

It's sweet—which is not to say what I've written before isn't sweet—but this story is sweet in a more traditional sense.

And it's a contemporary book—my first one.

I consider it a reaction on my part to the other book I'm currently writing. It seems that I needed a little break from the darkness... so I wrote something about hope.

The Complications of T by Bey Deckard

First, I just want to say this cover is gorgeous.

Stuart is lost. Life just isn't panning out quite liked he'd hoped. When he's at a really low point, someone that he totally isn't expecting helps him reevaluate what will make him happy.

Tim is transgender, and although it's easy to focus on him, for me the story is more about Stuart. As far as I know, Stuart has only been attracted to straight women so everything is a new experience for him. Some aspects of the relationship between them were pretty new to me as well; so, I went through the learning process with him.

I'm a fairly open-minded person, but this story made me think about things that I hadn't before. I appreciate that. I also like the fact that the author stepped outside the box that I had unknowingly put him in. I can't wait to see what he comes up with next. ♡