Out of Plans by Stylo Fantôme Release Week Event Review

Release week event for Stylo's OUT OF PLANS, the much anticipated sequel to Best Laid Plans #RunningOutOfTime 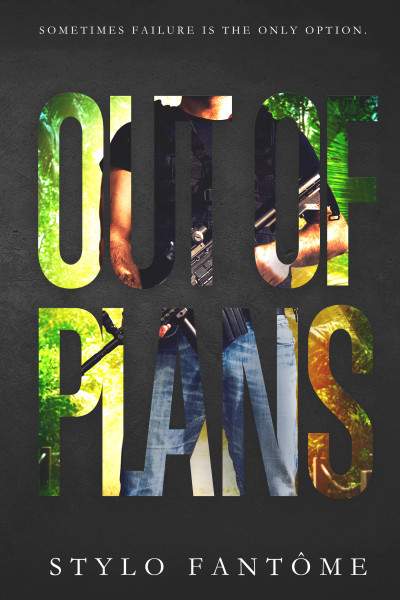 THE new PLAN:
* Find Marc
* Don't find Marc
* Take down a Russian Bratva boss
* Don't have sex with Kingsley
* Find Marc
* Take down a Colombian drug lord
* Don't fall for Marc again
* DON'T FIND MARC
* Kill every -
*
*
* SCREW THE PLAN AND JUST WING IT
This is the story of what happens when best laid plans fail, and a vengeful woman is forced to find her own way once again. A bond broken, trust shattered, and too many lies to keep track of find Marc and Lily all out of plans and running out of time. Can they find their way back to each other before trouble finds them first, or is it really the end of their journey?
If this NOVEL were a MOVIE, it would have an R rating from the MPAA. Contains: Violence, Grisly Images, Strong Language, Nudity, and Graphic Sexual Content.

Shock wasn't a big enough word to describe how Lily felt, looking up to find Marc staring at her in that ballroom. Anyone else. It literally could have been anyone else – her father, Mickey Mouse, Hitler, and she would've been less surprised. Marcelle De Sant wasn't real, anymore. He was a figment of her imagination, something that usually only appeared late at night, when she was alone and missing a more dangerous time in her life. Besides, wasn't he supposed to be in Brazil!? Wasn't he ... anywhere she wasn't? Wasn't he not quite this good looking!? It's unfair that such a dick can be so good looking. Dancing with her was bad enough. They'd fought, as had always been in their nature, but it wasn't the same. She hated him. He'd lied to her, and he'd manipulated her, and he'd abandoned her. Told her she wasn't good enough, then told her to go home. She loathed him. And yet, his arm was around her, and his eyes were so blue, and she'd missed him so much. Rat bastard. And of course, along with fighting, their other old friend made an appearance – bad luck. Next thing Lily had known, she was being dragged upstairs and shoved into a bedroom. There was arguing. There was kissing. So really, it was just like old times. The bedroom door swung open, but she barely registered it. Marc's hands were moving over her body, pressing down on her breasts. He moved one lower, sliding it over her hip and around to her ass, pulling her away from the wall and into himself. She ran her hands down his chest and worked them under his jacket, smoothing around to his back. She bit into his bottom lip and that earned her yet another groan, followed by his tongue filling her mouth. Acting a part, acting a part. Not enjoying this at all. Nope, nooooope. People were in the room. Someone was barking questions in Spanish. Marc ignored them, and the hand on her ass suddenly moved and grabbed her thigh, yanking her leg up to his hip. She made a big show of pulling his belt apart, all while his mouth moved down her neck, leaving sloppy wet kisses in its wake. His hands were back at her chest and buttons flew as he yanked open her blouse. One hand went down the top of her tank, and suddenly Lily didn't care that they had an audience. Marc was touching her again, that was all that mattered. “Excuse me!” a voice barked out. “You cannot be in here. You go now.” Marc's free hand began rooting around in his pocket, and he pulled out a handful of pesos. He held them out to the nearest guard. “We go in twenty minutes,” he panted, shoving the money into an open hand. “Twenty minutes? Jesus, that's disappointing,” she gave a husky laugh, then moaned when the hand on her breast squeezed. “Alright. Twenty minutes. We come back, and you leave room,” they were warned. But neither of them could answer, as their mouths met again and their tongues moved against each other. Her mind had registered the length of time since he'd left her, but her body didn't notice it at all. It recognized his touch as if they'd been together just the day before; like no time had passed. It made it all even worse. Her brain had done a good job of pretending it was over him. But her body had longed for him for six months. Had missed him. Hadn't understood why he'd left. That thought brought her to her senses, and Lily abruptly shoved him away. They were both breathing hard. Marc's pants were undone and Lily's blouse was hanging open. Her matte red lipstick was smeared across his mouth and chin. She took a deep breath and smoothed her hands over her hips. “Okay, we need to figure this out, right now,” she told him. “Alright,” he agreed, though he seemed a little dazed. She resisted the urge to smirk. “I didn't come here for you. Nothing I've done in the last six months has been for you,” she lied. “You're not a part of this. You were never a part of this, except for a couple weeks in Africa. I will not let you ruin this for me again, De Sant. When we walk out of this room, you're going to leave the house, and I'm going to finish this job.” Marc's daze wore off and he glared as he put his pants back to rights. “I've been a part of this since the moment you opened that safe, and you know it. What do you think I've been doing this whole time? Fucking vacationing? I'm not exactly getting paid for this shit.” “No one asked you to do any of this shit. You just took it upon yourself. You just ran away and decided to solve a problem that wasn't even any of your business.” He flinched and Lily smiled. “I thought you'd understand,” he grumbled, glancing in a mirror that was behind her. He yanked off his bow tie and used it to wipe at lipstick around his mouth. “Then you thought wrong.”

Crazy woman living in an undisclosed location in Alaska (where the need for a creative mind is a necessity!), I have been writing since ..., forever? Yeah, that sounds about right. I have been told that I remind people of Lucille Ball - I also see shades of Jennifer Saunders, and Denis Leary. So basically, I laugh a lot, I'm clumsy a lot, and I say the F-word A LOT.
I like dogs more than I like most people, and I don't trust anyone who doesn't drink. No, I do not live in an igloo, and no, the sun does not set for six months out of the year, there's your Alaska lesson for the day. I have mermaid hair - both a curse and a blessing - and most of the time I talk so fast, even I can't understand me.
Yeah. I think that about sums me up.
Facebook | Twitter | Goodreads | Amazon Author Page | Instagram 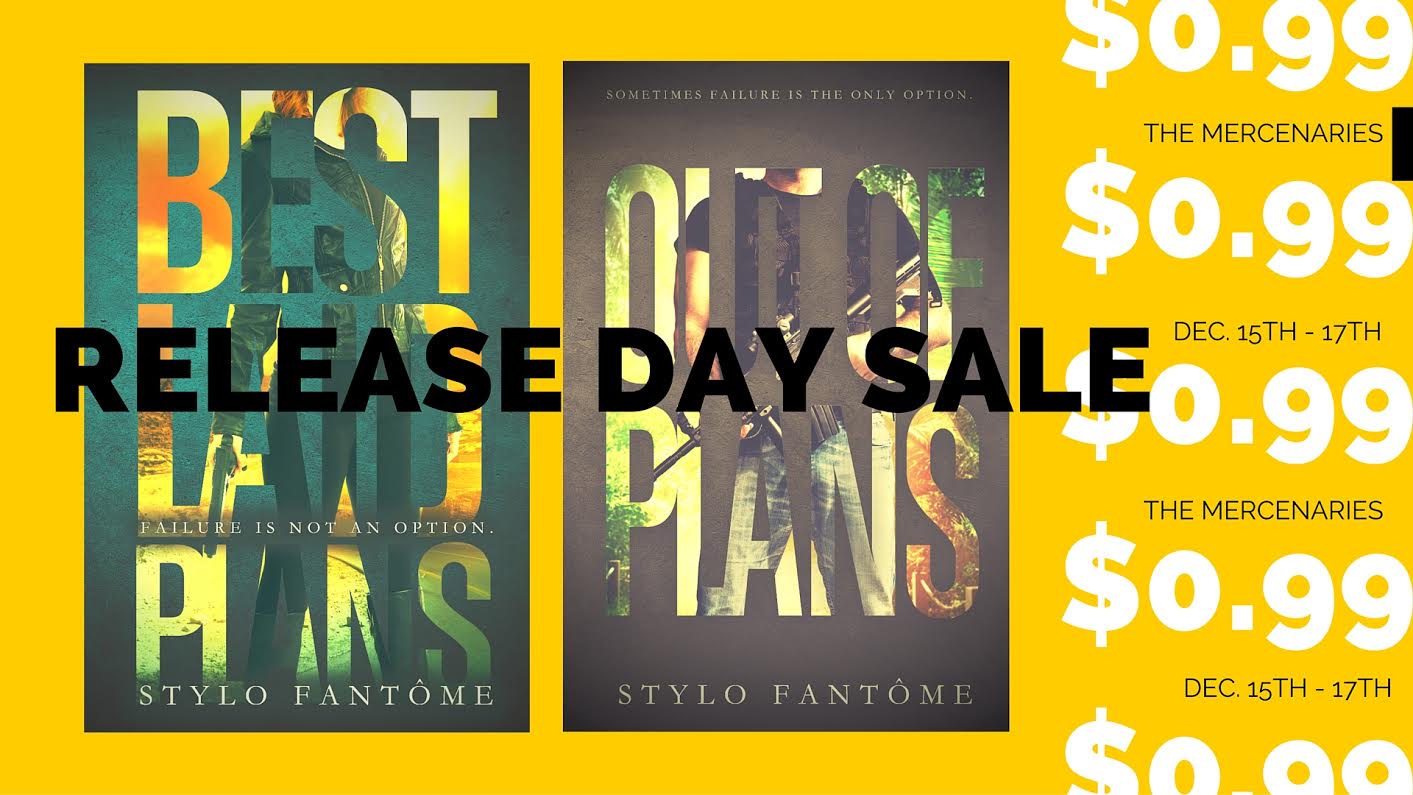 Out of Plans by Stylo Fantome

I loved the first book and wondered if this one would measure up. Of course it does!

Lily undergoes a bit of a transformation between when we saw her last and who she is now. She was absolutely a lot tougher than I will ever be, but she was no where near able to pull off the task she set out to do. She spends several months doing nothing but training and comes out the other side on a whole new level. I like how she still has her moments of doubt and the capability of showing heart despite her rougher exterior.

Kingsley is the person she seeks out for help. He has major combat skills. Before this point, I only knew him for the cool outward persona he gave. After getting to know him a little better, I see he has hidden layers including all the pain he's in. Lily is like a balm for his soul, in my opinion. I really hope to see more of him in a future book.

Marc has never gotten over Lily. He left her in hopes of protecting her from the lifestyle, and now he's taken up her fight as his own. His emotional growth path is just as deep as the changes Lily and Kingsley are going through. Marc has to accept things for what they are. He looses a little of his alpha broodiness while still retaining his warrior prowess.

There's a bit of building up and information giving in the beginning, but after the action really gets started, it doesn't stop. These three are on a mission and set to go at all times. I would truly love to see it all played out in film. I don't know how the author came of with some of the scenes. They will definitely keep the reader on the edge of their seat. Although everything is as explosive as any action movie I've seen, it's delivered in a believable, fact-checked kind of way. The characters are all total badasses with amazing expertise, but they aren't immortals. They bleed and hurt, and they can only use what is available to them.

Marc, Lily and Kingsley are very damaged people who push all of their hurts into being powerful. Individually they are awesome, but together they are a formidable sight to behold.

This novel is an instant favorite for me and a must read in my opinion.