The Unfortunate Decisions of Dahlia Moss by Max Wirestone Review 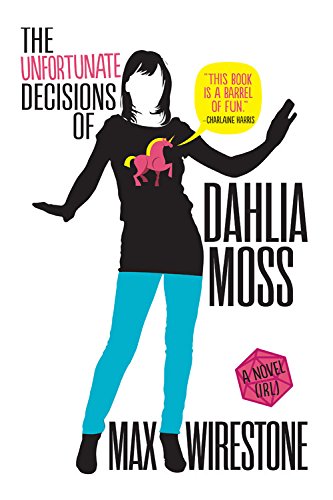 For fans of The Guild, New Girl, Scott Pilgrim, Big Bang Theory, Veronica Mars, or anyone who has ever geeked out about something.

The odds of Dahlia successfully navigating adulthood are 3,720 to 1. But never tell her the odds.

Meet Dahlia Moss, the reigning queen of unfortunate decision-making in the St. Louis area. Unemployed broke, and on her last bowl of ramen, she's not living her best life. But that's all about to change.

Before Dahlia can make her life any messier on her own she's offered a job. A job that she's woefully under-qualified for. A job that will lead her to a murder, an MMORPG, and possibly a fella (or two?).

Turns out unfortunate decisions abound, and she's just the girl to deal with them.

The Unfortunate Decisions of Dahlia Moss by Max Wirestone

This book is pure enjoyment and fun. The writing is smart and colorful with a storyline of equal measures geek and mystery.

Dahlia has been on a long unemployment streak, when a job falls into her lap. Originally hired to solve an online gaming issue between teammates, she soon gets wrapped up in a murder investigation. Some of the plot happens inside a multiplayer elaborate online gaming world. Some happens in her real world. She's totally relatable and free with the humor always. Even though someone is killed, it's pretty light-hearted with cosplay events, dumpster diving and just general everyday wackiness. Sometimes the pace heats up as with a shoot out that seems to blend as a LARP, but by the end, it does give a serious message of just getting out and living.

I can definitely see The Unfortunate Decisions of Dahlia Moss being turned into a movie. I don't read a lot of books that are so full of quirky bits, pop culture, and geek references. It was exactly what I needed—totally delightful, and I will be looking for more from this author.