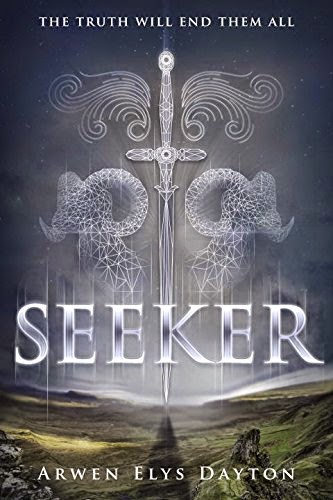 The Truth Will End Them All

“[A] powerful beginning to a complex family saga…Dayton excels at creating memorable characters, among them Maud, the “Young Dread,” an ageless child whose mysterious clan is linked to the Seekers.”
Publishers Weekly

The night Quin Kincaid takes her Oath, she will become what she has trained to be her entire life. She will become a Seeker. This is her legacy, and it is an honor.
As a Seeker, Quin will fight beside her two closest companions, Shinobu and John, to protect the weak and the wronged. Together they will stand for light in a shadowy world.
And she’ll be with the boy she loves–who’s also her best friend. But the night Quin takes her Oath, everything changes.
Being a Seeker is not what she thought. Her family is not what she thought. Even the boy she loves is not who she thought. And now it’s too late to walk away.

“A tightly-woven, action-packed story of survival and adventure, Seeker is perfect for fans of Game of Thrones.”
Tahereh Mafi, author of New York Times
bestselling Shatter Me series

Arwen Elys Dayton spends months doing research for her stories. Her explorations have taken her around the world to places like the Great Pyramid (which she explored by a single fading flashlight when researching Resurrection), Hong Kong and its many islands, and lots of ruined castles in Scotland. She enjoys creating complete worlds inhabited by characters who charm, frustrate or inspire.
Arwen lives with her husband and their three children on the West Coast of the United States. You can follow her @arwenelysdayton on Twitter and Instagram, or reach her by email at arwenelysdayton@gmail.com.

This story starts with a generation of 3 teens training to become the next Seekers and eventually paying for the paths their parents have chosen. As the story progresses we see that there are different houses or families in competition to be the leader, to possess certain weapons and writings.

Dimensions and time elements have no hold on the characters. They go through different periods. Seeker has a lot of action. Bullet time is a real thing within it. I would categorize it as epic fantasy sci-fi with a hint of steampunk.

This book has so much information. You really, really have to focus not to miss what is happening. You start thinking one way about someone or something then previously unknown information is given that changes things up. Who's bad? Who's good? Can there be a good outcome with so much bad blood?

I would recommend this book for someone that likes to see strange new weapons and figure out mysteries that aren't spoon-fed to the reader.