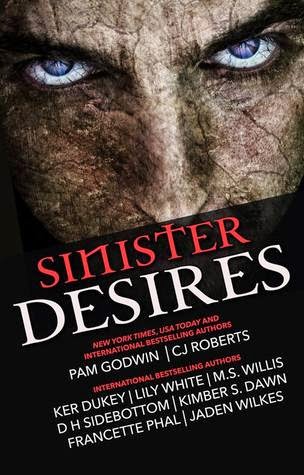 Tired of hearts & flowers? Does the sight of teddy bears make you want to throw up in your mouth? Like your erotica as dark as your soul and just as twisted?Indulge your SINISTER DESIRES with these ten delectable tales of forbidden fancy from previously banned authors.Limited Time: February 2015A percentage of the proceeds from this anthology will go towards combating censorship in publishing. We will not go gently!WARNING: Anticipate that ALL books in this antho contain VERY disturbing situations, dubious consent, rape, strong language, and graphic violence.SINISTER DESIRES includes:Beneath the Burn by Pam GodwinAmid corruption and power, rock stars and drugs, Jay and Charlee must face their worst fears. When the battle is over, what will be left...Beneath The Burn.Captive in the Dark by C.J. RobertsThis New York Times Bestseller is the story of a young woman kidnapped and held hostage by a human trafficker out for revenge. Gritty, violent, and not for the faint of heart. 18+Empathy by Ker DukeyBrother. Detective. Contract Killer. Blake is all three and the last thing he wants is...EMPATHY.Therapist by Jaden WilkesA handsome and charming sociopath meets his match in a femme fatale intent on destroying him from the inside out.The Decimation of Mae by D.H. SidebottomHe called me his lamb. He was the shepherd. As Master, he demanded my mind and surrender and used it to shatter my heart. His violence broke my spirit. His hatred slayed my soul.But it was his kind and gentle side that took my life? Literally.Joseph Fallen by M.S. WillisThere is a fine line between genius and madness, love and hate, right and wrong. Discover how Joseph falls from light into the pitch black depths of ultimate darkness.Roman by Kimber S. DawnRoman is a man of little words and lesser morals. Roman has never felt emotions like guilt, shame, or remorse. How do I know all of this? Because, my name is Heather Mackenzie and I've been number thirteen for a lot longer than I ever intended to be.Flawed by Francette PhalAll Lacey wants for herself is a better life. And she does all she can to work towards that goal. But one mistake brings her world to a crashing halt, redirecting her on the path to utter destruction. But it's a destruction she finds herself craving beneath the brutal hands of serial killer Knox Bishop.Facade by Ker Dukey & D.H. SidebottomI am, Star, and just like with some stars in the sky, the light you see is an echo, a facade, I am already gone. I am a no one. Especially to him. To him I am the dark in his desires, the corrupt in his depravity.The sin in his immorality.Her Master's Courtesan by Lily WhiteHe does not want love or kindness. He only wants complete submission. Erotic Horror.

I have not read all of the books, but here are my reviews for the ones that I have.

Captive in the Dark by C.J. Roberts

I read this book a long time ago, rated it 5 stars, but never reviewed it. Recently I did a reread and wanted to write some focusing on Caleb. I love Caleb, who is one of my top ten of all times in the book boyfriends department.

The first thing that stands out to me in the beginning is how much pleasure he derives just from watching her, before anything has even happened (as far as the Livvie/Caleb situation).

He was excited and instantly drawn to her. The reader feels suspended on the edge of their seat waiting to find out what will happen, how it will play out.

After her abduction, she still can't hate him even though she feels she should. While he is completely consumed with her, she is not immune. She dreams of him, a perfect angel.

Although he may look like heaven, he is equal parts heaven and hell.

-He was my tormentor and my solace; the creator of the dark and the light within.-

As more details of his past are provided, he becomes an even more complex character. He is so gorgeous and his been so tormented and is now fighting his desires, emotions, background, pain, fate, etc etc etc. I wanted to hold the little boy he once was and encourage the man he is that he could change his future.

The entire story is up then down, emotional wave after emotional wave, surprise, sexiness, ugliness, doom and hope. It just doesn't get much better.

FULL REVIEW CAN BE FOUND AT http://fangirlmomentsandmytwocents.bl...

Beneath the Burn by Pam Godwin

I loved the characters and the plot. There wasn't a dull moment. Sometimes a dark book just focuses on being dark. This book shows love and strength. Excellent on all accounts.

Wow. Brutal. Loved it. Glad I read book 1 first cause this was pretty devastating.

Lacey is a high school senior honor student. She comes from the trashiest of backgrounds. Her mother is a crack head/junkie/prostitute. Her brother is a low life user. How someone with so much fire came from such hopelessness is a mystery. In order to live, Lacey is also a prostitute. She has a small clientele of steady johns. Her goal is to save money for medical school, but her family is like a yoke around her neck constantly dragging her down and using her money.

I'm a deer in his headlights. There's no left or right for me. No up or down. No chance of looking away from the disaster that's about to happen to me.

Knox works for the Russian mob. He "takes care" of people the boss needs removed. Unlike most hit men, he doesn't do it for the money or the power—it's not a job, it's his passion, his life. Knox is a serial killer that gets to feed his hunger in a way that is useful to his boss. As far back as he can remember, he has never had any connection to another person or any emotion besides the desire to kill. He is indifferent to love, hate, happiness, sadness, fear... The name of this series is The Butcher so just imagine what you will.

He isn't sane. Not even a little bit. Everything he's done to me up to this point proves that.

Lacey, yet again trying to save her ungrateful family members, ends up indebted to Knox. There is something about her tenacity that intrigues him. She's like a puzzle that he needs to work out. How far can he push her before she breaks?

I think it might be a reflection of the sort of person he is on the inside. Beautiful, yet irredeemably evil.

This book is filled with unlikable characters. Lacey's mother and brother are of course on the list along with several minor assholes at her school. But the biggest bitch of all is Katia. I don't know when I have hated a book persona this much.

There are so many things I'm not even going into about title. It has some deep twists and turns. There are explanations, connections and surprises. These things need to be learned as you read so that you may get the full emotional blow.

For those looking for a dark read that is truly dark, not sort of, but the real deal, which also has an awesome storyline this is the book for you. Sometimes a book is labeled dark, and it isn't. This book is dark. Sometimes a dark book takes it too far and becomes a horror story. You end up not caring about the characters. That isn't the case here. I was totally into this book and the outcomes. I highly recommend it.

FULL REVIEW CAN BE FOUND AT http://fangirlmomentsandmytwocents.bl...

Her Master's Courtesan by Lily White

This one was actually too much for me.

So everyone keeps saying before a dark book that it isn't rainbows and fluff etc etc yada yada yada.  I cannot stress enough that this is a D-A-R-K read.

Unless you're a zombie, I'm assuming this is what's going on with you right now.

1st- Before you read this book, you should do this.

Just rip that sucker out cause you won't be needing it.

2nd- You need to know that it does contain rape, physical abuse, psychological abuse, slavery, and so on.  Everything is very detailed.

3rd- There are two types of truly dark reads.

One- the person is evil, and you know it.  You hate them from the beginning.  You aren't meant to have feelings for them.  It's a thriller, and they're the bad guy.

Two- the person is bad, but you still form a romantic attachment, even though you know it's f'd up.  The person somehow tricks you, wins you over despite what they may have done.  There's something about them that calls to you.

This book gives the appearance that the later will happen, but it's really the first type.

4th- The author's writing style is so good that you don't even see the twists coming.  I wish I would have paid better attention to the warnings from her about this book and prepared myself better.  That's why I'm warning you now.

I kept expecting things to go differently than they did.  Don't do this.  The fall will be hard enough without your mental false buildup.

5th- This story has no romance.  No moral.  It is simply DARK.

***ARC was given by author for an honest review***