A Girl's Guide to Life by Michelle Herman Review 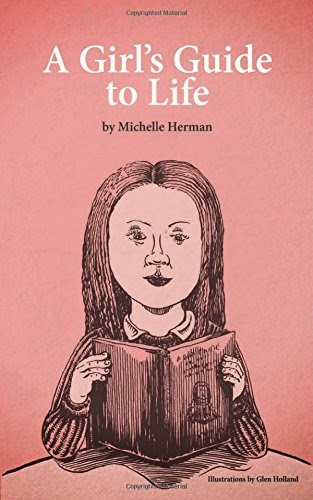 A Girl's Guide to Life is a timeless book of warm and sensible advice for young girls, originally written by a mother for her own eight-year-old daughter. From compassion and empathy through self-expression and creativity, from thoughtfulness and helpfulness and good deeds through gratitude and heartfelt apology, from the incomparable joys of friendship to the importance of learning how and when to say no, this little book offers wise counsel that will be of use for many years to come.

"A Girl's Guide to Life is exactly that -- a delightful guide filled with wisdom and warmth for all ages. It's about saying yes and saying no and everything in between, giving respect and expecting it too. Practical proverbs in a fun-to-read package."    -Dandi Daley Mackall

"Sensible, subtle, loving advice tells girls how to be brave and happy and to do right -- and that life is complicated. I'm rushing A Girl's Guide to my youngest granddaughter."      -Lore Segal

"Herman's book may help to ease readers into their teenage years, at a time when they want to be both independent and nurtured... A sweet book of advice for young girls.'
-Kirkus Reviews

The first draft of  this book, my first for children, was written in 2001, as a gift for my daughter, who was then eight and a half years old. I wrote it for her after we read Little Women together and she noted (or complained) that Marmee, the mother in the story, gave her daughters each a copy of a "guide to life."

"Why haven't you written a guide to life for me?" my daughter wanted to know. When I laughed and explained that the "guide to life" in Little Women was a religious tract, John Bunyan's Pilgrim's Progress,  she wasn't having any of it. She folded her arms and said, "Yes, well, that's because Marmee isn't a writer. So she couldn't write her own. But you could."

But until the Guide to Life I wrote for her surfaced again during a search of her bookshelves (she herself having decamped to college nearly two years before) for the first volume of Maud Hart Lovelace's wonderful Betsy-Tacy series to read with a seven-year-old friend, I had forgotten that I had ever written it. But there it was, neatly shelved alongside volumes of poetry and collections of plays: a homemade, crudely hand-stitched "book" (its author, who knows how to do a number of things, does not, unfortunately, know how to sew--but not knowing how to do something has never stopped her [that is, me] from trying to do it). I sat down on the floor of my daughter's room then and there and read it through--grateful and pleased and touched that she had kept it, and grateful and pleased and touched to learn subsequently, over emails and texts, that it had (and how and why it had) been helpful to her and her friends when they were children.

And so now I have published it, with the hope that it will be useful to other eight- and nine- and ten-year-olds (and perhaps girls a little young or a little older, too).

Michelle Herman, the director of the creative writing program at Ohio State University, is a novelist and essayist whose most recent book, Stories We Tell Ourselves, was longlisted for the 2014 PEN/Diamonstein-Spielvogel Award for the Art of the Essay. Her other books include The Middle of Everything: Memoirs of Motherhood, the novels Missing and Dog, the collection of novellas, A New and Glorious Life, and Like A Song, a new essay collection about singing, friendship, home, and family, to be published in 2015.

Born and raised in Brooklyn, New York, she has lived for many years in Columbus, Ohio, where she and her husband, the artist Glen Holland, raised their daughter Grace, who is now all grown up.

A Girl's Guide to Life by Michelle Herman

My rating is for the purpose of the information within, not the entertainment value for an adult.

I chose to read this book because I have a daughter at the age of the intended audience. This book does a great job of simplifying everything into terms for a kid. Also it uses examples that would be important to a child. If the author would have used adult issues, it probably would go over most little girls' heads because the situations wouldn't be something that they are concerned/troubled with in their day-to-day.

The organization of the sections wasn't the best in my opinion, but it probably won't matter to the chosen audience.

I believe my daughter would enjoy this book, and it would be beneficial for her.  I recommend parents with preteen girls check it out.