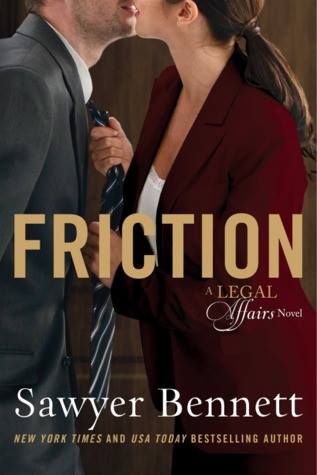 At the powerhouse law firm of Knight & Payne, winning comes first and ethics a distant second. Leary Michaels uses her female charms to daze opponents, and it’s always worked well—until now. On her most personal case yet, she finds herself going up against a defense attorney just as skilled, shameless, and seductive as she is.
Reeve Holloway has never met a woman as sure of her own sexuality, or as ruthless in wielding it, as Leary is. But he won’t be toyed with. What Leary starts, he’ll finish—in the courtroom, the bedroom, or any-damn-place he wants. The sex is uninhibited, electrifying, and absolutely against the rules. Reeve’s job is to ruin Leary’s case…even if it destroys her in the process and costs him the woman he’s come to love. 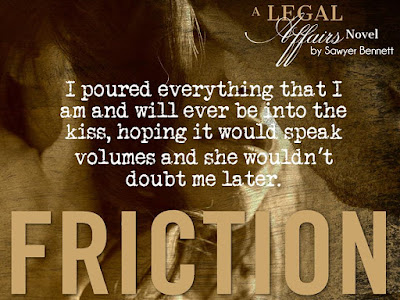 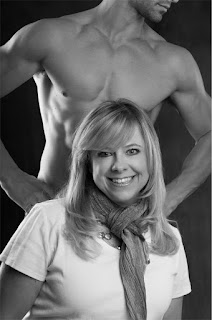 New York Times and USA Today Bestselling Author, Sawyer Bennett is a snarky southern woman and reformed trial lawyer who decided to finally start putting on paper all of the stories that were floating in her head. Her husband works for a Fortune 100 company which lets him fly all over the world while she stays at home with their daughter and three big, furry dogs who hog the bed. Sawyer would like to report she doesn't have many weaknesses but can be bribed with a nominal amount of milk chocolate.
Sawyer is the author of several contemporary romances including the popular Off Series, the Legal Affairs Series, the Last Call Series and the Carolina Cold Fury Hockey Series.

Friction is about two lawyers from different firms who are representing opposing sides to a case. Despite the ill timing, they can't hold back their attraction for each other.

Leary and Reeve knock it out of the park with their sexiness. They're both great lawyers also. Lots of issues arise like legality, ethics and heart. Lawyers must follow certain guidelines, and people in love tend to have different standards. Their business vs. personal relationship really is quite the moral dilemma.

The trial is interesting. I could definitely tell the author is knowledgable about the subject of law. Most of the steps are laid out which draws the reader into wanting a certain outcome. The sex is orgasmic. I got a 'Whew! Is it hot in here?' feeling while reading.