The last installment of Karen Stivali’s Moments in Time series, Moment of Clarity, has just been released. At the same time, the paperback Moments in Time that contains all three novellas in the series has also been published!

Spending the summer together on Fire Island brought Collin and Tanner closer than ever, but back in their conservative college town, challenges confront them at every turn.


As they search for their new normal in their old environment, Collin's brother Sean surprises them with help when they need it most. But when word about their relationship gets out, trouble erupts with friends and family. When Collin's relationship with Tanner becomes an issue in his brother's custody battle and Tanner struggles with his feelings for a heartbroken Wendy, Collin wonders if everyone he cares about would be better off without him in the picture.

In order to save them both, Tanner must make it clear to Collin that their love for each other is all that matters.

Between classes, my work at Gino’s, Tanner’s shifts at the bookstore, and commuting back and forth to Sean’s house, Tanner and I were busier than we’d ever been. I always knew it was more convenient to live on campus, but I had no idea what a hassle it was to make the added drive daily. By the time we got to Sean’s, had dinner, spent time with the girls, and did some studying, we were exhausted.


I hadn’t touched Tanner for yet another week, and I didn’t think I’d last the day without changing that. Tanner must have felt the same. I’d seen the looks he’d been throwing me, particularly the night before while we were watching a movie together, but I wasn’t about to do anything with Sean and the kids in the house. I didn’t care that the doors locked. It didn’t feel right. And I didn’t trust either of us to be quiet enough. Especially since it had been so long.


Sean handed me the last dirty dish to load into the dishwasher while Tanner put the juice and milk in the fridge.
“I’m gonna run to the grocery store while the kids are at preschool. Any requests?” Sean asked, grabbing his wallet off the counter and shoving it in his pocket.
“If you get a can of crushed tomatoes and some spaghetti, I’ll cook.”
“Thanks. The kids loved that the other night. Anything else?”
I tried to think but couldn’t. All that registered in my brain was that Sean was going out. Tanner and I would be alone in the house. My cock was totally onboard with this thought and already looking for an escape plan from my pants.
“I think that’ll do it. Tanner, you need anything?”
Tanner looked up from wiping off the kitchen tables. His pupils were huge. I knew that look. I loved that look. He was thinking the same thing I was. My cock twitched in anticipation.
“I’m good,” Tanner said, tossing the rag on the counter.
“Okay, then.” Sean headed for the door. “It’s my turn to drive carpool home, so I’ll probably take the kids to Mickey D’s for happy meals. Lock up if you both leave, okay?”
“Sure.” My heart raced as I watched Sean trot down the back porch steps. I held my breath, listening as the car door slammed, the engine revved, and the tires crunched down the gravel driveway.
I turned to look at Tanner, but before I could even focus my eyes, he was on me. Hands on either side of my face, body pressed up against mine, lips prying mine open, tongue—oh, God, I’d missed that tongue—swirling in circles with mine.
Groaning, I grabbed his ass and tugged him closer. I needed to feel as much of him as possible. All of him. Immediately, if not sooner.
EXCERPT TWO – MOMENT OF CLARITY – STIVALI
It took me four hours to finish writing my paper, probably in part because I kept stopping to check my phone. I’d been hoping for an update from Sean even though I knew that wasn’t likely. It was the weekend, and any more info from his lawyer probably wouldn’t arrive until Monday. I also kept thinking maybe we’d hear something from Housing, but so far, silence.
After I’d saved my document, I went in search of Tanner. He’d finished his work an hour earlier and said he’d be reading in one of the lounges. I found him in one of the alcoves, sprawled on a big couch under one of the heavily leaded windows. An open book lay tented on his chest—Dostoevsky’s short stories. His eyes were closed, those thick black lashes casting shadows on his cheekbones.
I approached slowly, wanting the time to keep looking. Tanner hadn’t had a haircut in weeks. Silky dark bangs fell across his forehead, begging for my fingers to sweep them off his face. Perfect lips, ever so slightly parted, looking desperately in need of a kiss. My gaze passed lower, taking in his long strong fingers as they rested on the book, his narrow waist, slim hips. I struggled to swallow. My cock enjoyed the show with me, not so silently encouraging me to climb on top of Tanner, toss that book aside, grind against him….
Tanner’s eyelids fluttered open, and he shook his head, craning his neck to look around. He yawned and stretched as he sat up. “What time is it?”
“Little after ten.” I sat next to him, needing to be close to him. He smelled warm and sweet. I breathed in, taking in as much of his scent as possible. God, I missed that. Sleeping apart for two weeks had me waking in the middle of the night craving him—his touch, his smell, his taste—all of him.
My thigh knocked into his, and he pressed back against me. “You wanna get out of here?”
I nodded, wanting to be anywhere as long as he was there too.
A light rain had started to fall, so we half jogged to the Towers.
“What do you suppose is going on in Wendy’s room?” I asked as we rode the elevator.
Tanner brushed rain droplets off his backpack. The elevator dinged and opened. “Guess we’re about to find out.”
Wendy’s door was open. Music and voices filled the hallway, and as we approached the room, a purple bra came flying out, followed by the sound of drunken laughter and cheering.
Tanner caught the elevator door just before it closed. “What do you say we go for a drive instead?”
“I say that’s the best offer I’ve had in weeks.” 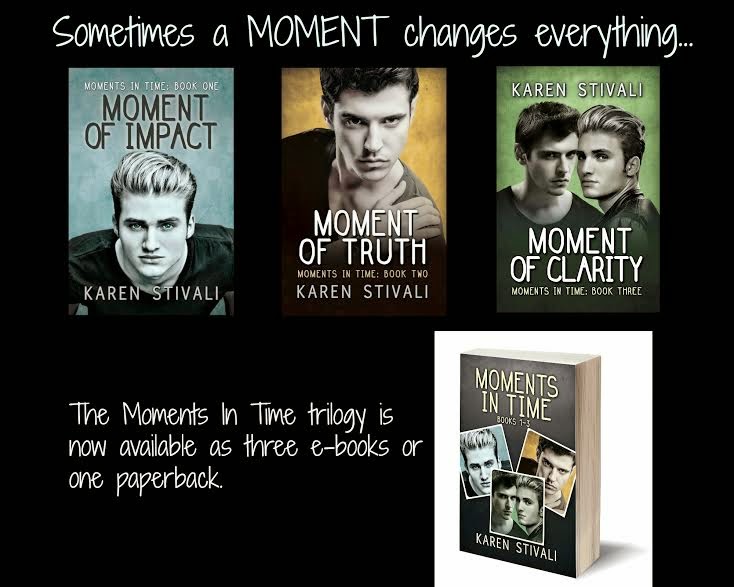 Contains books 1, 2, and 3 – Moment of Impact, Moment of Truth, and Moment of Clarity.
DsP: http://www.dreamspinnerpress.com/store/product_info.php?products_id=6284

Outside Collin Fitzpatrick’s dorm room is a dangerous place. Beyond his door the students of his small, conservative college think he’s straight, as does his Catholic family who’d disown him if they learned the truth. Inside, he’s safe with his incredibly sexy roommate Tanner D’Amico. Their room makes a perfect place to hide away and fall in love. The moment they cross the line from roommates to lovers, Collin becomes caught between their heavenly passionate encounters and the hellish reality that someone might find out and destroy everything. Tanner’s not used to being so confined, and wants to show the world how much he loves Collin. But Collin’s not sure he’s ready for the impact stepping outside will make.

Collin expected to spend another summer fixing cars and working at the college pizzeria. Instead, he’s living in a beach house on Fire Island, waiting tables at a hip seaside restaurant and, for the first time since he and Tanner got together, they can publicly be known as boyfriends. Being “out” takes some getting used to, but with the help of new and old friends, Collin is happier than he ever imagined. And more in love. But newfound freedom brings unexpected challenges, and when friends get flirty, old insecurities arise. Moments of doubt and jealousy threaten their happiness, and Collin and Tanner must confront the truth or risk losing it all.

Want more? Moment of Silence and Moment of Fate, featuring secondary characters in Collin and Tanner’s story, will be released in late 2015 and early 2016.

Karen Stivali is a prolific writer, compulsive baker and chocoholic with a penchant for books, movies, and fictional British men. She's also the multiple award-winning author of contemporary and erotic romances. Her lifelong fascination with people has led her to careers ranging from hand-drawn animator, to party planner, to marriage and family counselor, but writing has always been her passion. Karen enjoys nothing more than following her characters on their journey toward love. Whether the couples are m/f or m/m, it’s guaranteed that Karen's novels are filled with food, friendship, love, and smoking hot sex—all the best things in life.
When Karen isn’t writing (and often when she is), she can be found on Twitter attempting witty banter and detailing the antics of her fruit-loving cat, BadKitteh. She loves to hear from readers (and other writers), so don't hesitate to contact/follow/like her at:

Moment Of Clarity by Karen Stivali

I really enjoyed this series. These two worked their way into my heart. They started out so clueless and have slowly figured things out as they go along. Through all the hardships and heartaches, they continue to be there for each other, and their love grows. I love their youth, inexperience and excitement in life.

This installment is more of them having to prove to the world how real their feelings are and endure more abuse. They're both such great guys, my heart hurt for them during this journey.

Moment of Clarity was a great way to wrap up the Moments in Time novella series.