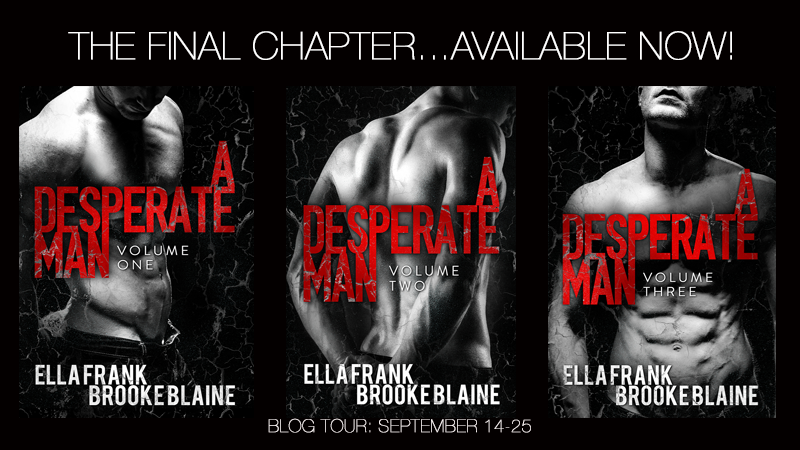 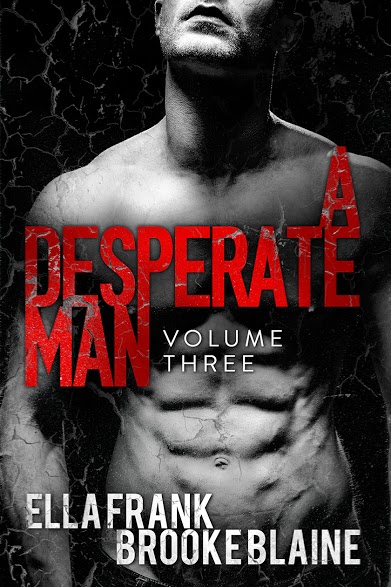 Sex. Addiction. Lies.
One night changed everything.
With the sins that stand between Evan and Reagan, can a relationship emerge from a past that is so broken?
Or will the weight of their deceptions crush any hope of redemption? 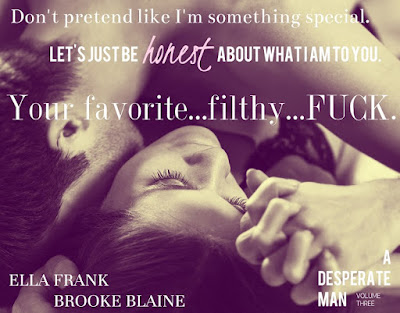 “SO LET ME get this straight.” Dr. Glover lifted the end of his pen to his lips as his eyes narrowed on Evan over the top of his glasses. “The woman we’ve been discussing over the past few weeks finally shows you that she wants more, and you left her in an emotional heap in her office. Did I get that right?”
Evan stretched his long legs out in front of him. She thinks I fucked a prostitute the day after I left her apartment, so, yeah, that’s about right. Sighing, he leaned back into the worn leather couch. “You left out the part about her being a liar. And not someone I met in the last few weeks. She had an agenda.”
“So did you.”
“And what the hell was that?”
“You wanted to fuck her.”
“Jesus, you get right to the point, don’t you?”
“Well, that’s what you do. Isn’t it?”
I thought it was until I became obsessed with a leggy fucking blonde. Evan glared at the man whose eyes he swore fucking twinkled. “Even if it is, what therapist talks like you do? I’m positive they don’t teach you that in Patient-Client Relations 101.”
“I’ve always been a firm believer in no bullshit. I told you that the day you walked in and tried to lie to me. We aren’t going to make any progress if you don’t trust me and I don’t trust you.”
“Yeah, yeah, I know. You’re just—”
“Yes, Evan?”
Evan waved him off. “Nothing. I guess I’m still trying to process the fact that Reagan is that little girl from so long ago. A whole fucking life ago. It’s… I don’t know,” he said, running his fingers through his hair in frustration. “It’s disconcerting. She knew me before.”
“And that bothers you.”
“Fuck yes, it bothers me. I was ten years old the last time I saw her. Innocent. And now I’m…this.”
“You’re awfully hard on yourself. I wonder if you’re upset over what you’re saying or over Reagan thinking bad of you.”
And there it was. The truth he didn’t want to admit. Reagan accusing him of being with anyone hours after he’d been with her had infuriated him. Which was ridiculous, because he knew what he was. The demons he’d been trying to fight. Why would she assume anything but the worst? But with that anger came embarrassment and shame. He hated that she’d seen him on that corner. Hated that she’d seen him with Layla. But how the fuck could he ever convince her otherwise? And why would he even want to?
“She’s a liar,” he said.
“And you’re a sex addict. Fantastic pairing.” 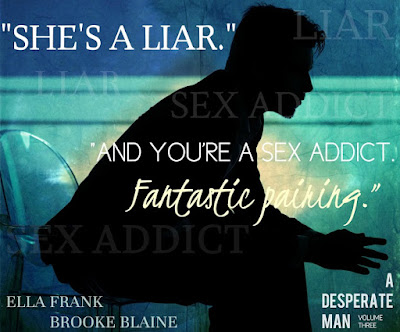 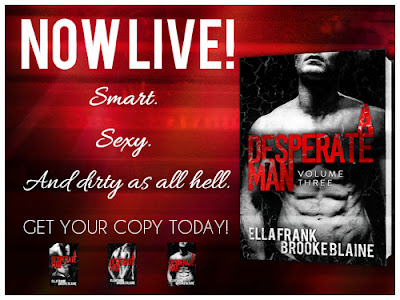 You could say Brooke Blaine was a book-a-holic from the time she knew how to read; she used to tell her mother that curling up with one at 4 a.m. before elementary school was her ‘quiet time.’ Not much has changed except for the espresso I.V. pump she now carries around and the size of her onesie pajamas.
Flash Point is her debut solo novel, and she is the co-author of the erotic serial, A Desperate Man, with Ella Frank. The latter has scarred her conservative southern family for life, bless their hearts. Licked, a romantic comedy, will be released on November 11, 2015.
If you’d like to get in touch with her, she’s easy to find - just keep an ear out for the Rick Astley ringtone that’s dominated her cell phone for ten years.

The three parts to this serial have very different vibes in my opinion. The first is more darkish and depraved. The second has a lighter more playful feel. This final installment is about facing issues and finding out where the characters truly stand.

Evan and Reagan both have faults. One is a sex addict, and one is a liar. Reagan is as in her head as ever, and Evan is still trying to shake off his troubles. Underneath it all, they have a common history, but they have to decide if it is enough to see them into the future. Also they are figuring out if their combined problems are insurmountable or if love is enough to overcome all the bad.

Desperate Man Volume Three has elements of acceptance and understanding. I believe the authors did a good job of tying all the loose ends. This finale was satisfying. Readers are sure to love the banter between Evan and Reagan and their work toward happiness.