One A Collection of Short Stories Release Blitz Review 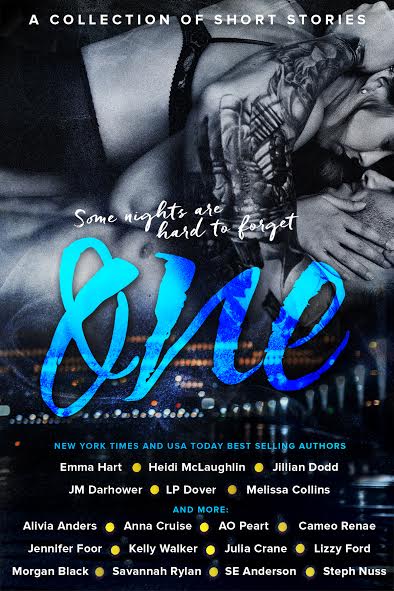 Blind Date by Emma Hart ~ Blind Dates are the work of the devil… especially when your date could be the devil. My name is Bee Donnelly, and I’m a serial one-nighter. Carter Hughes is tonight’s Kryptonite.

One Night with Harrison by Heidi McLaughlin ~ Alicia Tucker has had her eyes set on Harrison James from the beginning and all she wants is one night to prove she’s the one for him.

A Vegas Love by Jillian Dodd ~ Boy (so freaking hot) meets girl. On that drunken night, they hook-up (twice), then decide to party in Vegas, and end up getting married. Consummate said marriage (quite a few times) then girl sneaks out in the morning.

Lucky by JM Darhower ~ One night. That's all Maddalena Bazzoli has left before family duty kicks in. Tomorrow, she'll be a committed woman, so tonight? Tonight she's getting lucky and throwing caution to the wind.

One Taste by LP Dover ~ All Luke wanted was one night with the girl he wanted, but didn’t deserve. When he finally gets her, one taste might not be enough. Unfortunately, it’s all he’s going to get.

Before the Wreckage by Melissa Collins ~ It’s been eighteen years since David Andrews has seen Grace McCann. One night she’s in his dream and the next she’s in his reality.

Hold It Against Me by Alivia Anders ~ Alyssa Grace is determined to settle an age-old score, one that Mason Weston will never forget. They say the easier way to get something out of your system is to indulge in the fantasy.

Prelude by Anna Cruise ~ After a fight with his on-again, off-again girlfriend, the last thing Nash needs is a mysterious stranger knocking on his door in the middle of the night. Because as beautiful as she is, their encounter will only be a prelude to much uglier things headed his way.

Thou Shall Not Fall in Love by AO Peart ~ What happens when a frustrated-with-her-love-life professional matchmaker meets a committed-to-celibacy divorce attorney? An explosive and delicious mixture of wild sex and brazen humor neatly wrapped in a friends-with-benefits agreement.

Quintessence by Cameo Renae ~ One night. One stolen moment. One complete stranger. One bite. That’s all it took to change Kate’s life forever.

A Frigid Encounter by Jennifer Foor ~ A winter storm brings a woman and man together during dire circumstances.

One Night Wife by Kelly Walker ~ Cole wants one night with a pretty face before he deploys with his unit in two days, but the last thing he expects is for his childhood crush to open the door. With only one night to spend together, can they make up for a lifetime of missed opportunities?

Only Once by Julia Crane ~ With only months to live, Meghan Clarke throws caution to the wind when she meets an arrogant stranger who makes her feel more alive than she has in years.

Finding Skye by Morgan Black ~ Skye Kellan just wants a body to snuggle up against during the lonely nights that remind her of a dark past. One night with a potential client, is exactly the release she needs. No nightmares when you don’t sleep, right?

Shattering all the Rules by Savannah Rylan ~ A rare night off. A girls night out. When Simon meets Carolina, neither can deny themselves any longer, and both decided it’s time to shatter all the rules.

Press Your Luck by SE Anderson ~ Marko Veltriv is used to getting what he wants, but there’s always been one thing he knows even he can’t have. Coogan MacNeal is a stranger with a dangerous temptation--one night, indulging in his risky fantasy. How can Marko possibly resist?

Surprised by You by Steph Nuss ~ Tessa Wilder is in for a night of surprises when Justin Jameson offers her a ride home. 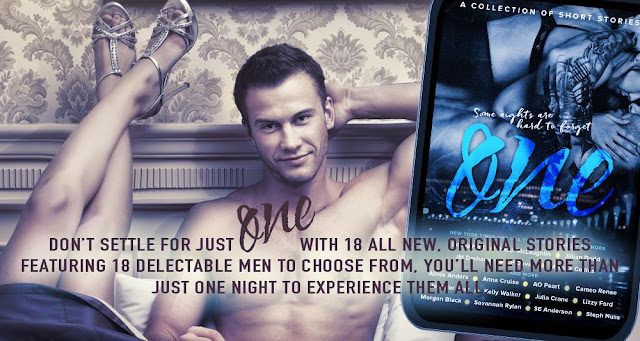 ONE: An Exclusive Collection of EIGHTEEN Brand NEW Sexy One Night Changes Everything Stories by Heidi McLaughlin

So far I have only read LUCKY by J.M. Darhower. This author does organized crime like no one else. She always knows how to hook me.

Lucky is about a girl with a mobster father who has agreed to an arranged marriage for her in order to join two mafia families. She's not elated about this plan; so, tonight she's heading out for one last hurrah. Girl definitely sows some wild oats. Great prequel! And that ending left me very excited for the upcoming Twenty to Life.