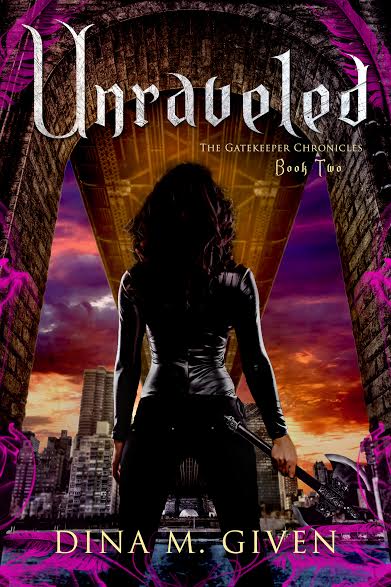 Emma already has blood on her hands, and the tide of Monere keep coming. She quickly learns that not all battles can be won with a gun and she must decide whether to take up Sharur, the magical battle axe, which may trigger a latent and terrifying magical ability within her.

Emma’s monster hunting skills also catch the attention of a government operative who enlists her help to discover the identity of another hunter. This investigation leads Emma deep into the heart of a supernatural organized crime Syndicate, and all of her notions about the evil nature of these creatures are called into question when she meets The Syndicate’s leader.

Can Emma unravel the true nature of the Monere and come to terms with her own magical ability before the next gateway opens, threatening the future of humankind? 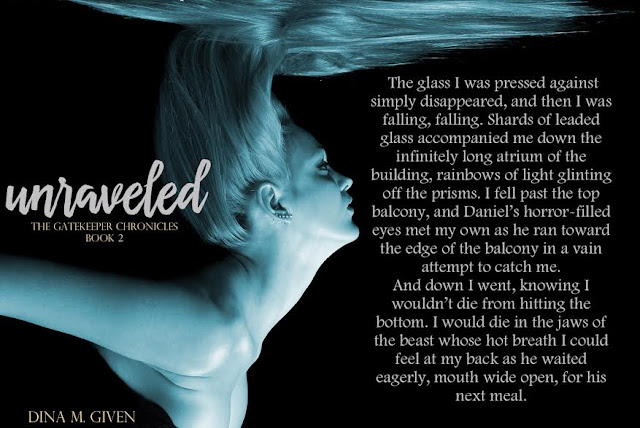 With this proximity, I could see each hard angle of Alex’s face and body. I had either never had the luxury of this kind of quiet downtime with him, or perhaps I had never allowed myself to really look at him before, but I did now.
His light hair was longer than usual and mussed from the excitement of the evening. A stray lock fell across one brilliantly green eye, the color of a lush rainforest. His body tensed, showing off every taut muscle through his thin T-shirt.
He was beautiful, but he didn’t know it, or if he did, he had never used his looks to his advantage. I had never seen him flirt, throw around an enticing smile, or pin someone with a smoldering stare. Although he could certainly do it, he probably thought that kind of influence was a form of cheating. He could be such a Boy Scout, but it was charming and made him trustworthy, and to trust someone was more important than a bad boy attitude any day.
This man sitting before me had sacrificed his own safety several times to save me. His job had initially been to keep an eye on me for Alcina and the Mage Council, and kill me if need be. Not only did he defy his orders, but he did so spectacularly when he saved my life in Citi Field and sided with a shifter to ensure my escape. He defied his people and his prejudice for me.
The sultry air in the subway car seemed to grow warmer and closer as these thoughts smoldered low in my belly. A rush of longing and gratitude swept through me. Alex must have sensed it because he chose that moment to lift his head, and our eyes locked. His expression reflected everything I was feeling, and I was consumed by a desire to see whether the Boy Scout would ever explore bad boy territory.
I stood slowly, as if trying not to spook a nervous horse that was on the precipice of bolting, before lowering myself onto the futon next to Alex. His eyes followed my every movement, sweeping across each curve of my body. His expression didn’t change, but his body stilled, all of that nervous fidgeting coming to a grinding halt.
I slid so close to Alex my thigh rubbed against his, and he reacted like I had electrocuted him with my touch, his leg jerking at the sudden sensation, but he didn’t move away from the physical contact.
“Thank you,” I said so softly it seemed as though all of the upholstered fluff in the room had absorbed the sound.
“For what?” Alex asked, his eyes now resting on my leg where the clothing had burned away to reveal the newly healed, creamy skin.
“For everything,” I said with a small laugh, and he looked up then met my gaze. “Seriously, you saved my bacon a few times now, and I don’t think I ever thanked you. I know you didn’t have to do it, and I know it went against your orders. You put yourself at serious risk for me.”
His warm hand slipped into mine, and I embraced the unexpected touch, wrapping my fingers around his. “Emma, no matter what happens I want you to know that you mean everything to me. You always have. Even though I may have lost my way, that truth will never change. I need you to believe that.”
The burning sincerity in his eyes was proof enough.
“I do,” I said, squeezing his hand gently for emphasis. It felt a lot like he was saying good-bye. Maybe all of this was just too much for him.
Tears sprung to my eyes, unbidden, and I turned away to hide them. Alex hadn’t missed them, though.
With his free hand, he cupped my chin tenderly and turned my head to face him again. “I’m sorry. I didn’t mean to upset you.” He looked on the verge of tears himself.
“You didn’t. It’s just that… Well, there haven’t been very many people in my life who have cared enough to want to help me, or to try to save me.” Even though I didn’t know exactly what Alex had meant by his last statement, I felt compelled to let him know I wanted to be there for him too. “If you ever do lose your way, I promise I’ll help you find it again.”
Our gazes were locked together in a need for connection. I became hyperaware of the sensation of my thigh pressed against his and the comforting touch of his hand in mine. My leg shifted minutely, as if it had a mind of its own and wanted to increase the sensation of that subtle touch, calling attention to it. It had the desired effect.
Alex watched me through heavy lids, and I could suddenly feel the air thicken with anticipation. We were so close. All I had to do was lean in a couple of inches.


I wasn’t sure if I moved, but Alex’s eyes darted to my lips, which I licked unconsciously. He sucked in a hard breath as his own lips parted, and I could see his muscles bunching under his thin T-shirt as his body prepared to move toward me.

It’s not always easy to differentiate between the good guys and the bad guys, especially when your heroine is a trained killer and she may be falling in love with her evil hunter…

Emma must use every skill in her arsenal to stay alive as she tries to solve the mystery of why she has been targeted. Her list of enemies keeps growing - from Zane Shayde, an evil Mage, to a secret branch of the US government - and she doesn't know if there is anyone left she can trust.

To complicate matters further, Emma is inexplicably drawn to Zane in a way she doesn’t quite understand, even knowing her life is forfeit if captured. Who is he and why does he have this affect on her? How can she fight a being that calls to her, body and soul?

Emma is left haunted by questions, doubts and fears as to why she has been targeted, when they will come for her next, and how she will possibly be able to survive against an enemy she doesn't understand.

Dina Given lives in rural New Jersey – home of farms, horses and the largest hot air balloon festival in North America – with her husband, two crazy kids, and one rescue dog. She is an exercise enthusiast and avid lover of food and wine (hence the need to exercise). Dina also works full time for one of the largest healthcare companies in the world. She attributes her ability to juggle family, work and writing to her obsessive, hyper-focused, Type A personality.

Unraveled by Dina Given

I love the action vibes that come from this book. Reading it got me totally pumped. The first novel established how formidable Emma's adversaries are and how she's totally up to that challenge. Just as in Unhidden, Unraveled is full of monsters and aliens. Some are the traditional fantasy like dragons and vampires. Others are more sci-fi such as brain-sucking parasites and creatures wearing humans.

To me this book gives a little more of the emotional side of Emma. The most important people in her life are being used against her because they're one of her few weaknesses. In my opinion, she seems to worry more about her actions this go around.

Several new characters and lots of background knowledge are introduced into an already explosive atmosphere. Questions of who's really bad or good and what's the actual source behind certain outcomes arise. Although, it's more action than romance, there's a bit of a love triangle going on also.

Fans of urban fantasy should definitely try this series. If you enjoyed the first installment, this one is just as volatile and fun. I'm looking forward to book three.