Better the Devil You Know by Bey Deckard Review 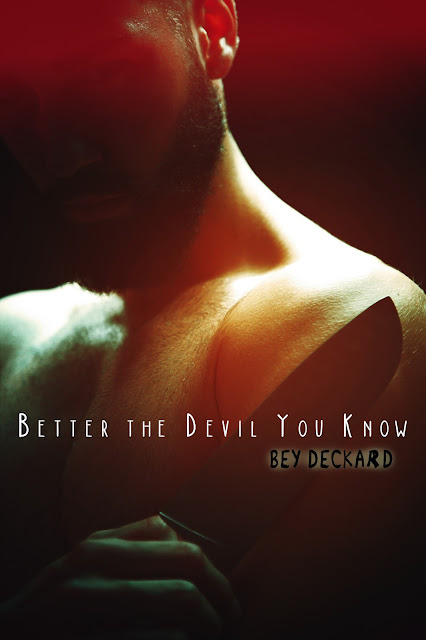 Byron is tall, handsome, well spoken, wealthy, and has outstanding taste in wine and food. You’ll be impressed by his impeccable attire and eloquence in conversation, ranging from Baroque art to the newest advances in pharmacology. With his charming smile and elegant manners, Byron truly is the perfect date… and who doesn’t love a man who appreciates opera?

What’s the catch, you ask?

Just this: if Byron finds you suitable, he will subject you to utterly depraved forms of torture.

No, I’m not talking about S&M.

Byron will mutilate, rape, and then kill you. Don’t think that you will survive the encounter, because you won’t. He has a perfect record.

Intrigued? Would you like me to arrange a rendezvous? It has to be in the next few days because he’s leaving on a trip south to much warmer climes, and his calendar will be completely full.

Yes? Very good. I will make a reservation for two under the name of Smith.

Who am I? I’m Gloria, his personal assistant.

FROM THE AUTHOR
"Write something dark," they said.


Bey currently lives in the wilds of Montréal with his best buddy, a spotty pit bull named Murphy.

Better the Devil You Know by Bey Deckard

4.5 stars
My brain says, "The writing was genius, at least 5 stars."
My sensitive soul says, "Owie, that hurts."
So we had to meet in the middle.

Sexually dark books have always fallen into two categories in my mind. The first has a warped lead who mentally or physically tortures an unwilling subject so deeply that my psyche winces, but despite everything, the recipient and I still develop Stockholm syndrome for him. The second has a completely evil role who mutilates or gruesomely murders the victims of his sexual urges in graphic detail. He pushes me too far, causing a loss of all emotional connection which turns the material into a bad read for me.

Better the Devil You Know made it's own new category. I had that sick feeling of going too far during more than one scene; yet, my attraction to the plot didn't break. Also while throwing out these horrors on the surface, there's a different storyline bubbling underneath. The reader is presented with a mystery and a differing outlook than the usual. There's a lot of shock factor, but there's also intelligence.

Byron is medieval and savage upon several people during his life. The accounts of some of his 'dates' are given. Although the story is told in third person, the accounts are from the point of view of Byron's prey. Each tale gives further clues in the overall scheme of things.

This is one of the darkest books I've ever read. Parts of it were so disturbing that I don't even know how to convey the depravity. It is absolutely not for many, but for a certain audience, it is perfection. Better the Devil You Know is horrific, smart and beyond rare.