Sacrificed: Heart Beyond the Spires by Bey Deckard —Top Reads Published in 2014 —Interview 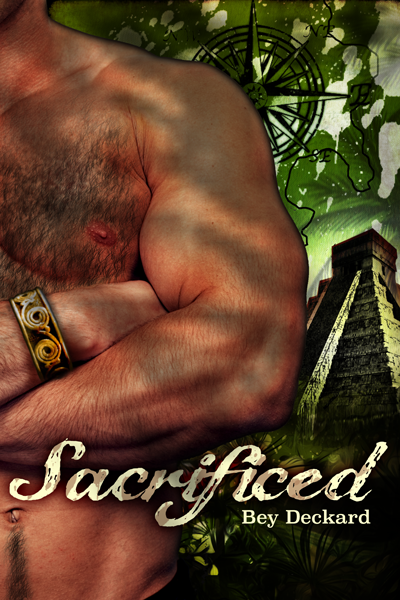 Novel (127,090 words)
Genre(s): Historical Fantasy, Erotic Action/Adventure, Gay
Reunited once more, the crew of Baal’s Heart must make the long and treacherous journey south to the towering spires of the Devil’s Isles. The path through the mountain range is fraught with peril; mayhem and tragedy plague the pirate ship, but what the men find beyond the spires is the most shocking of all.
In this sequel to the acclaimed Caged, the pirates are dragged into a dangerous new world by Captain Baltsaros’s all-consuming obsession. In the midst of terror and chaos, Jon learns that the captain and first mate have been keeping secrets from him. But will the truth tear them apart?

Do you have a deleted scene or upcoming scene (or both) from the Baal's Heart series you can share?

I don’t have any deleted scenes. However… here’s a small excerpt from the third Baal’s Heart book.

The slave opened his eyes and was relieved to see that the little square was almost empty. That was good. When the men from the mining town were on their own, they mostly left him alone; the abuse came when there were a few of them together, and it was always worse when they had been drinking. The slave figured he’d been pissed on by every man in town. And probably every dog. He winced at the thought. His own bladder was full, but he held it even though eventually he’d be kneeling in his own piss puddle again.
With another painful shift, the slave closed his eyes. He wished that they’d just killed him when they found him covered in his master’s blood.

Blinking slowly, the slave raised his head at the sound of someone approaching on one of the wooden planks that served as walkways in the town square. He must have fallen asleep again. It was amazing what someone could suffer through and still get some bloody sleep. He eyed the men approaching as he licked rainwater off his lips.
The one on the left, the one who had put him in the stocks nearly a week earlier, was his master’s brother-in-law Lester. He didn’t recognize the other.
The stranger was tall and, as he walked with long strides, the hard soles of his black leather boots thudded loudly on the warped, wet wood. As they got closer, the slave could see that the man wore a greatcoat that covered him from chin to ankle, and atop his head was a wide black hat with a curved brim. The only hint of colour was a bright-red silk scarf that peeped above the coat’s collar when the stranger turned his head to speak to Lester. When they stopped next to him, the slave had to crane his head up to see the two, and the rain blurred his vision somewhat. Or, he thought, maybe it was the lack of food finally getting to him.
Squinting, the slave silently studied the stranger. He was a middle-aged man with a tanned, angular face, a fine, thin nose, and a top lip that was bowed like a gull’s wings. He had a foreign look to him that was confirmed by the strange accent he spoke with after he had circled the slave a few times.
“He’s damaged,” the man said quietly, “on top of being obviously half-starved and subjected to the elements.”
“What of it?” growled Lester. “I ain’t lowerin’ the price, if that’s what yer after, Captain. Yer gettin’ him fer a song as it is. He’s as strong as a bloody bull, I can guarantee at least that.”
“Regardless of what you get for him, you’re making a profit,” pointed out the tall man, a wrinkle appearing on his smooth brow. “You told me you were going to have him put down.”
“Three silver. Take it or bloody leave it,” muttered Lester.
The slave made himself look directly into the stranger’s dark, deep-set eyes and was surprised by what he saw there. No pity. No disgust. Just quiet self-possession. The tall man’s eyes widened slightly after a moment.
“I will give you five if you arrange for his transport to my ship,” said the stranger, turning away and lifting a small, red velvet pouch from his coat pocket.
Lester swore under his breath. After a few seconds he nodded.
“Fine. But, I’m bloody done with this devil. He’s yer trouble now,” he growled, and accepted the coins. Lester handed the key to the stocks over to the stranger and turned to go arrange for a wagon.
The slave ground his teeth together. He had just been sold for less than the price of a barrel of beer. He scowled at the stranger in the coat. The man was probably a pervert. The slave had seen his kind before. All perfumed and proper and dainty manners until they had him chained to the bed. His heart jumped quick in his chest as he prepared to bolt as soon as the stocks were open. However, the tall man stared at him a moment longer, a small smile playing over his lips.
“There is nowhere to run,” he said softly. “It would be a miracle if you could even get to your feet on your own.”
The slave bared his teeth and clenched his hands into fists.
The stranger chuckled and slipped the key into the lock. The mechanism clicked.
With a roar, the slave forced himself up and ran, his legs pure fire as he tried to make his escape. However, he got no further than a half-dozen paces before something cool and strong curled around his neck and jerked him backwards. He landed on his back in the thick mud and began to writhe, trying to regain the breath that had been knocked from him. The stranger stooped over the slave, pulling free the whip from around his neck
“Impressive,” was all the man said before relieving the slave of consciousness with the weighted whip handle.

How do you weigh-in on the whole #TeamTom team whoever thing?  Do you have a favorite character?

Well… I like them all for different reasons, and the amount I like them varies day to day, depending on my mood. I think the #TeamTom thing is great… pretty amazing how people took to him, eh?

If I had to pick one out of the three (Baal’s Heart), I think I’d have to pick Tom.

Where do you get the ideas for your characters?   Are they somewhat based on anyone real or totally from your mind?

I get ideas for characters from everywhere. I read a lot (or at least I used to), and I watch a lot of movies. I people watch. The three MCs in the Baal’s Heart books are based on different facets of my own personality and represent, in a lot of ways, my constant fight with strength and weakness, dominance and submission, and self-control. In the F.I.S.T.S. books, the two MCs came from a dream I had… but they’re also modeled on personal taste. My secondary characters seem to be a mix of people I’ve known.

Do you prefer writing or drawing best?

I prefer writing. I love drawing… but words are where it’s at for me right now.