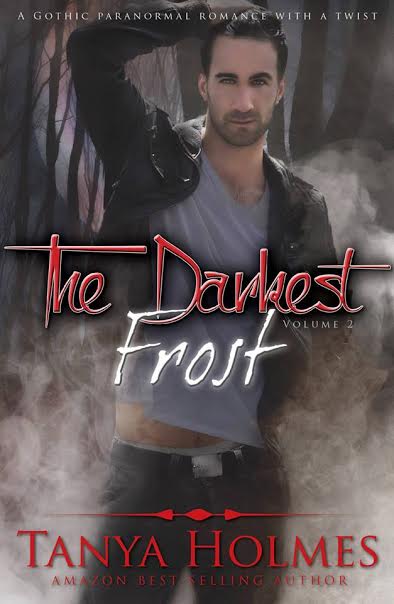 Blurb
The job seems simple enough at first: go undercover and catch her best friend’s killer. But psychic detective Denieve Knight gets more than she bargained for when she enters Dr. Braeden Frost’s estate as a “housekeeper.” She's supposed to be sleuthing, not falling under the spell of the enigmatic doctor and his irrepressible, hellion of a brother, Xavier. Now after two months of working for the man known as “Dr. Death,” she's entangled in a web of secrets and lies. Each discovery only leads to more questions. Though faced with declining health and a storm of confusing feelings and simmering passion for both brothers, Denieve is determined to uncover the truth---consequences be damned. Yet the truth may prove deadly once she discovers just how deep the rabbit hole goes.

When the ghost of her best friend begs for her help, psychic detective Denieve Knight goes undercover as a live-in domestic to catch a killer. She sets her sights on the most likely suspect: her friend’s mysterious employer, Doctor Braeden Frost. Dubbed "Dr. Death" by the press, the notorious hematologist is linked to nineteen other suspicious fatalities—all are former patients. The brooding recluse is a man of many secrets, the darkest of which may be lurking beneath the leather gloves he never removes.

About the Author
Amazon Bestselling Author Tanya Holmes is a Golden Leaf double-finalist, a Romance Writers of America Golden Heart finalist, a recipient of the Maggie Award, the MICA Award, as well as Overall Winner of the Sandy Haddad Award and a two-time finalist and one-time winner of The Emily (Best of the Best). She's happily married with children and loves reading, writing and a good cup of coffee---but not necessarily in that order. She has two novels coming out in 2015: The Darkest Frost, a two-part Gothic paranormal serial romance with a twist, and in 2016, Temptation's Edge, a contemporary romance.
Connect with Tanya Holmes
Amazon author page | About Me page | Tsu | Twitter | Homepage | Goodreads author page | The Darkest Frost Facebook page

Wow, this story is so different from the PNR's that I've read. It's a detective mystery combined with a romantic fantasy.

Denieve has a type of psychic gift, which she uses to go undercover to figure out criminal activity. She knows there's something big going on behind the scenes after meeting the Frost brothers. Even with murders and deceptions surrounding Braeden and Xavier, she still cannot deny the attraction she feels. To top it all, she's falling for both of them. And an even bigger worry is that she has started to suffer from an unknown illness since living under Dr. Death's roof.

Volume 2 picks up right where volume 1 left off and opens up to a much bigger world than I imagined. The things that are happening with the Frost brothers and Denieve have a much broader impact than expected. More in depth explanations of everyone's past is given also.

"He's the darkest Frost. Not me. He's the one who needed a heart. So I gave him one."

I know my review is kind of vague, but I didn't want to give away spoilers. The most fun for me while reading was trying to figure out which brother I love more, which characters are good or bad and which of my predictions were correct. For me this series was unexpected, entertaining and fulfilling. PNR lovers should definitely check it out.