Songs of the Earth by Lexi Ander Blog Tour Review 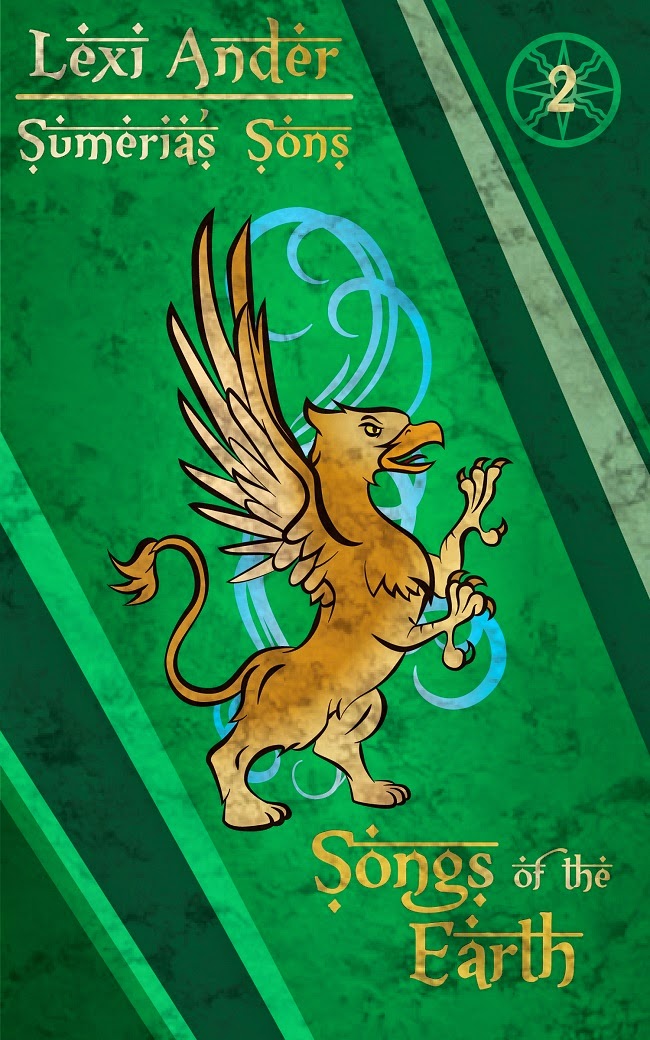 Thrust into the role of Prince of the Lycans, Tristan strives to find his footing in a life suddenly rife with secrets and lies—and danger. Betrayed by a Goddess meant to safeguard him, desperate to protect his consort and their growing tribe, he can only prepare for the worst and struggle to hope.

And then the worst comes to kill them…


Excerpt: Songs of the Earth

I sat on my horse, Dancing Socks, in the middle of the river that cut through my property, the chill of the water numbing my legs. We were stuck, trapped between two creatures of myth and a Goddess of the Lycan race. Behind me, six of my warriors in the fearsome Lupe battle form braced to protect me.
I was in deep, deep shit. For the life of me, I couldn’t see a way out. Two Shirdals―lion-eagles also known as gryphons―one in front of me and one behind, effectively cut off any escape. Socks and I couldn’t outrun these Sumerian creatures of myth. But they were the least of my problems. What held my full attention was the woman standing before me on the water’s edge.
The Goddess Ki, clothed in a long, flowing gauzy dress, wearing a crown of ram’s horns, with a bow and quiver of arrows over her left shoulder and a cudgel hanging from her waist. She held a lion cub’s leash while regarding me with a stern, assessing gaze.
“Tristan Javed Ksathra Janick, Prince of the Enkidu, do you know who I am?”
How could I, or any Lycan, not know her? Regardless of what had happened today, I’d believed there was a solution. There was always a way out as long as I continued to breathe—but this, her, I couldn’t fight and win.
“You are the Goddess Ki, consort of Enki, Lady Life, mother of all living things, Nourisher of Kings. I greet you, Goddess. Do with me as you will.”
From across the water, Ki smiled a very white smile. “Come to me, Tristan. We have much to discuss,” she commanded.
I nudged Socks with my knees and she reluctantly finished crossing the stream, nervously tossing her head and rolling her eyes at the Shirdal. Once out of the water, I guided her a safe distance to the side and dismounted, removing her wet saddle and blanket. Her muscles twitched as she held still for me.
For a moment, I leaned my forehead on Socks’s shoulder. She reached around and nibbled at my hair. Not a half hour ago, I had left the ranch to go for a ride. The morning had offered many revelations with an accumulation of events that changed the course of my life.
After breaking the bond with my Twin Flame, Theo Sullivan, I hadn’t expected to find happiness or to fall in love with my best friend, but I had. Last night we made love, and it had been the best night of my life. This morning I’d awakened to find out I was born of royal blood, and Ushna was my chosen consort. Before I could begin to grasp what that even meant, Caspian MacCuill—one of the Magi—and a group of Lycan warriors invaded my home and attempted to kidnap Ushna and blackmail our friend, Gregori Borchetta, which led to Ushna being shot while trying to protect me.
All I had wanted was an hour. One single, measly hour to gather my thoughts and figure out what the hell we needed to do next. Instead, I sat trapped with no way to escape. The only course of action left to me was to save as many lives as possible. No mortal defied a Goddess and lived. If only I knew what I’d done to draw her attention.
Reluctantly, I straightened, petting Socks’s velvety nose before I removed her bridle. Giving her a smack on the rump, I sent her away. With luck, she’d return home safely and not be eaten.
Ready for whatever fate awaited me at the hands of a Goddess who hadn’t walked the Earth in a very, very long time, I turned to Ki and waited. It couldn’t be taken as good fortune that she was here now.
“Why so gloomy, Tristan? Do you think so poorly of me that you expect to be struck down by my hand?” Ki asked, head tilted to the side as she stared with almond-shaped black eyes.
One Shirdal lay at her feet, allowing Ki to scratch the feathers between its ears. The picture presented seemed surreal, two things that shouldn’t exist in this modern world of skyscrapers, automobiles, space shuttles, and nuclear bombs. Yes, I kept an altar in my room where I left burnt offerings to the Warrior Goddess Anat and Shamash, God of Justice. Believing in the Gods and Goddesses didn’t mean one would manifest into my world and actually speak to me.
“I don’t wish to offend, Goddess. It’s… well… this has been a very unusual day. Right now, I’m assuming the worst because I cannot fathom why you are here—speaking to me.”
She gave me another toothy smile and glanced across the water to the Lupes harassing the other Shirdal. “Please call your warriors to you, Tristan. The Shirdals meant you no harm. They were only playing.”
I barely withheld an ugly snort. Playing with me? I could imagine them playing as they tossed me about with their sharp beaks. Without a word, I lifted a hand to the Lupes and they entered the water, intent upon me as they crossed in a straight line. 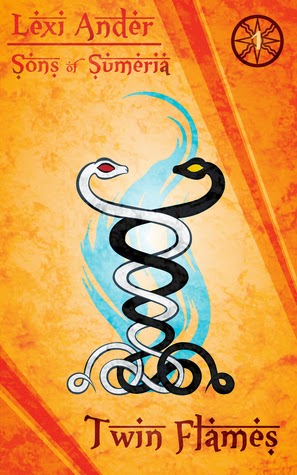 A Lycan descendant of Gilgamesh and Enkidu, Tristan is not as extraordinary as his ancestors. He is an average warrior, unremarkable throughout. But this fact does not trouble him because he has found his Twin Flame, the one person destined to be his, who will love him unconditionally, life after life.

Then his Flame betrays him, leaving him shattered and dying. Brokenhearted, Tristan dissolves the sacred bond and leaves. His best friend, Ushna, accompanies him, vowing to guard and protect him, and Tristan slowly comes to realize that love does not require a sacred bond.

But if he hopes to keep the love he chooses, they will first have to survive ancient secrets, lies, mythical creatures, and the return of absent gods... 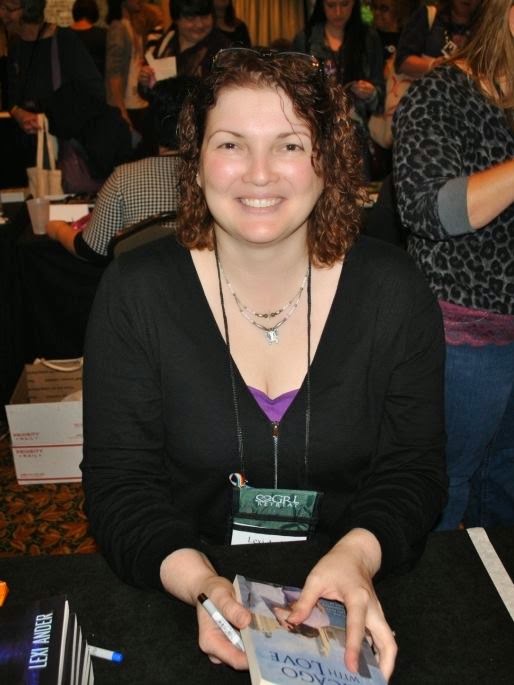 Lexi has always been an avid reader, and at a young age started reading (secretly) her mother’s romances (the ones she was told not to touch). She was the only teenager she knew of who would be grounded from reading. Later, with a pencil and a note book, she wrote her own stories and shared them with friends because she loved to see their reactions. A Texas transplant, Lexi now kicks her boots up in the Midwest with her Yankee husband and her eighty-pound puppies named after vacuum cleaners.

Songs of the Earth by Lexi Ander

Wow! That was an extremely wild ride. This is a shifter book, but it's also full of magic. And it has lots of mythology and gods. The author must have did a lot of research to incorporate so much detail.

The leads are great guys. I enjoyed their sex scenes. I especially felt how much they cared for each other.

The book isn't a super long book, but so much happened. All of the everyday shifter information was given. Family matters and tribe matters were discussed. The couples had their regular couple situations. The magic council had major parts also. So much is still to be told about them. Then there are the gods and mythological creatures. The background of gods and explanations are interwoven into the story. Lots and lots of components, so prepare to pay attention. I've read all of these before, but I don't remember being fully immersed in each at the same time before. Also there are rituals preformed and a M/M pregnancy. I have absolutely no idea which direction the next book will go; so, I'm just going to strap in and get ready for anything.