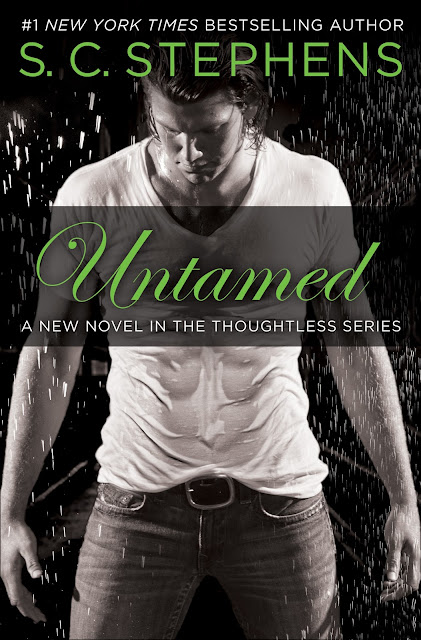 #1 New York Times bestselling author S.C. Stephens brings us the next book in her Thoughtless series!
The spotlight doesn't only shine. Sometimes it burns.
Being the bad-boy bassist for the world's hottest band has earned Griffin Hancock some perks: a big house, a fast car, and most importantly his incredible wife, Anna. The one thing it hasn't brought him is the spotlight. Anna tells him to be patient, that his talent will win out. But Griffin is through waiting for permission to shine.
Without warning, Griffin makes a shocking decision and takes the gamble of a lifetime. Suddenly he's caught up in a new level of lights, cameras, and chaos. One that pushes his relationship with Anna to its limits. Anna has always found his unpredictable behavior sexy, but lately he's seen an ache in her eyes--and it has his soul in knots. Just as the recognition Griffin seeks is finally within reach, the thing he loves most in life could be slipping through his fingers...

This book floored me. I don't know what I was expecting, but what I got surprised me. Untamed is a story of personal growth and redemption.

Everything is told from the mind Griffin, which can be a totally crazy and scary place sometimes. For me the story went through stages. The beginning is hilarious. I knew Grif would be funny, but I literally could not keep from laughing out loud. Then he became obsessed with having a bigger part in the band. I felt sorry for him when he was constantly turned down. Kellan's shadow is a dark place sometimes. That morphed into a spotlight on his total self-absorption. What is apparent to the reader, isn't so easy for him to see. This leads to him eating crow in a big way.

I stayed up most the night reading Untamed. I groaned at some of the antics Griffin pulled. I became so nervous at times when it seemed everything was falling apart. I even cried several tears.

Before this book, I only thought of Grif as the joker. It takes awhile, but seeing a different side of him is wonderful. I never thought about Anna so much before Untamed. She's an amazing character and perfect for him. They're excellent at keeping the sexy spark alive. All of the band members and families add to the depth, and I liked seeing more from everyone.