Fated: Blood and Redemption is one of my top reads for 2015.  I contacted the author for an interview on previous and upcoming releases.  Continue reading for author questions and answers as well as an excerpt from a future book.

Thank you Bey for your time and excellent writing skills.

Bey currently lives in the wilds of Montréal with his best buddy, a ridiculous, spotty pit bull named Murphy. 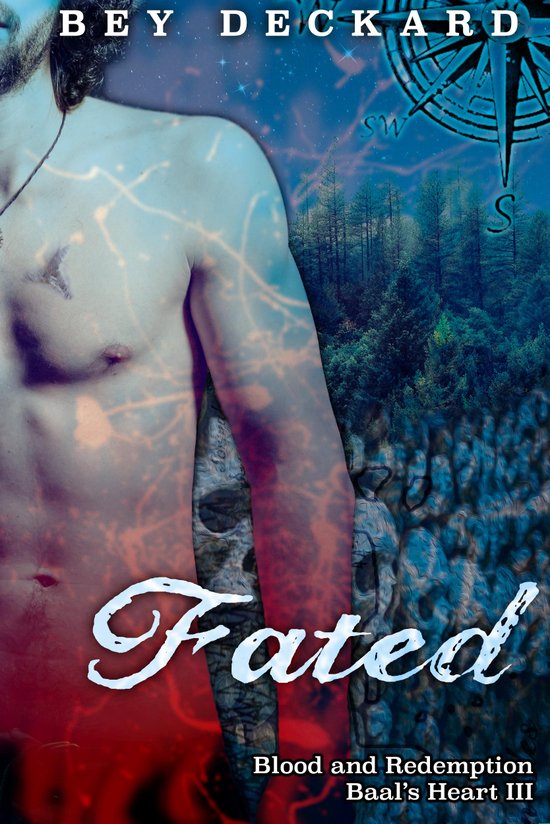 Novel (117,000+ words)
Genre(s): Historical Fantasy, Erotic Action/Adventure, Gay
With the captain’s mind in shambles, Jon and Tom set out to find the passage home through the black mountain range, hoping to find a cure for Baltsaros’s madness. However, when the men are forced to part ways, darkness takes root in the schism created; fate, lust, and vengeance become obsessions threatening to tear apart the fragile bonds holding the three together.
Following on the heels of Sacrificed, Fated takes the pirates on a quest to find those responsible for the captain’s bloody beginnings. But can they survive what awaits them where past and present meet? 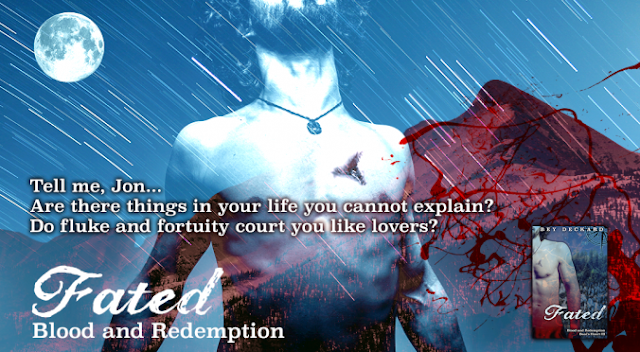 How did the idea for Baal's Heart first come to you?
The idea of writing a pirate story had been there for a while, even before I had written anything at all.

I've always loved pirates. I used to imagine myself as one, sitting on the prow of my uncle's old wooden boat. So much of the life was appealing. To me, pirates represented freedom. A collective thumbing of noses at the law. A labour of love to work like interlocking parts, caring for the vessel that keeps the wild, indiscriminate power of the sea at bay.
After years of study on pirates and their history... well, I still feel the same. Sure, it's not as simple as what I've written above, but that's the gist of what I wanted to capture, along with the colourful tapestry of individuals who are drawn to the lifestyle. Highborn or low, broken, hopeful, jaded, greedy, courageous, psychotic, honourable, wise... I wanted to put a cast of characters in an environment where they could be themselves and see how it played out.

So I created the ship and its crew and put at the heart of it three lost souls who could brave the storm together: Jon, Tom, and Captain Baltsaros.
I also wanted to write up a fantasy world where I could flex my history muscles a bit and play around with the setting. It's something I've always loved doing in my art, mixing and matching pieces from history to make something new: Byzantine icons with modern elements, using archaic techniques to create futuristic pieces, pairing figures from history that did not coexist. And I wanted the world of Baal's Heart had to be like ours, where the existence of the supernatural is maintained by some, but not a proven fact... just a possibility.

So basically historical fantasy without dragons or wizards. :) 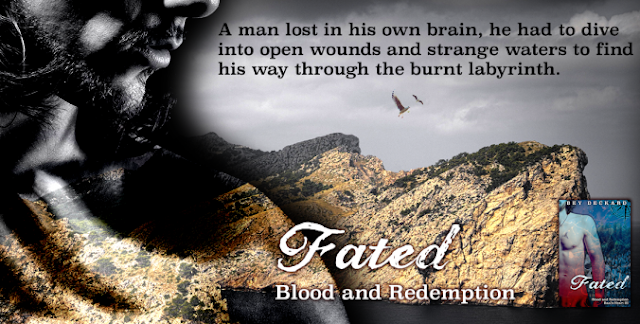 Was it surprising for you when Team Tom comments started popping up? (I'm in love with Tom BTW)
Yes and no... I found him extremely appealing, so I figured others would too, but I had no idea that people would take to the books as much as they did. I came into this author thing with very little expectation and I'm floored by the response. A big thank you to everyone for that!

I love that people love Tom so much. He's a really great character to work with.

You have written historical fantasy ménage, super dark, trans and more. Do you have a favorite?
Hm. Good question. I think Caged will always be my favourite, because it was my first, but Better the Devil You Know is a close second because that story has been brewing in my head for at least a decade and I'm really happy with how it turned out.


Is there anything you haven't tried yet but are planning?
Straight up fantasy. I'm actually writing a book right now called Kestrel's Talon that takes place in a fantasy world. I'm about halfway through writing it and I am very curious to see what people think of it.


What do you do for inspiration when you're stuck while writing a story?
If there's one thing that I'm not lacking in is inspiration. I haven't written enough stuff to run out of ideas/get stuck yet. I'm still so new at writing... my head is going to burst with all the things I haven't written down yet. I have to force myself to step away for a few days, just so that I don't burn out.


Do you normally choose the book cover or write the story first? You have designed most of your covers correct?
Normally I get an idea of what I want the cover to look like as I'm writing. Sometimes I make myself wait until the book is done, so creating the cover is sort of like a reward for finishing. Sometimes, like I mentioned above, I need to take a break from writing and that's when I might create the cover. And yes - I've designed all my own covers.

What projects are you working on for 2016?
Kestrel's Talon will hopefully get published early this year. Then I have book #3 from The Actor's Circle to finish but I'm not sure if I'm going to release another Baal's Heart book before that or not. I also have a few other books that are in different stages of completion. I write what drives me the most... so planning for things is a little difficult. 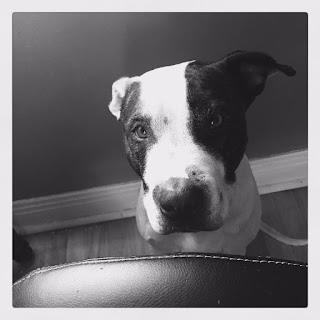 Fruit- Papaya. Seriously. I can eat papaya (or pawpaw heh) every day.

Thing to do on a rainy day- Ignore the rain and Murphy's long, drawn out sighs (he hates the rain too) and write. Or watch a movie.

Thing to do on a sunny day- in summer, definitely sit outside. Winter? Sit in my sunny office and write.
So... a lot of writing.

:)
Thanks for having me, Toni!

A completely unedited excerpt from The Window in Between (The Actor's Circle #3):


Danny ducked and got into the backseat of the rented limousine, happy that the car was warm and dry. The weather had taken a turn, and the temperature was dipping further as the sun went down. Stuart’s cap was pulled low, and he was wearing a scarf, but the tip of his nose was red.

“You sure you don’t mind dropping me off?” asked Stuart, politely hopeful.
“Of course not! It’s not like you’re putting me out, Stu. You’re on the bloody way,” said Danny.
Stuart just chuckled and nodded.
Neville got into the driver’s seat, and they were soon off. However, it was slow going with the heavy traffic.
“So,” said Stuart into a break in the conversation. He gestured to the driver. “Does Neville accompany you to on trips or is he local?”
“Aye, he’s from Essex, but he comes back to the States with me,” replied Danny, watching a few scattered raindrops hit the windshield.
“Ah. And does he ever join you for meals, or do you always make him sit by himself?”
Danny turned to Stuart with his brows raised.
“He eats when he’s off duty.”
“Sorry, I’m just curious. I’ve never had a driver… Or a bodyguard. Does he live with you?”
“Aye.”
“Ah. And… do you two never just… hang out together?”
Danny looked up at the rear-view mirror and met Neville’s eyes.
“No,” Danny said, and then continued with: “I like to think of life as a limousine. Though we are all riding together, we must remember our places. There's a front seat and a back seat and a window in between.”
Stuart laughed.
“That’s rather classist of you. What’s that from?”
“Sabrina,” said Danny with a tight smile. “John Williams says it to Bogart who’s sitting in the back seat. But I just mean that I like to keep things professional. Neville’s paid for his services… not to sit on his arse and drink a pint. Mixing business and pleasure—nothing good comes of it, aye?”
“I suppose. It just seems—” Stuart made a vague, almost embarrassed gesture.
Impersonal? Lonely? Sad? thought Danny, his irritation sparking. “It’s just fine,” he said, frowning at Stuart.
Stuart just nodded quickly and gave him a faint smile. Thankfully, the limo came to a stop a moment later. Stuart gathered his shopping and tugged the neck of his coat closed.
“Thanks for lunch, Danny. It was nice to see you.”
Danny gave him a genuine smile. It wasn’t Stuart’s fault that Danny was on edge. He was just tired and stressed.
“My pleasure, Stu. Keep your pecker up, mate. And good luck with that man of yours,” he said, squeezing Stuart’s proffered hand. Then he gave him a saucy wink. “And… Welcome to the club.” Stuart gave a startled-sounding laugh, and then just nodded before getting out of the car.
Danny watched Stuart walk a few paces away and pause, searching for his keys.
“New North Place, sir?” asked Neville.
“What? Why?”
“You have that interview with Vice magazine,” his driver looked at him in the rear-view.
“Feck. I forgot about that. What time?”
“Half three.”
His phone showed that it was only just two. After letting out a long, frustrated sigh, Danny nodded.
“Aye. I can have a pint or three at the Old Kings Head until it’s time.”
“Are you sure that’s wise, sir?” Neville’s eyebrows were high.
“Jaysus fuck. Your opinion is not fucking wanted. Just drive.”
“Yes, sir.”


More Books From This Author