Rise & Fall is one of my top reads for 2015. Charlie was so kind as to answer some questions (Dex & Sloane even dropped by a bit). Also keep reading for an excerpt from Charlie's upcoming novel Forgive and Forget. 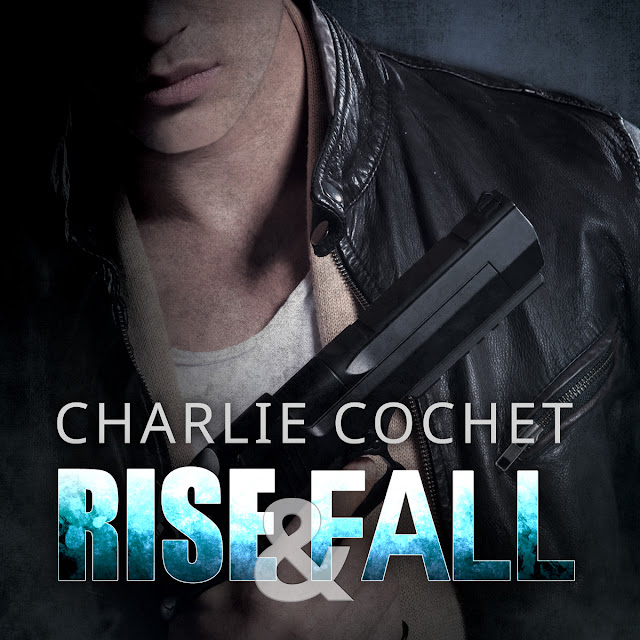 After an attack by the Coalition leaves THIRDS Team Leader Sloane Brodie critically injured, agent Dexter J. Daley swears to make Beck Hogan pay for what he’s done. But Dex’s plans for retribution are short-lived. With Ash still on leave with his own injuries, Sloane in the hospital, and Destructive Delta in the Coalition’s crosshairs, Lieutenant Sparks isn’t taking any chances. Dex’s team is pulled from the case, with the investigation handed to Team Leader Sebastian Hobbs. Dex refuses to stand by while another team goes after Hogan, and decides to put his old HPF detective skills to work to find Hogan before Theta Destructive, no matter the cost.
With a lengthy and painful recovery ahead of him, the last thing Sloane needs is his partner out scouring the city, especially when the lies—however well intentioned—begin to spiral out of control. Sloane is all too familiar with the desire to retaliate, but some things are more important, like the man who’s pledged to stand beside him. As Dex starts down a dark path, it’s up to Sloane to show him what’s at stake, and finally put a name to what’s in his heart.

Are you surprised by the popularity and fandom of the Thirds series? 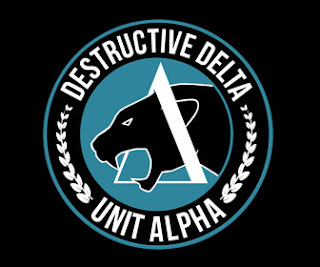 Absolutely! I never expected it to become what it has. When I set out to write the series, it was something I wanted to have fun with, and since it was going to be my biggest series to date—as far as the length of the stories and number of books was concerned—I figured I had to go big or go home. With as many characters and books as this series was going to be, I wanted to put my all into it by trying to offer readers a fun experience. I’m a big fandom buff, so I’m familiar with the major love for a movie or TV show, along with the need to get all geeky over extras from my favorite characters. Who doesn’t want more of the characters they laugh and cry with? Which is why I created THIRDS HQ, THIRDS Thursdays, and all the little extras for the series. It’s also something we’re seeing a lot more of with books, especially YA books.

Do you prefer writing any genre more or find one easier to write? Is there anything you haven't tried yet but are planning?

I write whichever story grabs me, regardless of genre. I’ve now written historical, contemporary, and paranormal. My next big series is an Urban Fantasy series which I’m really looking forward to. I’ll also be writing more contemporary. Contemporary is a new one for me. I’ve got some novel length stories on my schedule. I’ve always wanted to write a fairytale, so maybe I’ll write one of those at some point.

Do these characters speak to you during your regular day to day activities. I can't imagine that Dex would ever shut up. He probably has something to say about everything. ;)

There are plenty of instances where I might see something, or hear something, and snicker to myself because it’s so Dex. Things like T-shirts, internet Memes, songs, snacks. There’s always something to remind me of one of the THIRDS guys.

What would you sing at karaoke night?

Definitely something 80s. I think me and Dex have the 80s covered.
Something rocking, like Pat Benatar, Def Leppard, or Queen.

Do you believe in love at first sight?

Don’t know about love at first sight. Not saying it can’t happen because I’m sure there are folks out there who saw the love of their life and just knew. I do believe in an instant spark. Seeing someone and just being knocked off your feet.

What were some of your favorite books growing up?

I read a lot of romance growing up. A lot. The majority probably Harlequin. Romances from Amanda Quick, Nora Roberts, Jayne Ann Krentz, Jude Deveraux, Johanna Lindsey, Candice Camp, Jane Austen. So many. But I also read a lot of mystery/suspense and detective books. I love Raymond Chandler’s Philip Marlowe books. Dashiell Hammett. I read a lot of James Patterson as well.

For 2016 we have some more THIRDS books scheduled, as well as a Science Fiction romantic novella, my Dreamspun Desire novel for Dreamspinner Press called Forgive and Forget, plus a couple of other shorts.

Dex: The 80s all the way. What other decade will you find hair teased with enough hairspray to warrant a hazmat team entourage? And the school portraits? Who doesn’t own a school photo with a neon laser lightshow backdrop? Hands up who owned a ski suit they wore out in public yet had never gone skiing a day in their life? Come on, I know you’re out there. It’s okay. I won’t judge. I might laugh though. Don’t worry, Tony owned a pair of parachute pants, so you have nothing to feel embarrassed about.

Sloane: That’s a tough one. For the music, I would probably say sixties, seventies, and part of the eighties. I’m a fan of classic rock.  For the fashion, I’d say I’m pretty happy with now. I’m a T-shirt and jeans kind of guy, but there are also all kinds of options. It’s easy to come up with your own style and no one blinks an eye.

Charlie: Man, that’s a tough one. I’m going to go with something a little more modern and say Lady Gaga’s Bad Romance because I was just blown away by it the first time I saw it. I loved it.

Sloane: I’ve probably watched more music videos since I met Dex than I have in the whole of my life.

Charlie: Carry On Wayward Son by Kansas. I know. I’m a nerd. 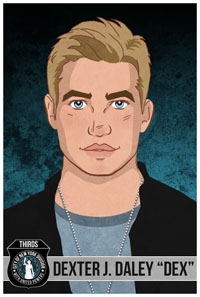 Dex: Depends on who’s calling. If it’s Sloane, it’s Rock You Like a Hurricane by the Scorpions. Though I like to change it up every few weeks. For Calvin, it’s Axel Foley’s theme from Beverly Hills Cop. Hobbs gets a kick out of it every time I make Cal call my phone. For Hobbs, it’s Survivor’s Eye of the Tiger. For Tony it’s Soul Man by Sam & Dave. The Soul Men vinyl was his favorite record when he was a kid, and he still owns it. Cael it’s Video Killed the Radio Star by the Bangles. Ash, The Imperial March.

Sloane: For everyone except Dex it’s just a regular ringing sound. Exciting I know. But that’s what caller ID is for. For Dex it’s Def Leppard’s Pour Some Sugar on Me. I’ll give you one guess who programmed it. Thing is, I can’t change it. Cael did something to it which means no matter what I do, I can’t change it. The option’s just gone. Nothing like being in the middle of an interrogation and having that song come on.

Charlie: I’m not a fan of commercials, but if I had to pick any it would probably be for anything playing a trailer for a movie or TV show I want to see. 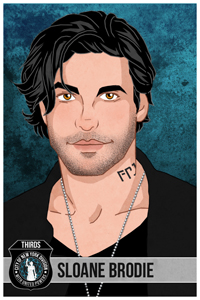 Dex: They don’t make them like they used to. My favorites are probably the infomercial type. You know the ones. Where someone picks up a gallon milk and the second they try to pour the milk, the thing implodes or they fumble with it like it was a football they’d just caught and were trying to pass. All because they didn’t have the magic milk pourer or whatever product you just need to have or else your milk is doomed! Doomed I say! You’re destined to have a future of dry cereal for eternity! Those are the best commercials. Oh, and the puppy commercials, for like pet supply stores or puppy food. So many cute fluffy puppies.

Sloane: We’re not getting a puppy. I don’t like commercials.

Dex: Straight and to the point, babe. You’re so smart. That’s why I love you.

Sloane: I love you too. But we’re still not getting a puppy.

Sloane: No I won’t. We already have an excited puppy in the house. We don’t need another one.


“Joe, look!” Donnie pointed to the stained grass just under the man’s head.
“Damn, is that what I think it is?” Joe carefully turned the guy’s head, finding the black hair at the back matted with blood. “Looks like someone got him good. We need to call an ambulance.”
Donnie hesitated before his instincts kicked in, and then he checked for breathing and signs of a pulse. “His breathing’s shallow, but he’s alive. He’s probably got a concussion, so it’s not good for him to be out.”
“I don’t know anything about head wounds other than the kind Bea gives me, and luckily, they’re not enough to get me concussed. Not yet, anyway.”
“If he’s got a concussion and he’s out, it could damage his brain. Problem is, we don’t know how long he’s been out for. We should—”
The man shot out his hand and grabbed a hold of Joe’s wrist, causing Donnie to shriek and Joe to nearly jump out of his skin. “Sweet Jesus!” Joe was about to tell Donnie to run and call an ambulance when he realized the injured man was trying to talk. “It’s okay. We’re going to get you to a hospital, just hang on.”
The man made a noise that sounded an awful lot like “no,” but that couldn’t be right. Maybe the poor bastard was out of his head. Joe leaned in when the guy lifted his head. “No cops,” he slurred, tightening his grip on Joe’s arm, his voice so low and gravelly Joe wouldn’t have heard him if he hadn’t been so close. “No hospital.”
“What?” Joe shook his head and did his best to remain calm. “Listen, buddy, someone knocked you over the head. You need medical attention.”
“Please, no cops. Help me.”
“I’m trying to help, but the best I can do is get you to a hospital. I’m not a doctor.”
“They’ll… kill me. Cops… dead…. No hospital. Please.” With that, the guy collapsed back onto the ground.
Well, those were certainly words he didn’t care to hear in the same sentence. 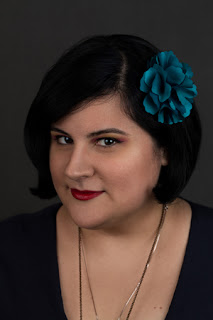 Charlie Cochet is an author by day and artist by night. Always quick to succumb to the whispers of
her wayward muse, no star is out of reach when following her passion. From Historical to Fantasy, Contemporary to Science Fiction, there’s bound to be plenty of mischief for her heroes to find themselves in, and plenty of romance, too!

Currently residing in South Florida, Charlie looks forward to migrating to a land where the weather includes seasons other than hot, hotter, and boy, it’s hot! When she isn't writing, she can usually be found reading, drawing, or watching movies. She runs on coffee, thrives on music, and loves to hear from readers.

MORE READS FROM THIS AUTHOR